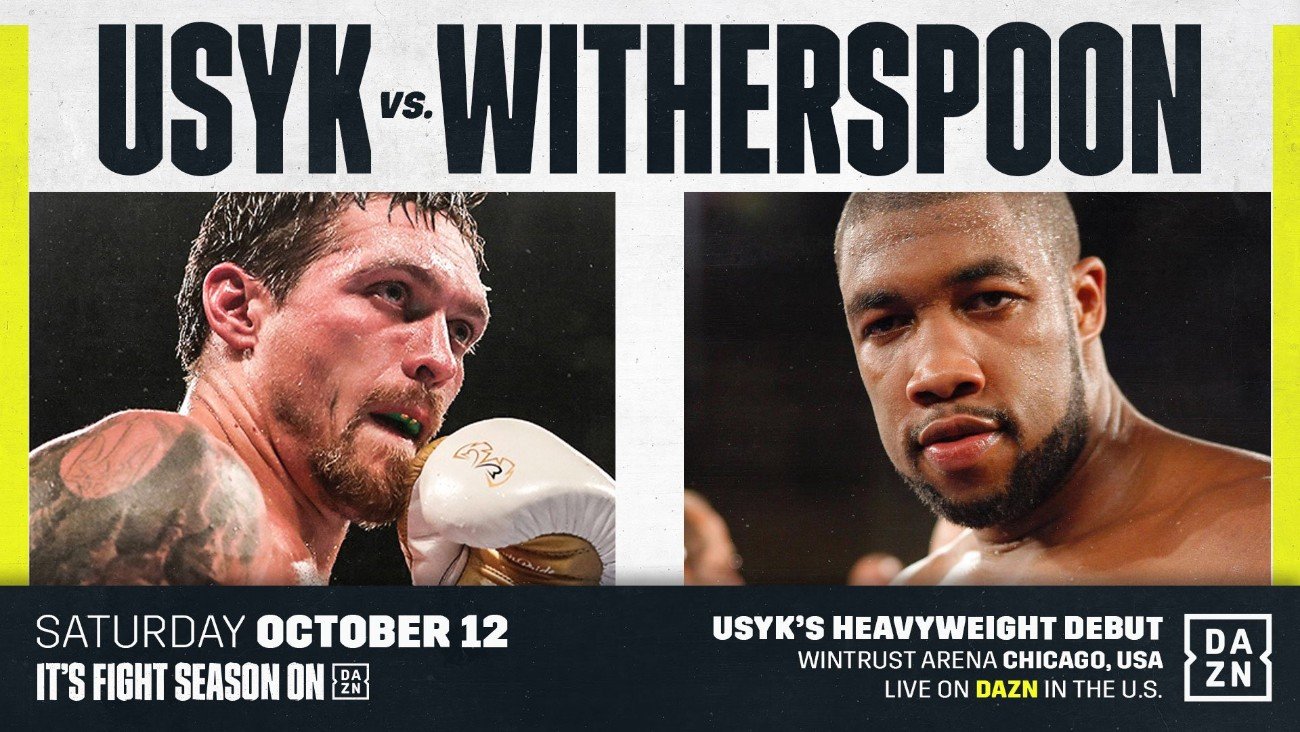 Oleksandr Usyk will be making his heavyweight debut this Saturday night against Chazz Witherspoon (38-3, 29 KOs) on DAZN at the Wintrust Arena in Chicago. After six years as a professional, and unifying the cruiserweight division, Usyk (16-0, 12 KOs) is moving up to heavyweight in search of bigger paydays.

Matchroom Boxing promoter Eddie Hearn is counting on Usyk being successful at heavyweight. Hearn believes in Usyk, and that’s why he signed him to his promotional stable. He thinks Usyk will be able to do the same thing at heavyweight that he did at cruiserweight in unifying the division. However, there’s a difference between the guys that Usyk beat to win his 4 titles at cruiserweight compared to the bigger, stronger and arguably more talented heavyweights.

It’s interesting that Hearn didn’t make the effort to put Usyk in a real test in his heavyweight debut by matching him against a relevant contender. That’s not a knock on the 38-year-old Witherspoon. He was a good heavyweight 11 years ago, but he’s not a top tier fighter at this point in his career. The guy that Witherspoon is replacing, Tyrone Spong, wasn’t one of the elite heavyweights either. He was some former kick-boxer that the World Boxing Organization gave a high ranking to without him beating anyone good.

Usyk won his 4 world titles at cruiserweight beating these guys:

Usyk’s  12 round majority decision win over Briedis in January 2018 was controversial. A lot of boxing fans thought Briedis did enough to get the victory. But even if you want to say Usyk deserved the win, the fight was still VERY close. If Usyk can’t beat a fighter like Briedis in a conclusive manner, how is he going to beat the likes of Anthony Joshua, Deontay Wilder, Tyson Fury and Andy Ruiz Jr. at heavyweight? The simple answer is Usyk probably won’t. Small guys with no power in their punches don’t do well at heavyweight.

Usyk will be getting a huge payday though. He’s the WBO mandatory at heavyweight for Ruiz Jr., and he’s likely to be fighting the winner of the Joshua vs. Ruiz rematch in 2020. With money that Usyk will get in facing the winner of that fight, it doesn’t matter if he loses. He’s going to get millions in being the challenger. It’s a win-win for Usyk.

Usyk, 32, says he wants to unify the heavyweight division, and then retire, but it’s not going to be easy for him to accomplish that goal. The 6’3″ southpaw Usyk weighs around the same as WBC heavyweight champion Deontay Wilder at 220 pounds, but he lacks his huge power and speed. Usyk is a hit and move fighter entering a division where you need to possess power to excel.

In terms of height and reach, Usyk is similar to some of the current heavyweights like Andy Ruiz Jr., Alexander Povetkin and Joseph Parker. However, Usyk doesn’t have their punching power, and he’s not as fast as Ruiz Jr. Usyk also doesn’t throw combinations the way that Ruiz does.

In the long distant past, small heavyweights like Rocky Marciano and Joe Frazier excelled. That was a long time ago though, and the heavyweight division has changed a lot since then. Nowadays, you’ve got fighters that are in the 6’6″ to 6’9″ range in Joshua, Wilder and Tyson Fury, and you’ve got to have size to do well. 5’11” Mike Tyson captured world titles despite being short, but he had blinding hand speed and huge power. Usyk doesn’t possess blazing speed, and he’s not a big puncher. Even at cruiserweight, Usyk wasn’t a big puncher. Usyk’s last opponent Tony Bellew possessed more power than him.

You hate to say it but it’s not likely that Usyk will do well at heavyweight. He’ll get a big payday fighting for a world title, but he’s probably not going to win a world title unless it’s one of the secondary straps. Manuel Charr holds down the WBA secondary heavyweight title. Usyk is good enough to beat that guy, but he won’t be seen among the best. He’s got to beat the likes of Wilder, Fury, Ruiz and Joshua to be seen as one of the elite heavyweights.

It would make a nice story if Usyk is as successful at heavyweight as he was at cruiserweight, but it’s unlikely. With Usyk’s lack of power, he’s going to be FORCED to win his fights by decision at heavyweight. If Usyk has to go 12 rounds each time to beat guys like Joshua and Wilder, he’s not going to last long at heavyweight before he’s worn down. That’s if Usyk can even go 12 rounds without those giant guys. The odds are against Usyk doing well in this division.

A special thank you to the @chicagobulls and good luck tomorrow night! 📲😉 #RunWithUs pic.twitter.com/JupZoZMHGZ