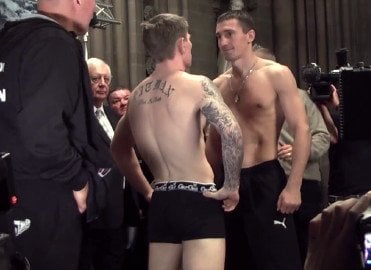 By Michael Collins: Ricky Hatton is staging his comeback tonight against Vyacheslav Senchenko in Manchester, England, and Hatton has set it up to where he might be vulnerable to getting knocked out cold once again due to a variety of factors. The first thing that Hatton has going for him in this fight is that he’s coming off of a 3 1/2 year retirement without a tune-up.

Senchenko is definitely a world class fighter despite being manhandled by the light hitting Paulie Malignaggi in his last fight. Senchenko is at least fringe level world class, and that’s more than good enough to beat a short, rusty fighter like Hatton, whose best weight at 140, not 147.

Hatton didn’t want to bother with taking a tune-up fight and is jumping straight into the fire so to speak with the Senchenko bout. That’s obviously not the smartest thing that a person can do. I know Hatton likes to do things his own way, but this is one thing that you don’t want to mess around with. Another problem that Hatton has for this fight is all the weight that he had to take off just to make 147.

If you saw how huge Hatton was during his retirement it was pretty shocking how much weight he put on for such a short person. At only 5’7″, Hatton ate his way to well over 200 pounds, and that wasn’t muscle that he put on. Hatton has since dropped 70 pounds for this fight, losing much of it during training camp.

For any other to even take off 30 to 40 pounds of fat that’s a huge amount of weight. But with Hatton losing a massive 70 pounds of fat, and then taking on a fighter like Senchenko. This could potentially hurt Hatton by taking away his power, and stamina. His stamina is probably taking a huge hit anyway due to the 3 1/2 years out of the ring, but then to have to drop 70 pounds to make weight, that’s absurd.

If Hatton loses tonight by knockout I think you have to look at the weight as the #1 cause of the lose with the lack of a tune-up as being #2 followed by the long time off from the sport.