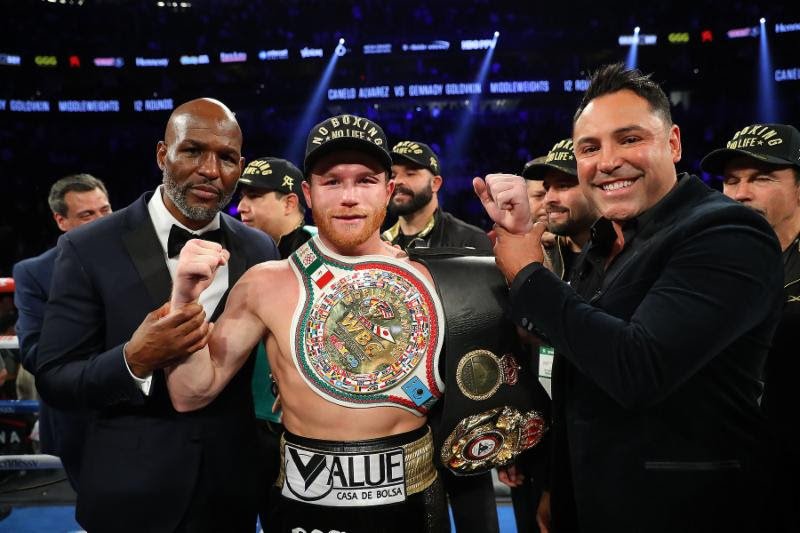 “We are extremely disappointed at the IBF for forcing the world’s best fighter to relinquish his world title. We have been in serious negotiations with Sergiy Derevyanchenko’s promoter. We offered his team an unprecedented amount of money for a fighter of his limited stature and limited popularity, but the truth is that I’m now certain they never had any intention of making a deal. But instead they wanted to force us to relinquish Canelo’s belt. This is an insult to boxing and more importantly an insult to the boxing fans of the world. This decision validates already existing concerns about the credibility of the IBF championship. Canelo inherited a mandatory challenger by defeating Daniel Jacobs, the man who beat Derevyanchenko, so to strip him of his title without giving him enough time to make the best fight possible is truly what is wrong with boxing, and I plan to aggressively consider all legal actions possible.”

LOS ANGELES (July 17, 2019): Golden Boy and Canelo Alvarez have made the strategic decision to postpone their typical September fight. The decision was made in an effort to secure the right opponent and to do justice to the level of promotion required for a boxing star of his magnitude. Though Canelo typically fights in May and September, it is not without precedent to fight later in the year as Canelo did fight in December of 2018 in Madison Square Garden. Canelo’s next fight will now take place later in 2019.

“As a Mexican, it’s a responsibility and an honor to represent my country in both May and September,” said Canelo Alvarez. “Those are my dates. However, as a world champion in multiple weight classes, I also have the responsibility of delivering the most exciting and competitive fights possible. That’s why Golden Boy and my team have decided to postpone the date in order to do right by my fans by promoting the best fight possible and with the best opponent possible.”