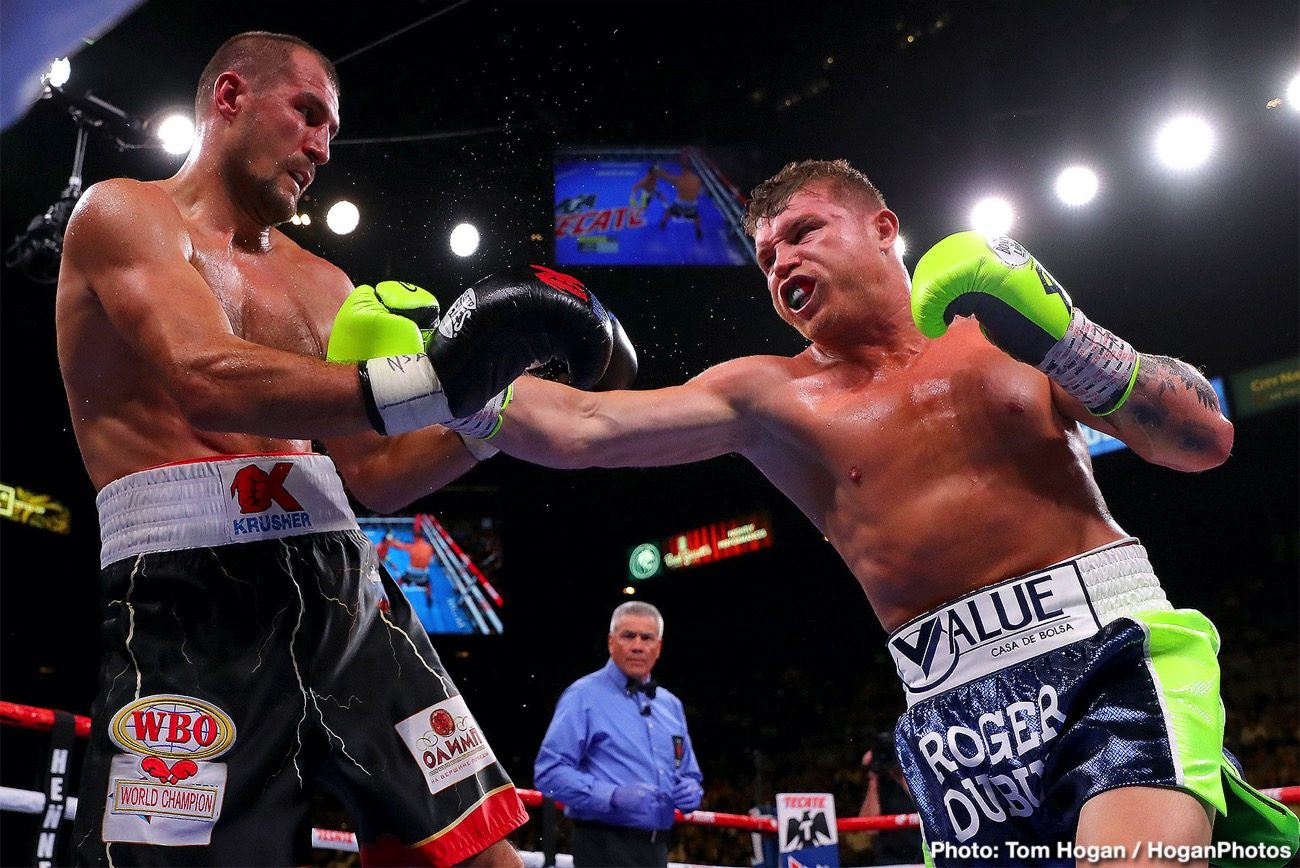 Former 175-lb champion Badou Jack says last Saturday’s fight between WBO light heavyweight champion Sergey Kovalev and Saul Canelo Alvarez was “boring” and he thinks it almost looked like a “fixed” fight. Jack is obviously talking about how Kovalev (34-4-1, 29 KOs) didn’t attack Canelo Alvarez (53-1-2, 36 KOs) with aggression, and he wasn’t throwing punches with power in the fight. Kovalev looked like he was fighting at half speed the entire fight.

Unfortunately for Canelo, it was like watching a replay of his fight with a weight drained Julio Cesar Chavez Jr. That was supposed to be an exciting fight, but Chavez Jr. was so drained from making the catchweight, he fought like a zombie. Kovalev wasn’t much better in terms of his energy. It didn’t look like he was tired though. Kovalev fought like he intentionally not throwing his punches hard for some reason.

Canelo won the fight by an 11th round knockout after dropping Kovalev with a left followed by a right at the MGM Grand Garden Arena in Las Vegas, Nevada.

What has a lot of boxing fans suspecting something fishy was how weak Kovalev’s jabs were. His jab is one of the best in boxing, and he had knocked out his last opponent Anthony Yarde with this punch last August. But against Canelo, Kovalev was just touching him with the jab, and throwing it so slow that it made it easy for the Mexican star to counter him.

Badou Jack says Canelo vs. Kovalev looked like it was almost “fixed”

“It was a good right hand, and a good finish,” said Badou Jack to Fighthub about the ending of the Canelo vs. Kovalev fight. “I thought it was a boring fight, but you’ve got to respect both guys. Canelo knocked him out, but it looked like Kovalev didn’t really. He wasn’t mean. It was almost like it was fixed, but I don’t know. Respect to Canelo, he got the job done. He broke him down, hurt him, and knocked him out. I didn’t score it, but it was really close,” said Jack.

There are a lot of people wondering why Kovalev at some point in the fight didn’t throw with maximum power. Kovalev said afterwards that he got tired in the sixth round, but that doesn’t explain why he wasn’t throwing with power in the first six rounds. He wasn’t throwing his jab with power, and that’s the easy punch to throw.

If this was Kovalev’s trainer Buddy McGirt’s idea for him to fight like this, then he needs to seriously think about changing him out for a different coach. McGirt should have had Kovalev make adjustments early on to start attacking Canelo. He had to know that the fight was in Las Vegas, and that Canelo has a history of winning controversial decisions in that city. For McGirt to not get on Kovalev’s case about him throwing weak shots, it looks strange.

With Kovalev’s advanced age, he can’t afford to be fighting at half speed and losing to little guys like Canelo. This was a VERY winnable fight for Kovalev if he’d attacked Canelo with aggression. The one round where Kovalev did seem to sit down on his shots in the 8th, he had him in serious distress. Canelo ran around the ring the entire round, and looked like he was coming unglued. What’s odd is that Kovalev went away from attacking Canelo in the next round, and went back to throwing weak shots. Why would Kovalev do that? Only he knows.

If Kovalev is going to continue his career after this fight, he probably needs a new trainer that is responsive to what’s happening in the ring. Everyone could see that Kovalev was giving away the fight by throwing weak shots, and let Canelo control the action. It’s troubling that McGirt couldn’t see that Kovalev’s game plan wasn’t going to work.

That game plan, if you want to call it that, looked like it was thrown together without much thought. McGirt looked like he was disengaged during the fight. Poor Kovalev might as well have been out there by himself. But then again, if he didn’t want to fight hard, then you can’t blame McGirt. If this was the plan to put in a minimal effort at winning, then Kovalev accomplished that goal.

Canelo didn’t show that he belongs at 175. Off this performance, Canelo would lose to all of these light heavyweights:

McGirt should have been able to spot that Kovalev was losing the rounds, and was going to gas out anyway. It would have been better for Kovalev to go all out for six rounds hitting Canelo with his hardest shots rather than throwing weak punches, hoping to go the distance. The fight was in Las Vegas. McGirt should have known going in that Kovalev NEEDED a knockout for him to win.

It was obvious that the end result of Kovalev treating the fight like a sparring match was going to end badly for him sooner or later.

“He did really good. That was a great shot,” said Jean Pascal to Fighthub in reacting to Canelo’s win over Kovalev. “Canelo, let’s unify the belts. I’ve got the WBA, and you’ve got the WBO. Let’s make it happen. Honestly, yes,” said Pascal when asked if he was impressed with Canelo’s performance.

Well, Kovalev definitely isn’t the same fighter he once was if he’s going to just tap his opponents rather than throwing with authority like he used to do. If Kovalev is going to continue to fight like that, then he should retire, because he’s not going to beat anyone. We don’t know if Kovalev even tried to win. All we can say is Kovalev throw weak shots for 11 rounds, and was knocked out. The outcome was predictable from the 1st round. You don’t throw weak shots against Canelo and expect to win.

The secondary champion is Pascal, while the true champion is WBA Super World belt holder Dmitry Bivol. If Canelo is going to fight a unification match involving the WBA title, he would need to face Bivol rather than Pascal. All the talk that Canelo did last Saturday about wanting to make history and fight the best, he would be laughed at if he fought Pascal rather than Bivol or IBF/WBC champion Artur Beterbiev at 175.