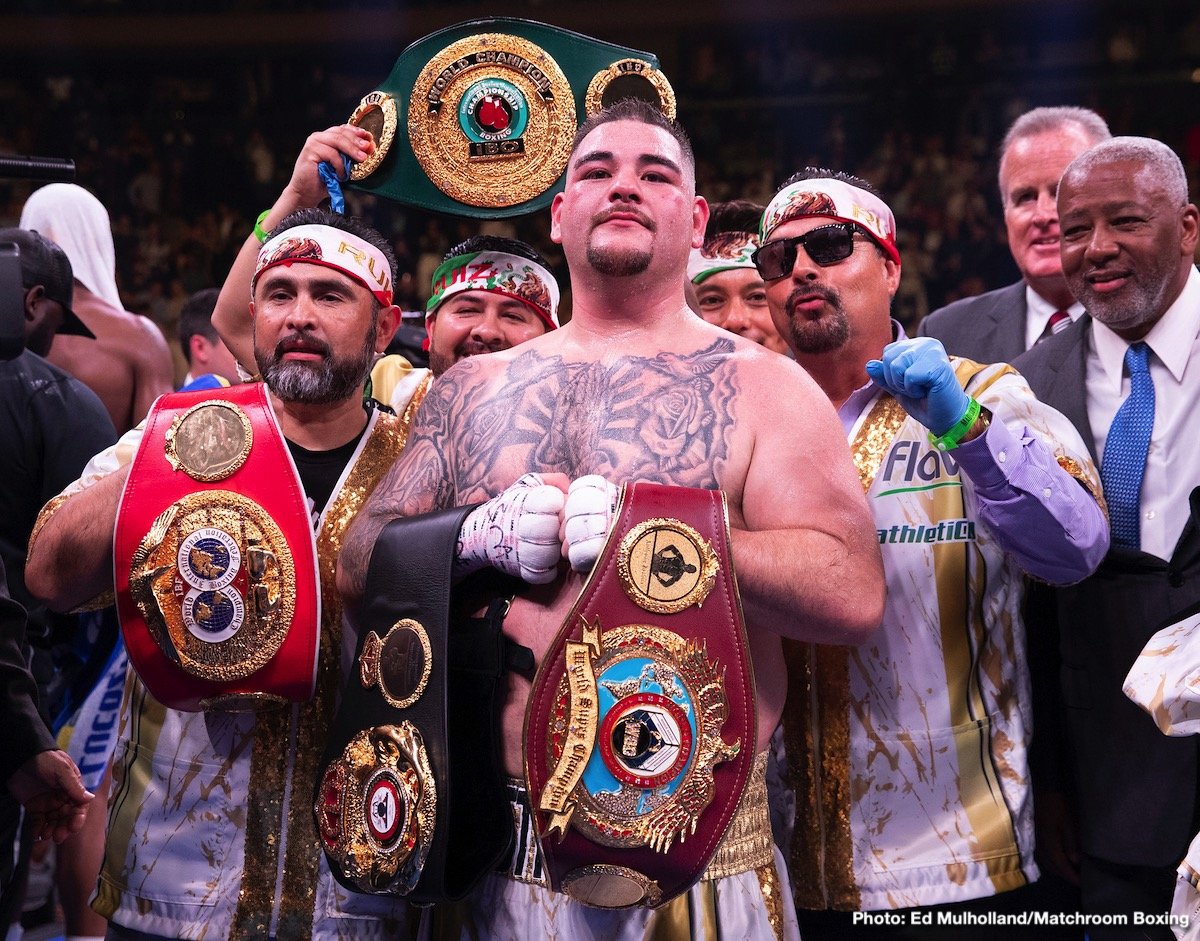 WBA/IBF/WBO heavyweight champ Andy Ruiz spoke on The Joe Rogan Show recently, and the Mexican/American “Destroyer” said the details regarding his big rematch fight with Anthony Joshua will be known soon; details such as venue of the rematch. Ruiz again stated firmly that the return will not be happening in the UK. Las Vegas, Los Angeles and New York are all possibilities.

And Ruiz spoke briefly on what he wants to do after the rematch has been fought. Ruiz obviously feels he will repeat his big win of June 1, and he then wants to fight both Deontay Wilder and Tyson Fury – “anybody,” Ruiz said.

Fans are divided over who wins the Ruiz-Joshua II showdown. Many feel Ruiz forever ruined Joshua with what he did to him two months ago, while others are of the belief that A.J merely had a bad night and can come back. If Ruiz does score another win over Joshua he will become arguably the biggest player in the division. And fights with Wilder and Fury would of course be massive. But will boxing politics allow these fights to take place?

Oleksandr Usyk is the WBO mandatory, and the former unified cruiserweight king spoke recently of his desire to fight with Ruiz-Joshua rematch winner. Ruiz might risk losing his WBO belt if he doesn’t agree to fight Usyk next. And as we know, Wilder and Fury have their own score to settle, with a rematch agreed for next year (both men to take an interim fight: Wilder against Luis Ortiz, in yet another rematch, Fury against TBA, possibly Charles Martin).

But when the smoke all clears, and assuming the belts have not been split up once again (regardless of who wins the Ruiz-Joshua rematch, this could happen), we should know around this time next year who the absolute best heavyweight in the world is. Will it be Ruiz who comes out on top? Will it be Wilder? Fury? Can Joshua bounce back from his sole pro defeat?

It’s a great time to be a fan of the heavyweight division and watching the battle for supremacy unfold promises to be a whole lot of fun. 2020 really could turn out to be some great year for the big men of the sport.