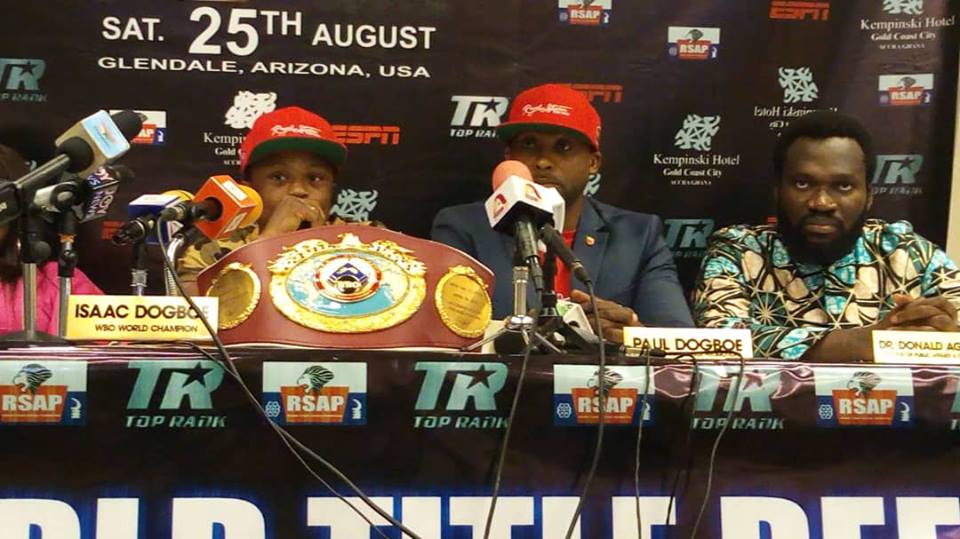 WBO junior featherweight champ, Isaac ‘Royal Storm’ Dogboe is sending out a strong warning to Japanese veteran, Hidenori Otake to get ready to be knocked out cold when the two clash in Glendale, Arizona three weeks hence on a Top Rank Promotions co-main event along with WBO lightweight titlist, Raymond Beltran’s own maiden title defence against Jose Pedraza.

A very confident Dogboe told a packed press conference in Accra on Friday morning about the great abilities of 37 year old Otake but insisted he will come out unscathed in what will be a first defence of the world title he won by destroying Jessie Magdaleno in Philadelphia back in April. 23 year old Dogboe (19-0, 12 KOs) has won four straight fights by stoppage since Filipino slugger, John Tabanao took him to the full 12 rounds in Accra exactly two years to his next fight date, 26 August, 2016. Since then, Juan Evaristo Aristule, Javier Chacon, Cesar Juarez and of course Jessie Magdaleno have all failed to last the distance with Dogboe in what were also the four most crucial fights of his professional career and he has marked Otake to be the next victim.

The young Ghanaian warrior, flanked by his dad/trainer, Paul Dogboe as well as his 13 year old kid brother with whom he often spars, Josiah at the plush Kempinski Hotel Gold Coast City in the Ghana capital, nevertheless spoke nicely about and paid glowing tribute to his opponent on August 25 in the USA after personally saying the opening prayer to bell off the media briefing. 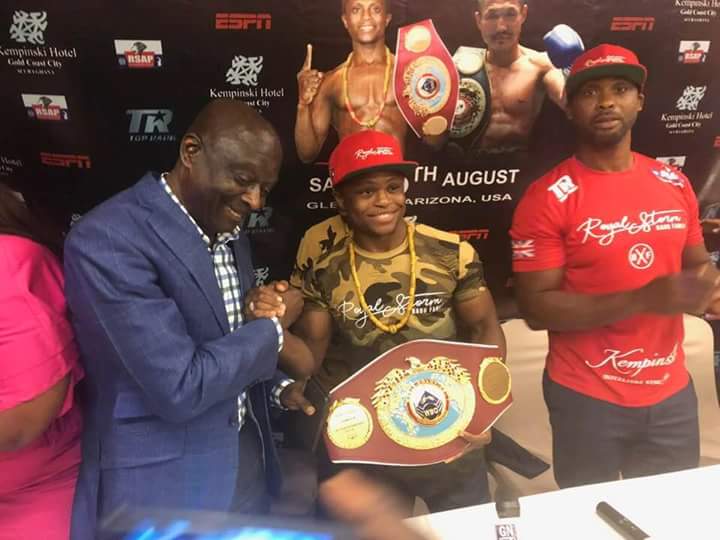 “It’s going to be fireworks, we call it the rumble in the desert, I can’t wait. Otake is in real trouble even though we don’t take him lightly. The guy is a nice guy but those kind of quiet people are the ones you have to look out for. I saw his last fight and he’s got a deadly right hand but we believe that we will take him back to the basics,” Isaac Dogboe explained.

“He is an avoided fighter by many champions, 36 fights, 31 wins, 37 years, 14 KOs, 2 losses, 3 draws. He hasn’t lost a fight in 4 years, 9 wins in four years, 5 by way of knockout. So you have to understand that the guy is a compact fighter, he’s strong, we are not taking him lightly,” Dogboe read out the entire stats on his upcoming opponent.

He however made it clear that facing and conquering troubles like the one presented in the form of Hidenori Otake is the hallmark of Team Dogboe and one which they are not relenting on come August 25 on the Top Rank collaborated show with his father’s Rising Star Africa Promotions to be screened live on ESPN.

“The thing with us is that the people many champions are willing to avoid, those are the people we want to fight. We want the people to know that we are a different breed, that wherever we go we take charge, we take control of the place. That is the place we want to be at because when we are able to overcome these challenges, these adversaries, that’s what makes us great,” the WBO junior featherweight king stated.

“I believe I was born to overcome adversity. All the opponents I’ve faced during my career, they’ve all been credible fighters. Opponents that people always said that I’m too young, it’s too early in my career to fight them.

“A lot of people have criticised my father for putting me against those people but we have always risen against those odds and we have overcome those adversaries and Otake is also going to fall,” Dogboe affirmed.