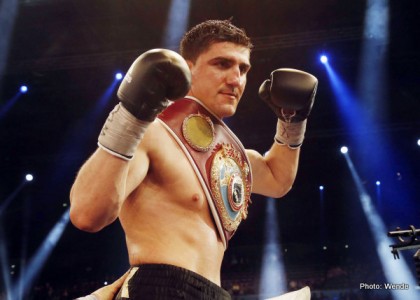 Yet, in spite of this, he’s actually pretty entertaining to watch. He’s got good power and hand-speed, has a knack for firing shots that catch the eye, and he almost always fires back viciously after getting tagged with a clean punch. This often leads to bitterly contested exchanges and make his fights more watchable than they really have any right to be.

Of course, there’s one other thing that can be said about Huck- he’s been awfully effective throughout the course of his career. A six year reign as WBO cruiserweight champion with thirteen successful title defenses serves as proof of that. Even the losses that he suffered were competitive affairs, especially the ultra-close majority decision defeat to then WBA heavyweight titleholder Alexander Povetkin.

So, yeah, Huck’s an ugly fighter to watch. But he usually finds a way to make it work- both for himself and for the viewer.

That was the case tonight in his bout at Hanover, Germany’s TUI Arena, against a tough Ukrainian named Dmytro Kucher.

After a strong start in the first couple of rounds, Huck found himself being forced onto the back foot by his taller opponent and seemed unable to find a way to land the same types of clubbing right hands that shook his opponent over the first two frames. Kucher (24-2-1, 18 KO’s) had success with the jab and to the body while pressing forward and worked his way back into the fight as a result. Early in the sixth, the challenger to Huck’s lightly regarded IBO trinket landed a nice right that seemed to jolt the Kapt’n. An emboldened Kucher attempted to follow up, only to have Huck roar back with several quick flurries to close out the round. In the eighth, Huck was stunned and cut by an accidental head-butt, and Kucher tried to capitalize after action resumed. In response, Huck met him head on and proceeded to stun him badly with a series of hard right hands. The Ukrainian valiantly fought back on unsteady legs, and after getting thrown to the mat by an overanxious and frustrated Huck, managed to gather himself and survive to the bell. Incredibly, Dmytro continued to press forward in the following rounds, but his punches had lost their snap and Huck was about to flurry effectively off the back foot and outwork his opponent over the final third of the fight.

After the twelve rounds were completed, the cards were tabulated, and it came as absolutely no surprise when cards of 117-111, 117-111, and 119-109 were announced in Huck’s favor. My personal scorecard was 116-112, but the only card that struck me as being somewhat unfair was the most lopsided of the three.

Either way, the thirty two year old Huck has now registered the fortieth victory of his career and can move on to face other challenges. With any luck, he might be able to secure a rematch with a fighter he once defeated, Denis Lebedev and win a couple of pieces of the cruiserweight crown. Or, perhaps he might be attempt to reclaim the WBO title he once held by meeting another Ukrainian, the fast-rising Oleksandr Usyk.

I’m interested to see how he might fare against either of these champions if he gains the opportunity to face them. He may be past his peak, but I think he’s still good enough to have some moments of success against these fighters…

Even if those moments are earned in the ugliest fashion possible.