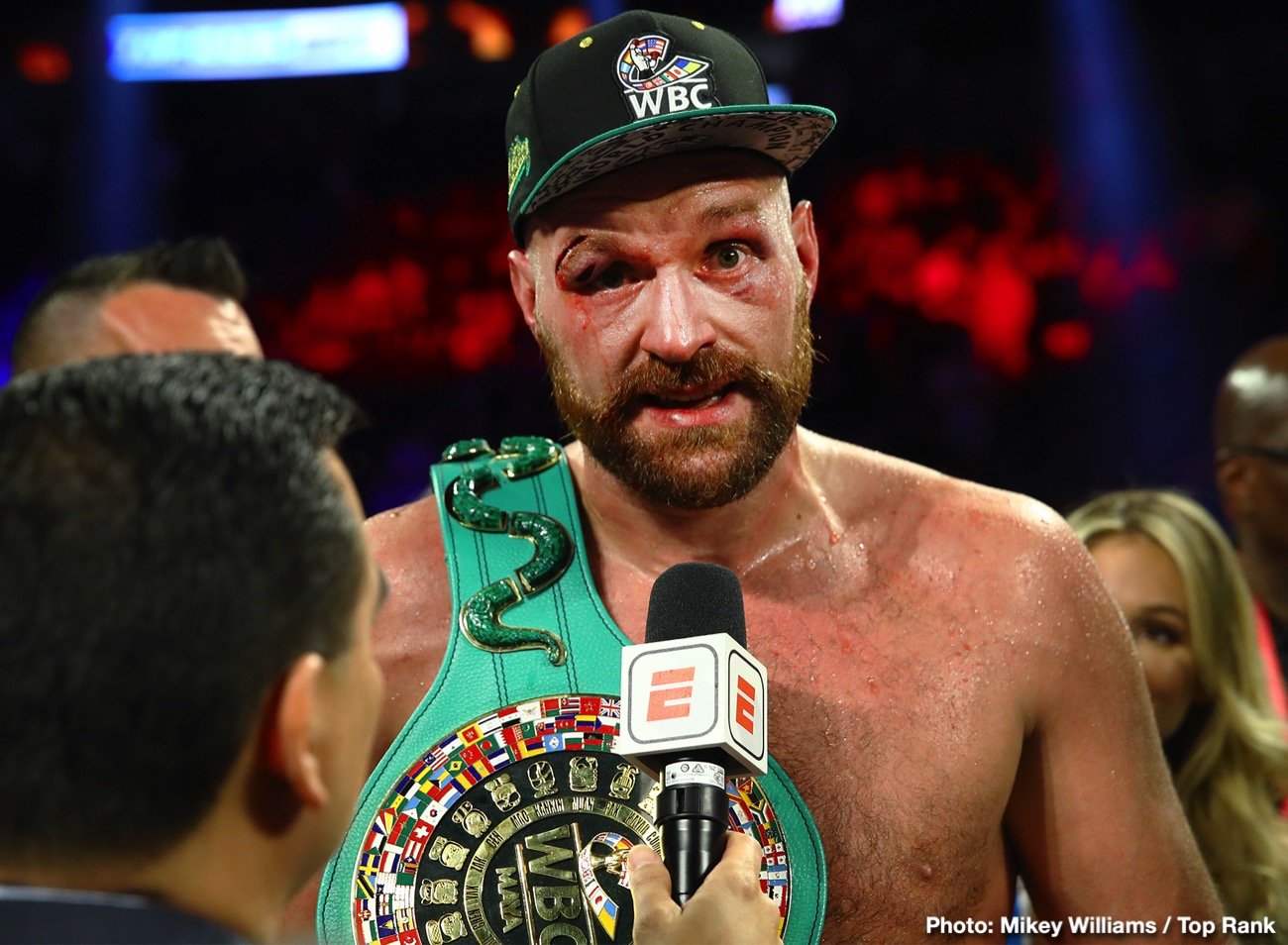 It’s still too soon to know for sure whether or not Tyson Fury will be able to fight as soon as February 22nd, the date of his scheduled and hugely anticipated return fight with Deontay Wilder. With the two cuts Fury suffered around his eye in Saturday night’s tougher than expected win over a game Otto Wallin requiring the services of a plastic surgeon’s handiwork, only time will tell if he can box again – or more crucially train and spar again – so soon.

Promoter Frank Warren initially said the doctor who inspected Fury’s cuts ahead of surgery told him the prognosis was Good, that the cuts should heal quite quickly. But Warren had since stated that the cuts could possibly enforce a delay to the Wilder rematch.

It is to be hoped that a delay, if there is one, is not overlong. It is also to be hoped that Wilder does not look at taking another fight instead if Fury is not fit to fight in February as planned. Remember, Wilder recently said how he would like to fight Andy Ruiz next (after he has dealt with his supposed November rematch with Luis Ortiz and assuming Ruiz beats Joshua on December 7) and the reigning WBC champ said he’d like Fury to take step aside money to permit him to do so.

Might Wilder insist on taking a right with Ruiz, or someone else, if Fury is not available on February 22? Woulld the powers that be look at trying to save the date and be happy to promote a Wilder fight involving an opponent other than Fury? Of course this is all speculation and nothing more and legally Wilder may have no choice but to fight Fury next (again, after he’s dealt with that Ortiz rematch), whether he has to wait for him or not.

So let’s look at the chances of Fury being able to fight again on February 22. This gives Fury a little over 5 months to both heal up and be able to train adequately (as Warren said, Fury needs to be at his absolute best going onto the Wilder rematch).

When it comes to the worst cuts suffered by a heavyweight over recent times, VitalI Klitschko, and his war with Lennox Lewis, springs to mind. Klitschko was the victim of some horrific facial wounds, wounds that at the time seemed to some like potential career-ending ones.

Amazingly, though, Klitschko was able to fight again less than six months later – stopping Kirk Johnson on December 6, having lost on that controversial TKO to Lewis on June 21. Okay, there are no real similarities between Vitali and the cuts he suffered and Tyson and his injuries, yet in being optimistic, if Klitschko was able to train and then fight as soon as he did after having his entire face rearranged by Lewis, then hopefully Fury will be able to do the same after picking up cuts that, although bad, were not as savage – generating a 6 or a 7 on the ‘Klitschko-ometer.’

Hopefully fans will get to see the return between Wilder and Fury on February 22, as we have been made to wait long enough already. And of more importance, let’s hope neither man wins as a result of cuts (re) opening up during the second fight.