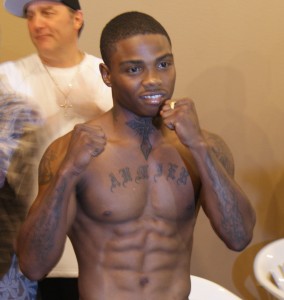 by Earl Orr VNewz: It was an exciting night of fights at the Las Vegas Sports Center last night, as Pochiro Promotions put together their first card, entitled “Hometown Throwdown”. The event was one of what is expected to be many more in the near future. It featured six bouts, with referees Tony Weeks and Robert Byrd alternating as the third men in the ring.

In the first fight, Bronson Stultz (Henderson, NV) scored the sole knockout of the evening over Eric Goodall, who put up a good fight until the accumulation of body punches thrown by Stultz eventually weakened and diminished him in the third round.

Next up, Cameron Krael (3-4-2, 0 KO) of Las Vegas, NV won a unanimous decision over Wilber Lopez in a four-round bout. Krael put up a good showing by walking Lopez down and pinning him against the ropes multiple times. He was also able to avoid many of Lopez’s power punches.

After that, we had Yosmani Abru (4-7-1, 0 KO) of Las Vegas, NV give Brady Rein (2-1, 2 KOs) of Riverside, CA his first professional loss, earning a unanimous decision in a four-round middleweight bout. Abru had a distinct edge in speed and boxing skill, while the power of Rein had always posed a threat throughout the fight.

In the next fight, Cesear Valenzuela outpointed a game but defensively lacking David Yanez (2-6-1, 0 KO) to win a unanimous decision over the course of six rounds. While Yanez won some points with his eager aggressiveness and landed some good shots, it seemed that Valenzuela won the judges over by landing the cleaner and harder punches.

In the co-main event, Yosi Ramirez put up a valiant effort against Sergio Lopez, both featherweights hailing from Las Vegas, NV, but it did not appear to be enough as the fight went to the scorecards in a six-rounder. Lopez did enough to get his first professional victory and deliver Ramirez his first professional loss.

Lastly, Antton Slaughter (4-1-1, 1 KO) of Columbus, OH edged in to get a majority decision over hometown favorite, Pedro Toledo (2-1-1, 0 KO), in a main event that garnered much enthusiasm from the audience as they chanted and cheered their hometown fighter on. As the fight went to the scorecards, it was Slaughter who received the nod from the judges.

In conclusion, Pochiro Promotions along with T Butler delivered an excellent card to the locals of Las Vegas and should be widely congratulated for giving the boxing fans in the community a chance to witness club fights as no other company is doing at this time. Boxing superstars, Zab Judah along with Chad Dawson, were among the hundreds in attendance to support this event. If you were unfortunate enough to miss the Hometown Throwdown, do not worry. Hometown Throwdown 2 will be coming in fall of this year. Tickets will be available for purchase at www.pochiroboxing.com.