Shakur Stevenson (17-0, 9 KOs) took WBO super featherweight champion Jamel ‘Semper Fi’ Herring (23-3,  11 KOs) to school in scoring a 10th round knockout on Saturday night to dethrone him in the main event at the State Farm Arena in Atlanta.

With Herring bleeding and taking a beating in the 10th, referee Mark Nelson stepped in and stopped the contest at 1:30. 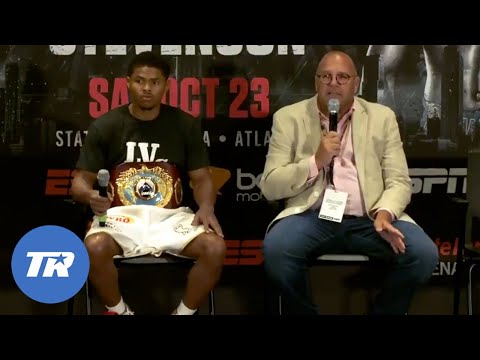 Herring looked older than his 35-years with the way he was dominated by the much younger 24-year-old Stevenson tonight.

It wasn’t just the age. Herring spent too much time attempting to box Stevenson from the outside rather than taking the fight to him. Also, Herring let Stevenson hold without fighting through the constant clinches.

Rising undefeated junior middleweight prospect Xander Zayas (11-0, 8 KOs) looked sharp in pummeling his overmatched opponent Dan Karpency (9-4-1, 4 KOs) with nonstop punches until his corner stopped the fight at the end of the fourth round in the chief support bout.

Middleweight prospect Nico Ali Walsh (2-0, 2 KOs) annihilated James Westley (1-1) by a third round stoppage. Walsh, the grandson of the late boxing superstar Muhammad Ali, knocked Westley down twice in the contest, once in the second and a final time in the third.

After the second knockdown, Westley’scorner threw in the towel.  The contest was officially halted at 2:30 of the third round. Walsh, 21, showed excellent right-hand power, and some slick moves. He’s got the talent to go far, but he still needs a little work.

Undefeated light middleweight Evan Holyfield (8-0, 6 KOs) smashed Charles  Stanford (6-4, 3 KOs) in taking him out in the second round. Evan is the son of boxing great Evander Holyfield.

This is obviously a big disappointment for Livsey and his promoters, as Palmer is a journeyman and he wasn’t supposed to win. It’s likely we’ll see a rematch between these two. 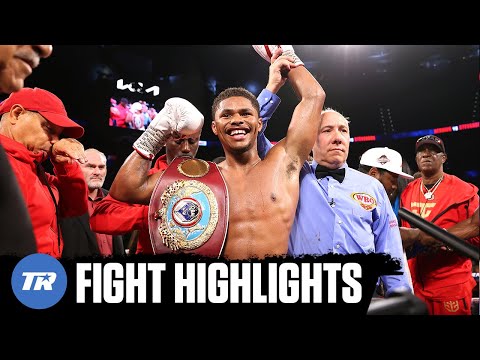 “I don’t respect anybody I got to fight,” said Shakur Stevenson to Max Kellerman. “It’s a lonely sport. We’re boxers, we’re fighters.

“I can’t go into the ring respecting another fighter because once you show respect, they feel they got an advantage over you, especially like with Jamel.

“Jamel is one of those dudes who goes in the ring and wants to touch gloves, be friendly and be nice. Get these guys he be fighting in the ring to respect him, and then he starts to take over a fight and beat them up. I won’t be one of those fighters.

“I’m not here to make friends. My life is on the line, his life is on the line. We got families to feed, and I take this very serious. I can’t go in there and touch gloves and be happy and be friendly with somebody I got to beat up,” said Shakur.

“I feel like it’s going to mean everything to me,” said Shakur Stevenson when asked what it’ll feel like from beating Herring tonight. “I got a daughter on the way in.

“When she comes into the world, I want her father to know that she just fought for another world title and became champion by beating the champion. that’s going to mean everything to me.

“It’ll mean everything in the world because it’ll mean that I got a win over another great fighter, and that’s all I can really say,” said Herring when asked what it’ll mean to him to retain his WBO title by beating Shakur tonight.

“It’s all about legacy. You always want to be remembered for those big fights snd those marquee names on your resume.  Shakur, even young in his career, is definitely a big name a big testament.

“Even afterward, I still feel win, lose or draw, he’ll still go on to do great things. That’s why I say, a win over him will mean a lot.

“That’ll push my name further into cracking the pound-for-pound list or being a fighter of the year.

“I want to say directly to you, congratulations with your daughter coming. That’s a blessing,” said Herring.

“I appreciate it, and I want to say to you, I’m sorry what happened with yours,”  said Shakur. “I didn’t even know nothing about that until.”

“That’s why I’m saying, congratulations. I lost my daughter but I’m happy for you and yours, man, and I believe you will be a great father,” said Herring. “You’re here now fighting for your daughter’s future and I respect that.”

“I appreciate that, but with all that friendly stuff now, I’m not with that,”  said Shakur in smiling. “That’s part of his game plan.”

“He thinks that’s part of my game plan. That’s just me,” said Herring.

“He be doing that to people,” said Stevenson in believing there’s an ulterior motive with the way Herring is playing it nice with him. “I’m not dumb. We’re not friends. You almost got me, Jamel.”

WBO super featherweight champion Jamel  ‘Semper Fi’ Herring defends tonight against Shakur Stevenson in what should be a thrilling fight on ESPN and ESPN+ at the State Farm Arena in Atlanta.

There’s been a lot of trash-talking between the two fighters this week, and it’ll be good to see them inside the ring squaring off.

The former WBO featherweight champion Stevenson (16-0, 8 KOs) has been trying to upset Herring (23-2, 11 KOs) this week by grabbing his WBO 130-lb title when the two of them have stood for face-offs. It made it entertaining.

1 thought on “Herring vs. Stevenson – live updates & results from Atlanta”