Herring (23-2, 11 KOs) has made three defenses of the title he won from Masayuki Ito in May 2019. Stevenson (16-0, 8 KOs), a 2016 Olympic silver medalist, is considered by many to be the heir to the pound-for-pound throne. He picked up the interim world title in June with a dominant decision over Jeremiah Nakathila.

When Herring and Stevenson had their final faceoff, the fighters and their teams exchanged verbal barbs, with Stevenson grabbing Herring’s belt on multiple occasions. They were separated and will resume the jawing at Friday’s weigh-in.

Read:  Haney comparing himself to Mayweather, says he had more wins at 23

Tickets are still available and can be purchased at Ticketmaster.com.

At Thursday’s final press conference, this is what the combatants had to say.

“The odds just play to my story. I’ve always been an underdog, not just in boxing but in life, so I don’t get into the oddsmaker thing. It doesn’t bother me at all.”

“It’s not personal, it’s just business. We’re building a fight is all it means to me. I’ve heard worse and been through worse. We’re just two top competitors in the division trying to prove who is the best.”

“It just feels like another elite level fight in a loaded and talented division, so we just take it one fight at a time. We put all personal feelings to the side and just go to work and do what we have to do.”

“Atlanta is cool. I have family out here. My sons live out here as well. It’s another home and it’s an honor just to be fighting in the State Farm Arena because there’s not a lot of fights coming into town, so whenever you can bring a special fight to a certain city, it’s always a great thing.”

“It means everything to me. This is my first time being able to go against a champion and being able to take a champion’s belt will mean a lot to me…. and I can’t wait to hear them say, “AND THE NEW!'”

“It’s definitely not personal, just business at the end of the day. He’s not my friend. I don’t hit him up and say, ‘let’s fight.'” We don’t have any conversations. I don’t talk to Jamel Herring outside of boxing.”

“It’s going to feel real good beating the whole team. I can’t wait to go against {Herring trainers Brian McIntyre and Red Spikes}. It’s not just Jamel that I’m fighting. I’ve got to beat Bomac and Red, and it’ll feel good doing that.”

“You’re going to see a special night, my coming out party. It’s going to be a great night, and he said he’s going to spoil the party, so let’s see if he can do it.”

“I’m grateful to be here. It’s just an amazing experience to be 19 years old making my ESPN debut. I’m ready to go, and on Saturday night, I’m going to show it. I like to have fun and keep it simple and smile for the camera.”

“I have a lot to learn from my last fight, but my team has made the proper adjustments and on Saturday night I’ll show that I can adjust to a lot of stuff. The main event is a great dance. You have two great boxers going toe to toe and I just wish that the best man wins.”

“All of the greats say that the first fight is always the hardest. The first is out of the way, so it’s all fun from here on out. I love boxing, it’s my passion, and I’m looking forward to continuing my grandfather’s legacy and creating my own. After the first fight, you get used to it. I have the greatest people in my corner. I have SugarHill Steward and BB Hudson, so I’m very happy with the corner that I have, and if I could build anything off of my pro debut, it would be more off a jab and a cleaner right hand.”

“It means absolutely everything to fight in my hometown. This is my second time fighting in Atlanta. It’s boxing, hit and don’t get hit, and I’m going to do whatever it takes to win whether I fight or box. My dad always tells me to train at my hardest. I’ve been real focused this training camp, and I’m just ready to go to work. It’s definitely like a kid in a candy store just being around all of this talent. It’s an honor. We got Xander Zayas, Shakur Stevenson, Jamel Herring, and Nico Ali. It’s nothing but greatness.” 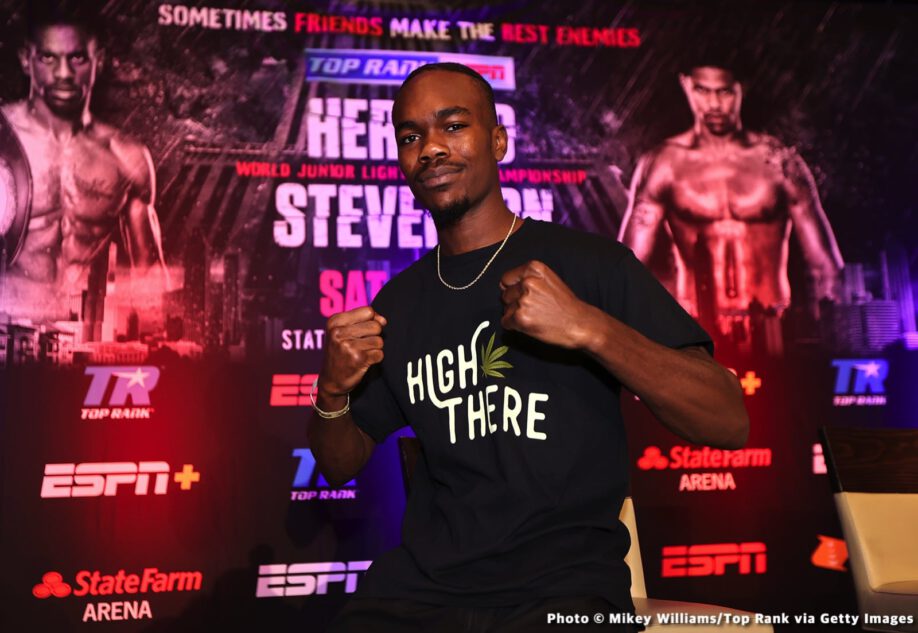 ATLANTA, GEORGIA – OCTOBER 21: Evan Holyfield poses after the press conference with Charles Stanford prior to their fight at Omni Atlanta Hotel at CNN Center on October 21, 2021 in Atlanta, Georgia.(Photo by Mikey Williams/Top Rank Inc via Getty Images) 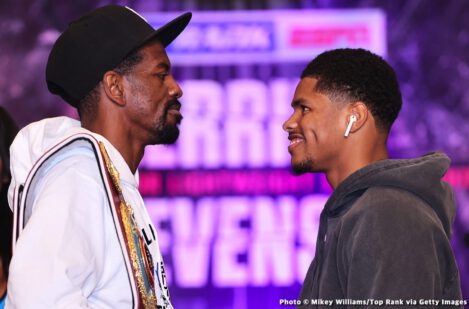 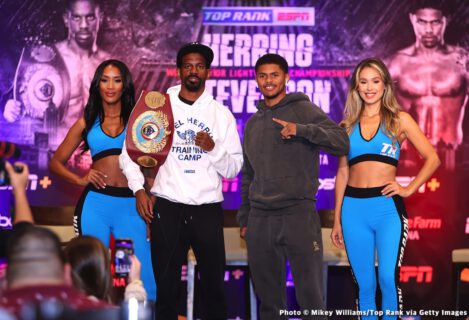 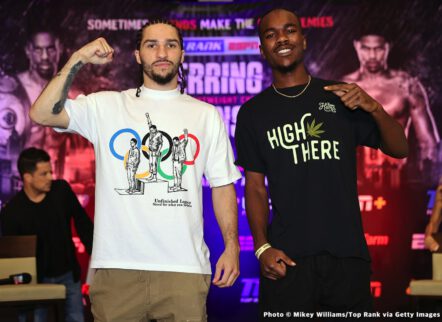 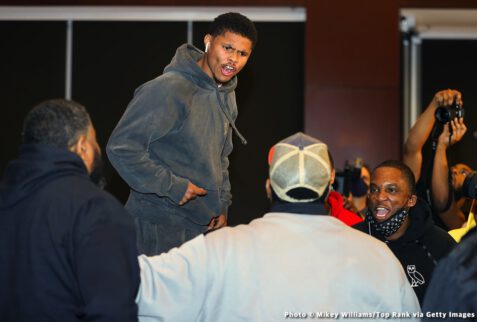 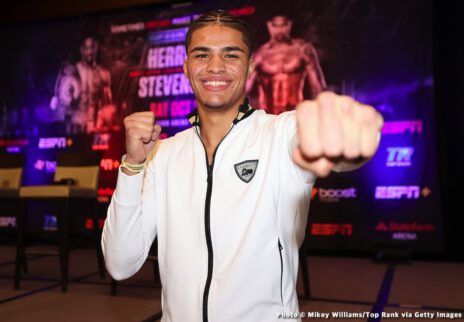