Like the rest of us, Eddie Hearn has had something to say about Oleksandr Usyk’s apparent weight gain, about the added muscle he has packed onto his frame (reports suggesting Usyk has added over 30 pounds). But Hearn, promoter of course of Anthony Joshua as well as Usyk, says the extra weight/muscle will not benefit Usyk – it will instead benefit Joshua. Speaking with Boxing Social, Hearn said he expects a “big, aggressive” Usyk to “get knocked out” by Joshua next Saturday in Saudi Arabia.

Hearn has predicted the rematch will “not go past six rounds.”

“He looks really big,” Hearn said of Usyk. “I expect him to try and walk AJ down. I think this fight will be over in six rounds. I think it’s going to be a war. I don’t think Usyk wants to be walked down by AJ, to box off the back foot against an aggressive Anthony Joshua. I expect him to be aggressive, and I think he’s going to get knocked out.”

If Hearn is correct and both Usyk and Joshua are aggressive fighters on the night, with them both coming together to have a war, it will be we fans who benefit. The added weight and muscle and how it may affect Usyk has arguably become the biggest talking point regarding the return fight. It will indeed be fascinating to see how Usyk carries the additional pounds, and if he does change tactics in the sequel.

We know Usyk can box, and he can do it whilst coming forward. But is Usyk looking for the KO this time, whereas his plan was to work and pile up the points in the original fight of last September? Friday’s weigh-in will be interesting to see, to see just how much both men come in at. Tactics will of course be kept under wraps, yet Hearn seems convinced it will be a battle of aggressive-minded punchers next Saturday

If this is how the fight plays out, who wins? Who has the better chin out of these two? I feel most fans will say Usyk has the stronger chin, simply because he has never really been stunned in a fight, much less stopped. But Usyk has had just three fights at heavyweight. The hype has bubbled up quite slowly for Usyk-Joshua II, but right now, this fight is a truly fascinating one.

Can YOU pick a winner? 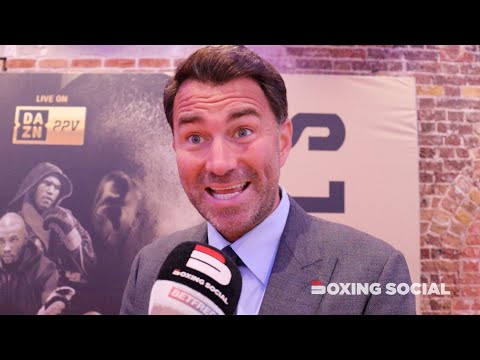