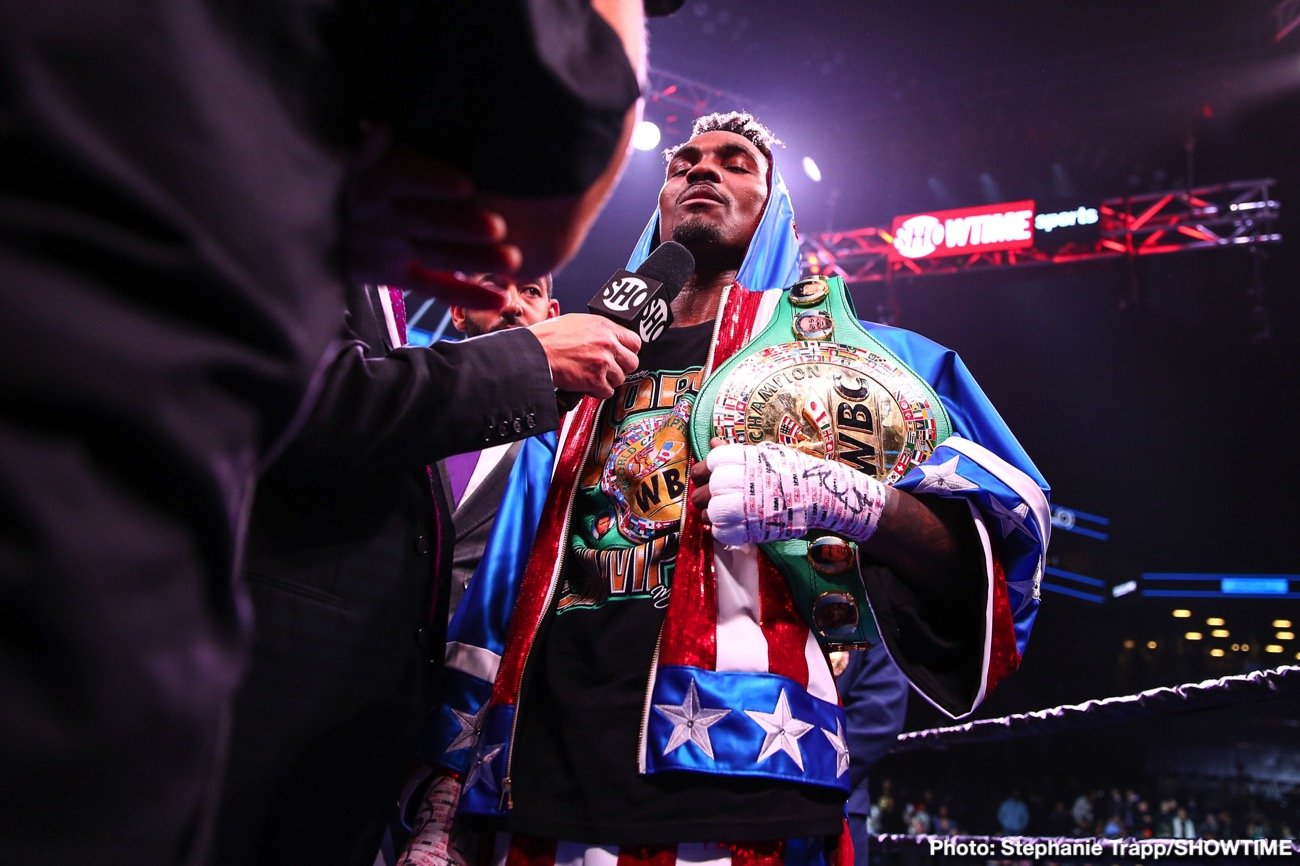 Hearn has offered Charlo a “MASSIVE” one-fight deal with DAZN, which he’s hoping he agrees to. Charlo can take that fight with Andrade on DAZN, and then return back to fighting on SHOWTIME.

If Charlo agrees to the deal, he could put himself in position to get a future fight with Canelo Alvarez if he beats Andrade, and opts to stay with DAZN. Ultimately, Charlo could make good money if he stays with DAZN beyond the one-fight deal, because a match against Canelo would be huge money. Moreover, Charlo would be fighting on the same platform as IBF middleweight champion Gennadiy Golovkin if he signs with Hearn.

Hearn states that the unbeaten Andrade (28-0, 17 KOs) needs a big breakout fight to turn him into a star so that he can get  the big name fighters like Canelo Alvarez and Gennadiy Golovkin to fight him.

At the present time, none of the popular fighters want to mix it up with the crafty southpaw Andrade, as he’s got an awkward style, and he’s big, fast and can punch. That’s where the unbeaten Charlo (30-0, 22 KOs) comes in.

“That’s the perfect fight for both guys,” said Hearn to SI Boxing with Chris Mannix about a fight between Jermall Charlo and Demetrius Andrade. “Charlo’s not rating on Showtime. I wills say about Andrade, people don’t presume that he sells tickets, and he doesn’t drive numbers. I have to say that he’s not a subscription driver, but the viewership numbers for Demetrius are quite strong.

“We sold nearly 8,000 in Providence [Rhode Island], it was a good gate, and it was a great atmosphere,” said Hearn on Andrade. “I believe he can be that standout, but he needs a big fight. He’s fighting Luke Keeler, who I know really well. He’s from Ireland, and he’s #2 with the WBO. I’ll be a decent fight [for Andrade], but he needs the breakout fight.

“Unfortunately, it’s all very well saying he needs the breakout fight, but no one wants to fight him,” Hearn said. “The only way you’re going to get someone to fight Demetrius is a lesser name, that wants to fight for a world title or you have to significantly overpay someone. We’ve now made an offer Jermall Charlo, a huge offer, and a one-fight deal to fight Demetrius Andrade in May on DAZN,” said Hearn.

Eddie should have known when he signed Andrade how difficult it would be for him to get fights for him. With the 31-year-old Andrade being avoided by other fighters, Hearn is forced to make big offers for other fighters, and overpay them in order to get them to fight Demetrius. Even one of Hearn’s own fighters Billy Joe Saunders chose to vacate his WBO 160-lb title rather than defend it against Andrade when he was his mandatory.

“I can’t do anything more, and if they [Premier Boxing Champions] want to replicate the offer, I’ll send Demetrius over to the PBC to fight Charlo,” said Hearn. “And if Charlo beats Andrade, he can go back to PBC or he can stay on DAZN and fight Canelo. It’s a nice spot to be in. This is what happens. They [PBC fighters like Charlo] get the offer, and say, ‘Wow, I’m going to speak to Al [Haymon].’

“They speak to Al, and he says, ‘No, we got plans for you, and you stay right where you are.’ They go, ‘Alright now.’ That’s what happens. It is the plan,” said Hearn when asked if PBC’s big plans for Jermall Charlo is to match him against Chris Eubank Jr. “But that’s a big problem Demetrius has got,” said Hearn.

Eddie has a case of wishful thinking in him saying that Charlo could possibly face Canelo Alvarez if he chooses to stay on with DAZN beyond the one-fight contract he’s offered to him. Look at Andrade and GGG, they’re both with DAZN, and Canelo isn’t giving either of them the time of day.

While it’s true that Canelo is expected to fight Saunders or Callum Smith next, you can argue that the only reason they’re being considered by him is how poor they both looked in their last fights. Jermall is a different story. He’s looking good, powerful and big. Subsequently, Canelo will likely never agree to fight Charlo, even if he winds up signing with DAZN.

Callum, Jacobs and Saunders may need to fight each other

“I feel like the whole Callum Smith, Billy Joe Saunders and Daniel Jacobs, they kind of have to fight each other if they can’t get Canelo or Golovkin or Charlo,” said Hearn. “That’s why you have to roll your dice on that fight, because the winner of that fight is probably the strongest person in the middleweight division outside of Canelo.

“I will say on the Demetrius side now, he’s made some nice money, and this is his fourth defense with us. He actually wants to see how good he is, and he wants to test himself against the best,” said Hearn.

It’s academic at this point that WBA super middleweight champion Callum Smith (27-0, 19 KOs), former IBF/WBA 160-lb champion Daniel Jacobs and Saunders will need to fight each other. Canelo isn’t going to fight all of them, so that means that they’re going to need to face each other if they want some nice paydays.

Saunders and Callum won’t get big money making simple title defenses for their super middleweight titles. Moreover, they’ll eventually lose to one of their contenders sooner or later.

Callum was almost beaten in his last fight by his WBA mandatory John Ryder (28-5, 16 KOs) on November 23 in Liverpool, England. Ryder fought well enough to win that fight. Saunders almost lost his last fight in defending what was supposed to be a safe fight against fringe contender Marcelo Esteban Coceres on November 9.