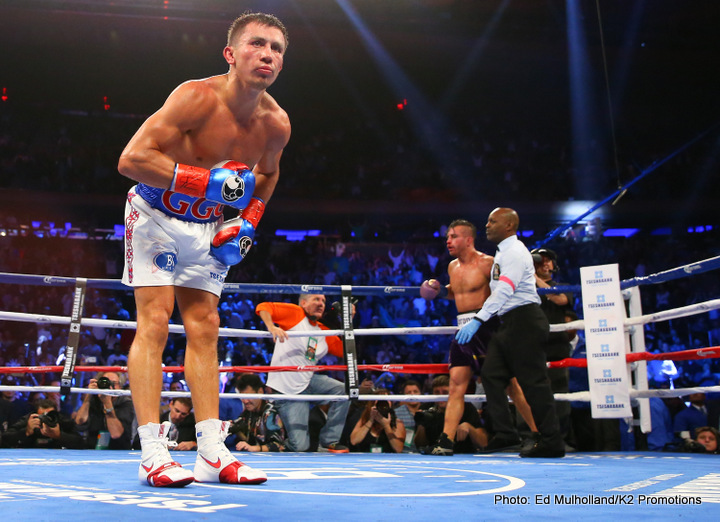 A packed house at Madison Square Garden, New York, NY watched two of the best P4P fighters in the world demonstrate their greatness. Both fighters faced what many thought would be their biggest challenges to date. Roman “Chocolatito” Gonzalez 44-0-0 (38KO) seems to slice and dice his opponents. His punches are so accurate and sharp. His attack is relentless.

The way he cuts off the ring is a thing of beauty. He is like a mongoose darting this way and that way, in and out, leaving bite marks every time the distance allows. There is no let up and soon the prey (Viloria) starts “numbing up”. His legs start failing him. His reflexes slow, and leave him in harms way. He tries to step away and get a breath, but it’s as though his pursuer is attached to him.

He just can’t shake him, and his confidence and will to win quickly dissipate. He becomes a hollow shell of the fighter he was just minutes ago. Referee Benjy Esteves, Jr. had witnessed enough of the beat down. By the 9th round, he felt the damaging effect of the cumulative blows was enough. His first responsibility is the safety of the fighters, so he stepped in to stop the action.

Brian Viloria’s 36-4-0 (22KO) Hawaiin Punch was gone. He no longer had a chance for victory. Esteves apparently felt it made no sense to allow Viloria to take more punishment. Regardless, fans got what they came to see, a great fighter(s). Gonzalez is a little big man who moves, punches and defends with beauty, power and grace. His nickname might be a misnomer. Chocolatito conjures up an image of a sweet melt in your mouth treat. This little WBC World Flyweight titlist from Guatamala is more like “hard candy”.

Gennady “GGG” Golovkin 34-0-0 (KO31) handled his so called “biggest threat to date” with relative ease. David Lemieux 34-3-0 (31KO) fought valiantly, but just couldn’t crack Golovkin’s defense to land one of his power shots, at least not often enough to slow down Triple G’s attack. HBO analyst Max Kellerman was so impressed with GGG’s jab that he said that the man from Kazakhstan could win the fight with his jab alone. He’s probably right, but unfortunately for Lemieux, Golovkin was also throwing and landing big hooks, uppercuts, and straight right hands.

As a sidelight, Lemieux’s weird haircut soon became a problem. The haircut is apparently stylish, but it really looks like someone slapped a cheap rug (toupee) on a bald head. With the force of the blows, the long strands got snapped around like cat-o-nine tails. Lemieux kept trying to brush them aside. They definitely were a distraction. Golovkin, like Gonzalez, moved wonderfully. The movement is done with such ease and grace.

Neither he or Gonzalez is ever out of position, or off balance, which enables them, at any time, to punch or avoid a punch. They both are masters of controlling distance. With hardly a change in their position, they make their opponents miss, and in exchange they fire off punishing counters. One of the best example for Gonzalez occurred in the third round when he fired off a short counter right to Viloria’s jaw. The powerful blow dropped Viloria for the first time in his career.

Golovkin also pulled off a classic move when, in the fifth round, he avoided Lemieux’s right by slipping a little bit to his left. That move allowed him to shoot a powerful left hook to the liver sending Lemieux to his knees. It was a testament to Lemieux’s courage, he beat the count and survived the round. There was no let up though , and a similar punch was landed in round eight, followed by several other blows.

Referee Steve Willis had seen enough. He stepped in and rescued Lemieux from further punishment. The Canadian felt it was an early stoppage, but no surprise there. He might have been correct, but if allowed to continue, how much longer would he be around and at what cost? In the post fight interview with Max, Lemieux promised to return stronger and be ready for Golovkin in a rematch.

It might be hard for him to catch Gennady, who proved he is a legitimate PPV draw. Fans are already demanding the winner of the Canelo vs Coto fight meet him to unify the middleweight division. That’s been GGG’s goal for some time. He now has the IBF, IBO, interim WBC and WBA titles. He wants Cotto’s WBC title too, before entertaining any thought of moving up or down in weight.

In the meantime, fans can look back with satisfaction that they just saw two of the best P4P fighters in the world. Both are thrilling, aggressive, and explosive “fighters”. They are not trash talkers or cocky. They are not brawlers. They are technicians, operating in the squared circle with power and precision, guided by strategy and tactical generalship. As a result, they serve as exemplar models of the sweet science.