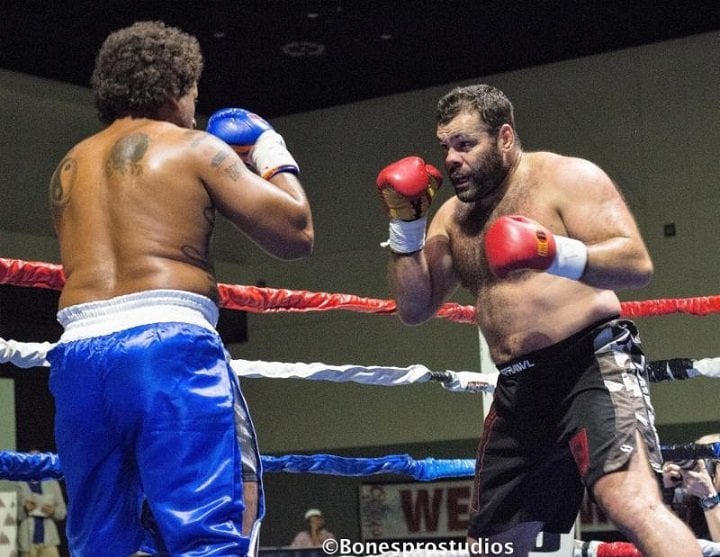 Gabriel “Napao” Gonzaga (1-0), a former UFC heavyweight title challenger made a successful professional boxing debut as he defeated Alejandro Esquilin Santiago (0-1) over four competitive, back-and-forth rounds with two scorecards (58-56) and one scorecard (38-38), for a majority decision victory. Both fighters had their moments in this entertaining heavyweight bout, especially in the third-round; however, Gonzaga landed the more powerful punches and was the aggressor throughout the fight.

“I did my best and came away with a victory. I was too safe in the third-round. My punches were much stronger and a lot of his punches I blocked with my gloves,” said Gonzaga. “This was a really great night.”

Unbeaten light heavyweight Richard “Popeye The Sailor Man” Rivera (no relation to the promoters) scored a devastating first-round technical knockout win over Hasen Castillo with two quick knockdowns from a left uppercut and left hook, respectively. Referee Kevin Hope did not bother to count as he halted the action after the second knockdown at 2:18 since Castillo was in no shape to continue. Rivera improved his record to 4-0, 3 KOs. Castillo dropped to 0-3.

“My coaches told me to be calm because this was a six-round bout,” said Rivera. “I saw that he had his left hand down and I caught him with an uppercut. I am strong to the finish because I eat my spinach.”

Edwin Soto upped his record to 11-2-2, 4 KOs as he defeated Anthony “The Animal” Everett via a six-round unanimous decision with two scorecards (58-56) and one scorecard (60-54) in this light middleweight matchup. He won his second consecutive bout after a two and half year layoff. Everett fell to 1-7. Soto dominated this bout as he punished Everett throughout their fight and connected on almost everything he threw despite being outweighed by fifteen-pounds. Everett did not land much of anything and was more focused on trying to defend himself.

Omar Bordoy, Jr. controlled this one-sided junior welterweight bout against Bryan “The Brick” Abraham for third rounds and then he landed a powerful right hook in the fourth that knockdown Abraham, who was slow to get up. This caused referee Paul Casey to stop the fight at 1:48. Bordoy, Jr. laid a beat down on Abraham who had no answers to stopping Bordoy, Jr.’s offensive onslaught. He also scored a knockdown in the third-round from a right jab, although it appeared it was a slip. Bordoy, Jr. improved his unbeaten record to 3-0, 1 KO, with the technical knockout victory. Abraham dropped to 6-27-2, 6 KOs.

Undefeated super middleweight Elvis “Chi Chi” Figueroa, a three-time USA Boxing Nationals Champion upped his record to 3-0, 1 KO with a four-round unanimous decision over Nazare, who fell to 0-1, in his professional debut. Figueroa dominated Rene Nazare throughout their super middleweight bout en route to three scorecards (40-36). Figueroa landed whatever he wanted on a defenseless Nazare, who did not offer much of any offensive return.

Wilfredo “El Sucaro” Pagan made easy work of Patrick Leal as he scored three quick knockdowns in the first-round of their welterweight bout, after which referee Casey stopped the bout at 1:36. Pagon improved his undefeated record to 3-0, 1 KO with the technical knockout victory. Leal dropped to 0-4.