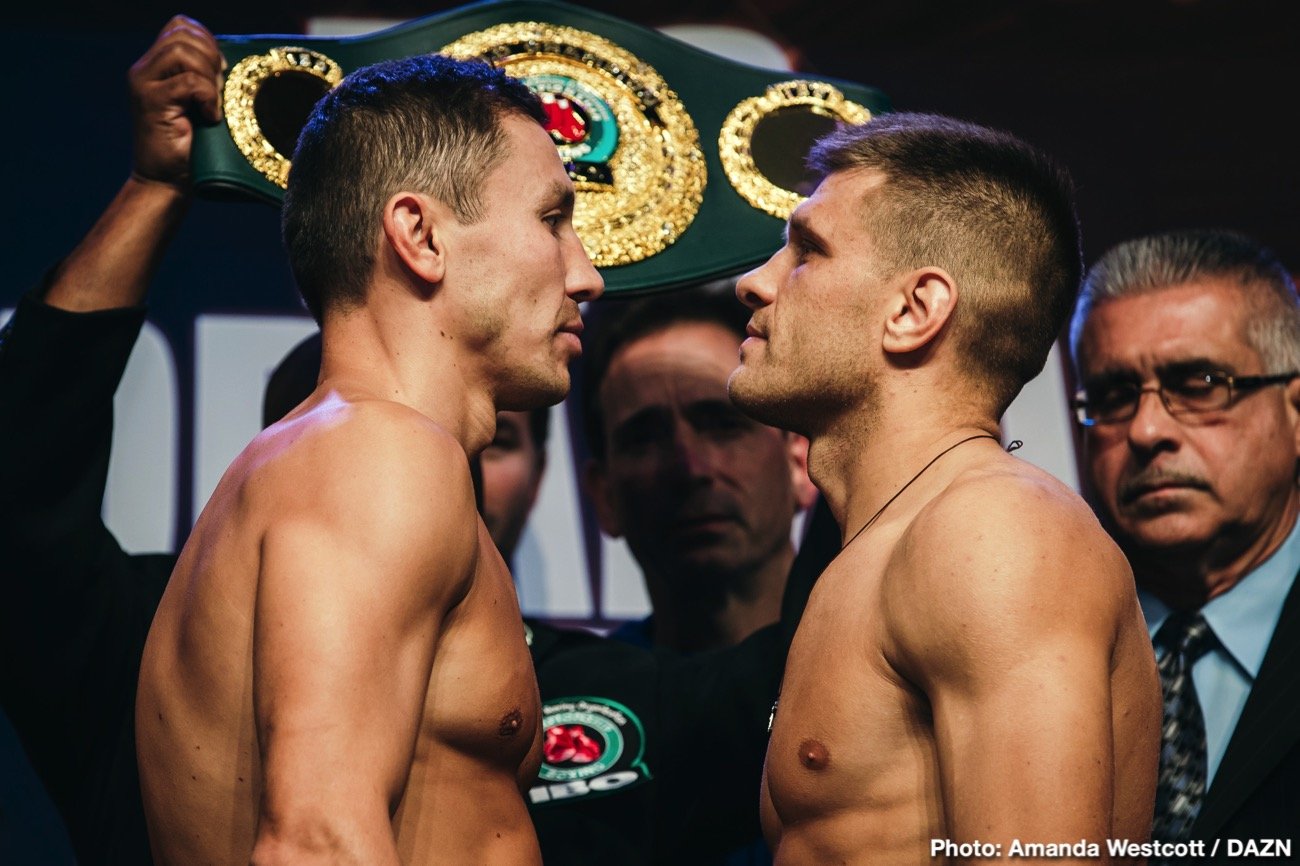 Former middleweight champion Gennady ‘GGG’ Golovkin (39-1-1, 35 KOs) is promising to give the fans a “big drama” show this Saturday night against Sergiy Derevyanchenko (13-1, 10 KOs) at Madison Square Garden in New York. Golovkin wants to make the fight a war, whereas Derevyanchenko has other ideas. He wants to move, box, and “not get hit.”

GGG looking for a new start against Derevyanchenko

Golovkin, now 37, is fighting for the vacant International Boxing Federation middleweight title against Derevyanchenko. GGG is hoping to start a new world title reign. He may be a little too old to make that happen at this point.

This is a new start for GGG with trainer Jonathon Banks. He thinks he steer Golovkin to the Fountain of Youth. If Banks is right, he’ll be looked at as a genius, and will likely have a storm of top boxers wanting to be trained by him.

Golovkin lost last year to Saul Canelo Alvarez, and he didn’t look good in defeating his last opponent Steve Rolls in June. That was supposed to be a gimme for GGG, but it turned out to be a struggle for him to win. Golovkin looked slow, hittable, and his timing wasn’t there. This wasn’t the same Golovkin that destroyed Matthew Macklin over 2,000+ yesterday’s ago in 2013.

“I’m absolutely excited. Please, guys, support my opponent. He’s very strong guy,” said Golovkin in giving his final words during Friday’s weigh-in. “This is really big test for us. Thank you, God, for giving us this chance.

“Of course, this is big present, big gift to boxing fans. This is a great time for us, and for everybody. This is new experience. Right now I feel like a fighter, a boxer. I’m ready. I want big drama show,” said Golovkin.

There are no guarantees that Golovkin wins this fight. He’s fighting a very good fighter in Derevyanchenko, and he arguably should be unbeaten. Derevyanchenko’s only career defeat was a controversial 12 round split decision to Daniel Jacobs last October. The fast pace style that Derevyanchenko fought Jacobs would likely cause the slow-paced GGG to boil over, and left on the side of the road. Golovkin likely won’t be able to keep up with Derevyanchenko if he forces him to battle for a full 3 minutes of every round.

Derevyanchenko is going to take the fight to Golovkin this weekend, because he knows he’s not going to be given a decision unless he outworks him. Besides that, this maybe Derevyanchenko’s last chance. If he doesn’t beat Golovkin, he may not get another chance. Derevyanchenko has to make the most of this opportunity, and not let the chance go out the window.