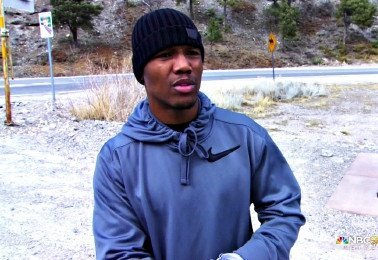 LOS ANGELES, August 19 – One of the premier boxers of this era, Zab “Super” Judah has won five world titles in two weight divisions, but he still has plenty of goals left, including winning another championship and continuing to give fans more exciting fights. So it is with great pleasure that Golden Boy Promotions is announcing a joint venture with Super Judah Promotions to co-promote Judah and make sure the world continues to see this boxing superstar on the sport’s biggest stages.

“Super Judah Promotions and Golden Boy Promotions working together is phenomenal,” said Judah. “I have been doing business with Golden Boy Promotions for a number of years, working both with them and against them and I know what it’s like to be on both sides. Through those times, I see that we are a perfect fit. This joint venture will give me the experience I need as a promoter and get me the big fights I want at this point of my career.”

“I am very happy to welcome Zab to the Golden Boy team,” said Richard Schaefer, CEO of Golden Boy Promotions. “He is without question not only one of the most exciting fighters in boxing, but he also has tremendous name recognition with reaches into the general market. In his thrilling fight against Danny Garcia, Zab showed that he belongs in the absolute top level of the sport. I am looking forward to be working with Zab and his team and have him participate in the biggest fights in the junior welterweight and welterweight divisions.”

Offered Bill Halkias, Vice President of Super Judah Promotions, “Zab Judah and Super Judah Promotions are looking forward to working with boxing’s premier promoter in Golden Boy Promotions. We understand the importance of partnering with the best promoter in the business. It’s the difference between having Zab in good fights and having Zab in great fights. Zab only wants to fight the best and Golden Boy Promotions stable of fighters is the best in boxing. ”

A New York boxing icon who was a five-time world champion with titles in the junior welterweight and welterweight divisions, Brooklyn’s Zab “Super” Judah (42-8, 29 KO’s) showed in his recent challenge for Danny Garcia’s 140-pound titles that he’s still a major player at both 140 and 147 pounds. A veteran of nearly 17 years in the pro game, Judah owns wins over Micky Ward, Junior Witter, DeMarcus Corley, Cory Spinks, and Lucas Matthysse, while also battling the likes of Floyd Mayweather, Amir Khan, Kostya Tszyu, and Miguel Cotto. Winner of six of his last eight bouts, the dazzling boxer-puncher continues to provide thrills for fight fans around the world, and if his recent form is any indication, the best may be yet to come.

Zab Judah’s next bout will be announced shortly.