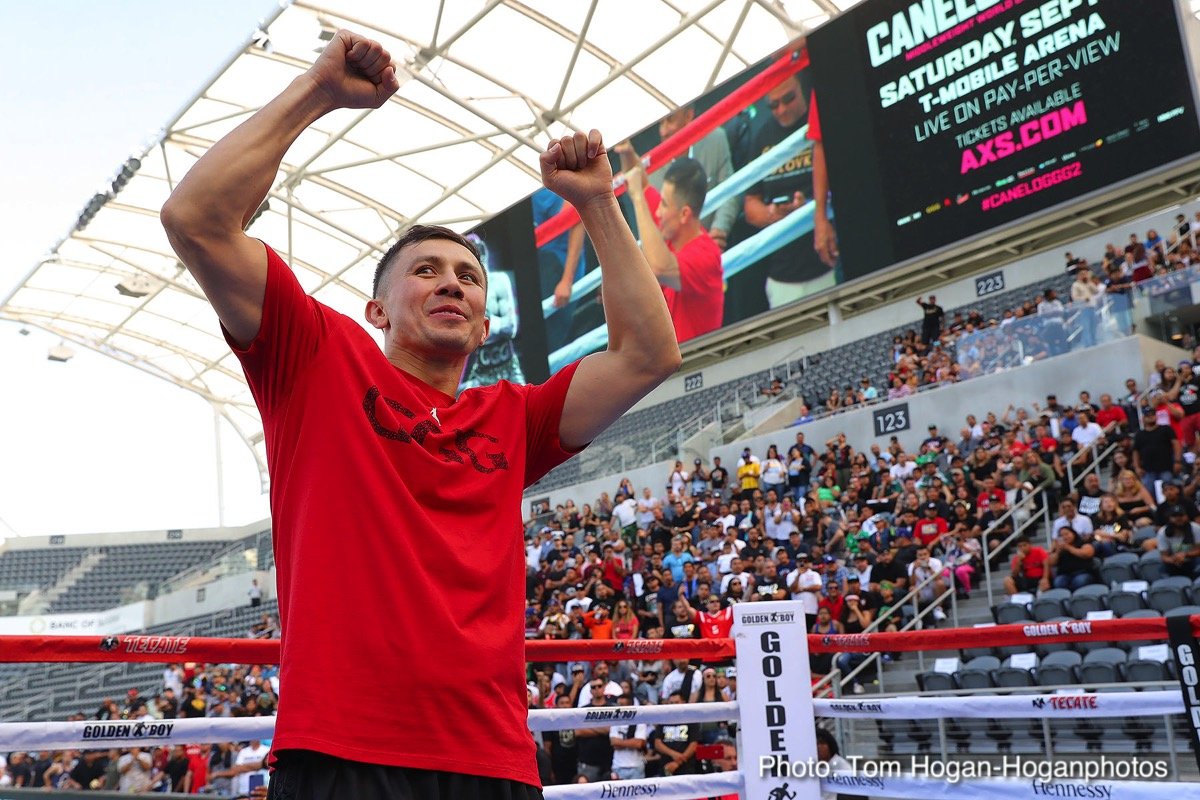 What did you learn about yourself and Canelo in the first fight? Is that going to help you in the rematch?

“So many people show me their true face during and after the first fight with Canelo. I am talking about lots of different people. I know who I am and I know who Canelo is, and what he has become. I know what kind of people I am dealing with in this rematch, what everyone is about. I do not think about the first fight anymore. I did not lose that fight. I walked out of the ring with all my belts, still the world champion. The second fight is much bigger and more interesting. The last fight was a good experience because it was a learning experience. Now it is a different situation. I understand the situation. I now know that boxing is not just a sport. It is a business. That is one thing I learned from the first fight. So from that I learned how to deal with this rematch. I learned how to deal with Canelo and his promoter. Now we have new judges and a new referee. The world will see a new fight and different sides of that fight.

“I have worked very hard in this training camp, building myself up. It has been very exciting because I have been working on new things with Abel. Every day has been a good day. I am very happy and very strong. This will be the biggest fight for boxing. I cannot wait to give the fans a great fight, an exciting fight, a Mexican Style fight. This is a battle between the two best middleweights. To me, it is a fight about honor. This time I am fighting for a lot more than my world championship belts.

GGG: “There was nothing special about Canelo in the first fight”

How frustrating was it to hear the judges’ scorecards after your fight with Canelo? Did you use that as an incentive for this training camp for the rematch?

“It is a new situation for me. This is my first rematch. I’m very excited because this fight is a completely different situation for us and for the fans. They get to see a fight with a real champion, two pound for pound champions. It is new. This is the biggest fight for boxing. I’m very happy because I am fighting at the highest level, the first class for boxing.

“Training camp with Abel Sanchez is always hard and exciting because Abel works me hard and he is always teaching me new things. What I have to prove I only have to prove to myself and no one else. My incentive is my desire to be my best when I fight and to be better than I have ever been before. Canelo is my most important fight because he is my next fight. That is the only thing that makes Canelo special. There was nothing special about him in the first fight. He did not fight Mexican Style like he promised. Over the last twelve months, Canelo has showed everyone his true self.”

When the rematch first fell through, you were determined to fight on May 5 anyway. Why was it so important for you to do that?

“When it became clear Canelo would not be allowed to fight on May 5 because of his failed drug tests, my priority was to keep my fight on Cinco De Mayo. Cinco De Mayo is a huge date for boxing. It is a boxing holiday. I did not want to let the fans down. I also wanted to stay active. And I like headlining boxing events on Mexican holidays. It brings out the best fans and the best in me.

“I was told that Canelo and his promoter did not want me to fight on Cinco De Mayo and that it could keep the rematch from happening. A lot of people tried to stop me from making a fight on Cinco De Mayo. I did not care about what they wanted. Keeping that fight on Cinco De Mayo was important to me, to the fans, and to the sport of boxing. This was going to be my decision. Boxing fans look forward to Cinco De Mayo. Sponsors like Tecate put a lot of time and energy into making it a special holiday weekend. My promoter Tom Loeffler worked very hard to make this happen. My fight with Vanes Martirosyan at StubHub Center was a great night for boxing and a big hit for HBO.

“No one is bigger than the sport. Boxing is about working hard and giving a fair and honest fight. I respect the sport of boxing and the fans around the world who support it. For me, it is always about giving fans an entertaining fight. That is why I fight Mexican Style which was taught to me by Abel Sanchez. When I was an amateur I dreamed of becoming a world champion. I have worked hard to make that dream come true and I am not ready to give that dream up. That is why it was important to fight on Cinco De Mayo. I like being a world champion. I like defending my titles. And that is why I am working hard to stay world champion on September 15 and beyond.”

Did you ever worry that this rematch might not happen? How close were you to moving on to another opponent?

“Of course I wanted the rematch to happen but it was never a worry for me if it did or did not happen. That is because after Canelo failed two random drug tests in February everything changed. After I beat Vanes Martirosyan on May 5, I authorized my promoter Tom Loeffler to begin a new negotiation for the rematch with Canelo. Canelo and Golden Boy Promotions assumed I would fight under the terms of the May 5 rematch and they were unhappy when I gave them my terms. What they refused to admit was that it was their side that changed everything once Canelo failed his drug tests. That was their fault not mine.

“My team and I treat everyone we do business with on a professional level. Whether we agree or disagree we show respect. But Golden Boy decided that they would share my proposal with the media and insult me — every day. I guess they thought the media, the event partners, and the fans would agree with them and put pressure on me to accept their terms. It did not make a difference to me. It did not make a difference to the fans, they just wanted to see the fight. I knew what I wanted. I knew what was fair. So it was easy to deal with Golden Boy. I did not care what others thought. I am the champion. Canelo was the challenger. If they wanted the rematch, this time it would be on my terms.

“How close was I to moving on to another opponent? I actually had. Golden Boy gave me a deadline to accept their latest “final offer.” They were very public about that too. I had a deal in place to fight WBO champion Billy Joe Saunders in August and I was planning to start my training camp in Big Bear. Tom told the Saunders team that if Canelo agreed to my terms we would take that fight first. We were honest with them. That is how we deal with people. One hour after the deadline for Golden Boy’s “final offer” passed, Tom received a call from them saying they would meet my terms and the deal was done.”

Canelo vs. GGG 2 takes place Saturday, Sept. 15 at T-Mobile Arena in Las Vegas and will be produced and distributed live by HBO Pay-Per-View beginning at a special time of 8:00 p.m. ET/5:00 p.m. PT.