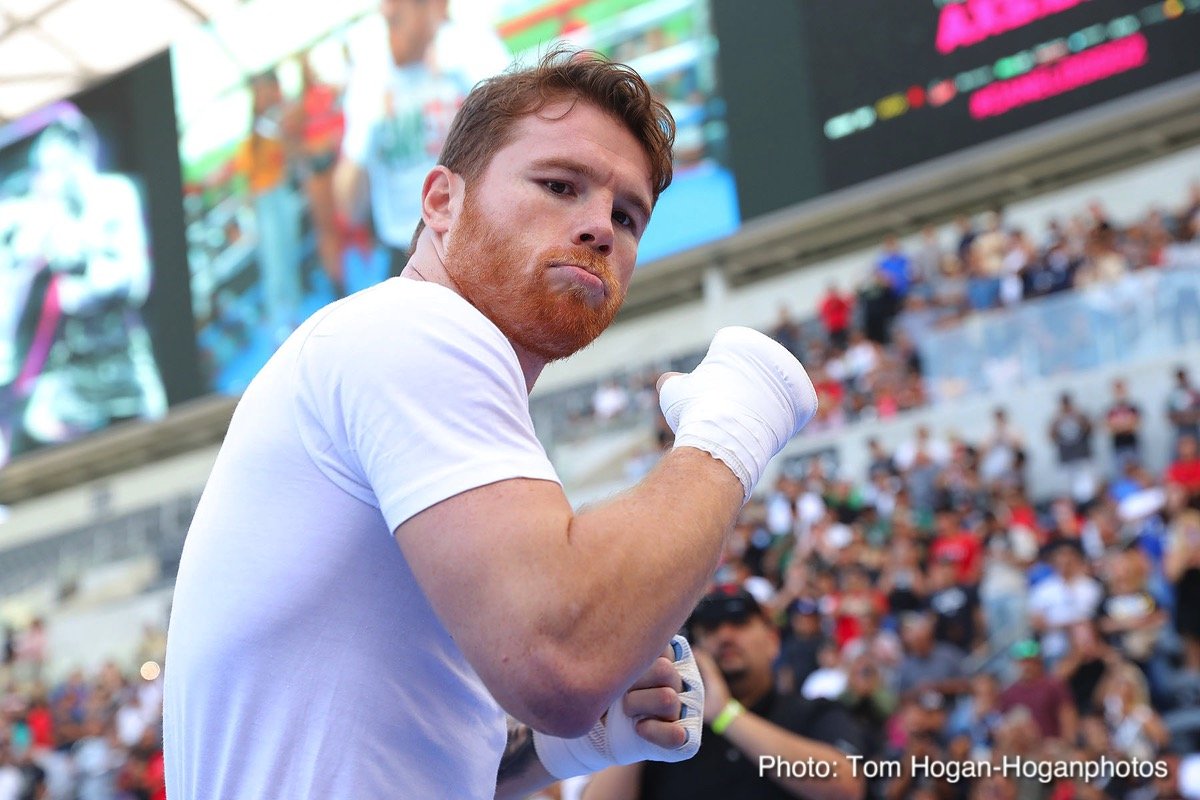 How important is this fight for your legacy?

“My objectives in the sport of boxing is to take advantage of my opportunities and to make history. I’m going to keep making the best fights. A career in boxing is short, and I want to do it well. I’m going to do my best and take advantage 100% in this sport to leave a great legacy, which is what I hope for.

“It’s definitely more personal now. I really don’t like him [Golovkin]. It’s personal, and I take it that way. It will make me train harder and give it the extra push to knock him out on September 15.

Canelo: “It is I who has made them [Team GGG] gain so much [money]”

It seems you genuinely don’t like Golovkin. Have you ever felt that way about an opponent before? And are those personal feelings a motivator, or something you need to put aside?

“You will see an aggressive Canelo Alvarez in this fight. This fight has become personal. I will use this in my favor—obviously with intelligence—for this battle. The cordiality that we had, not in the ring but outside of it, has ended because of many things. Because of the many times they opened their mouth. Everyone knows that I don’t like to talk a lot. It’s one of those times where—well, I have my way of being. I get mad. But I know how to control myself, though the cordiality between us has ended.

“I don’t know why Golovkin’s corner or team have been aggressive in their talks. It may be because of their rivalry. I don’t know. I think they’ve gone too far. They’ve gone beyond just trying to sell the fight with their statements. I don’t like talking or instigating with the fighter or even trying to make a show to sell the fight. People know that when we get into the ring, we’re going to give a great fight, period. In some sense, he might have offended me. But I always consider who’s saying what. The truth is that Golovkin is my opponent, so I understand it. With Abel Sanchez, it doesn’t worry me at all. Because at the end of the day, what about him? At the end of the day, he’s not going to get in the ring with me.”

Canelo: “Abel Sanchez is a dumbass”

Abel Sanchez keeps saying that you “ran” during your first fight with Golovkin – Golovkin says you should stand and fight him in the center of the ring. What’s your response?

“It’s one thing to be coming forward like a donkey and it’s another thing to be moving, dodging punches, counterpunching, and even staying on the ropes without him hitting you. I hope he goes back to his house and realizes what I’ve been saying about him: that he’s a dumbass [pendejo]. The first have has given me the confidence that I will win this fight. If I work him well throughout the fight, I can knock him out.”

What have the last few months been like for you? How do you feel about the criticism you have received from some other fighters? How have your fans responded?

“I’ve already spoke about what has happened. I want to turn the page on this and focus on this big fight on Sept. 15. I want to move forward. The people know. I gave the explanation I needed to give at the moment I needed to give it. I’m 100% focused on this upcoming fight and nothing more.

On the year that has passed:

“I always stay in shape. This has all served as experience, and I keep training, which is important. Thankfully, my body has been very good to me and has always been able to adapt quickly to everything. [During the time off] I dedicated myself to do other things. I needed to fix some things that I had pending. After being in the sport for 13 years, it also gave me some much-needed rest.”

“A lot of the criticism comes from people who don’t know. They just talk. Usually it’s just people who talk for the sake of talking. They don’t read about or know about what is going on. They just want to attack people. They don’t do anything with their lives besides attack people. But that’s why I just see them and see myself and know that it won’t affect me.”

Canelo vs. GGG 2 takes place Saturday, Sept. 15 at T-Mobile Arena in Las Vegas and will be produced and distributed live by HBO Pay-Per-View beginning at a special time of 8:00 p.m. ET/5:00 p.m. PT.