The unbeaten Rolly (14-0, 12 KOs) gets a second chance to try and beat fellow Mayweather Promotions fighter Tank Davis after the trash-talking fighter was removed from the December 5th card due to sexual assault allegations.

Showtime quickly replaced Rolly with Isaac ‘Pitbull’ Cruz last December, and he put in a sensational effort in coming close to beating a less than 100% Gervonta. By the narrowest of margins, an injured Tank Davis held on to win a 12 round unanimous decision over Cruz.

Rather than give Cruz a rematch, which boxing fans were calling for, Tank Davis will defend against his WBA mandatory Rolly in their rescheduled fight. If the 27-year-old Tank is victorious, he’s rumored to be facing ‘Pitbull’ Cruz in the second half of the year, provided he doesn’t get an offer to take on the popular Ryan Garcia.

With the punching power of these two 135-pounders, it doesn’t matter where the fight is taking place because there’s almost guaranteed to be a knockout.

Tank (26-0, 24 KOs) will be facing the first puncher of his nine-year professional career and it’ll be interesting to see how he deals with the power of the bigger Rolly.

Rolly is hoping to pull off the upset because he believes a victory will not only make him a lot of money but will turn him into a PPV attraction overnight. That could be.

If Tank loses this fight, it’s going to be a huge blow to not only him but also Mayweather Promotions because he’s their only big money-maker in their stable. Unlike other promotional companies, they haven’t poured huge money into getting big stars like Canelo Alvarez and Anthony Joshua.

“That’s what’s going to happen. He’s never going to want to box again,” Rolly repeated. “I’m blowing up now. I’ve done pretty well blowing myself up on my own. Now it’s time to become a mega-star. That’s the point. Yeah, it turns me into a mega-star,” said Rolando when asked if a win over Gervonta will turn him into a star.

There wasn’t a lot of interest on Tank Davis’ part in the rescheduling of the fight with Rolly, as he has a lot of other great options for fights. He didn’t need to fight Rolly for him to get a huge match-up.

“I was the one who had to force this fight, because I’ve seen for years that he’s a chump,” Romero said to ESPN. “He’s made a career out of beating up 126-pounders.

“He doesn’t know half the stuff that I’ve seen and been through. I’m here to knock him out in the ring. He’s arrogant and tries to act like he’s tough, but I’m knocking him out.”

“Tank vs. Rolly Romero on May 28 at Brooklyn’s Barclays Center on Showtime PPV. Gervonta has already proven to be a big attraction in Baltimore, Atlanta, and Los Angeles. Now he takes the show to Brooklyn,” said Mike Coppinger. 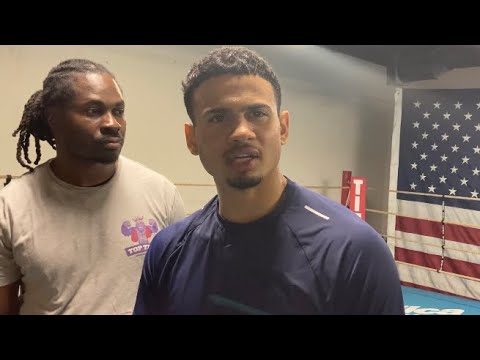