Gervonta ‘Tank’ Davis applauds Canelo Alvarez with his latest idea to move up to cruiserweight to challenge WBC champion Ilunga Makabu next May.

The former three-division world champion Tank Davis feels that Canelo (57-1-2, 39 KOs) is helping the sport of boxing by moving up in weight to different divisions to capture world titles.

Many fans feel ambivalent about some of the fights that Canelo has been taking over the last three years in fighting at 168 and 175. ‘

What the boxing fans have noticed about Canelo is the way that he’s picked out different fighters without facing the dangerous guys at 168 and 175. Fans want to see Canelo fight the best, but what he’s been doing is fighting belt-holders.

There’s a difference. Belt-holders are fighters that have been positioned by their promoters to capture either vacant titles or belts against flawed paper champions.

Canelo has been winning his titles against belt-holders that were nowhere near as good as some of the more talented fighters in their weight classes.

“I think that’s good. That motivates me to do the same,” said Gervonta Davis to Fighthype when asked about his thoughts on Canelo going up to cruiserweight to try and capture a world title in that division.

“A lot of boxers, I think that motivates them. But just seeing what he’s [Canelo] doing right now. When I said that Canelo is me at 168, I was talking about boxing skills,” said Gervonta.

“Everybody took it the wrong way, talking about his accomplishments. I was just saying that I have the same skillsets as Canelo at 130, 135,, and 140. I just feel like we’ve got similar styles.

“If not, I’m probably more slicker, I would say. What he’s doing for the sport and in the sport is big,” said Gervonta of Canelo. “I think that he’s motivated a lot of young fighters like myself to continue to try to be great,” said Tank Davis.

Gervonta says that what Canelo is doing in moving up in weight to capture world titles is motivating him to do the same.

It’s pretty obvious that Gervonta is already doing what Canelo is by moving up in weight to defeat the weaker champions or fighters to capture belts.

For example, rather than Tank Davis capturing his WBA lightweight title against Teofimo Lopez in December 2019, he fought 40-year-old Yuriorkis Gamboa.

Was it an accident that Tank picked the WBA title against Gamboa rather than Teofimo? I doubt it. That was a Canelo-esque move on Tank Davis’ part in cherry-picking a fight with Gamboa for the WBA ‘regular’ lightweight title.

In another example of Tank Davis following in Canelo’s footsteps in cherry-picking a title, when Gervonta went up to 140 to win a world title, instead of choosing to fight undisputed light welterweight champion Josh Taylor, he selected WBA ‘regular’ champion Mario Barrios. That was a far easier fight than if Tank had fought Taylor for the title. Again, it was a cherry-pick by Gervonta, and a classic Canelo-esque move.

“That’s not really my say,” said Tank Davis when asked if Canelo should fight David Benavidez. “Just them fighting each other is big for the sport.

“If it happens, it happens. If it doesn’t, don’t always blame the fighters,” said Gervonta on Canelo NOT fighting Benavidez or Charlo.

You’d have to assume that with Canelo’s tremendous popularity, he could easily fight Jermall Charlo or David Benavidez if he wanted.

I mean, there’s no network or promoter that’s going to get in the way of Canelo fighting those two fighters. Moreover, Benavidez and Charlo have already made it known to the boxing world that they’re ready to fight Canelo right now.

They’re just waiting on him. So if neither of those fights ever materialize, you have to put the blame on Canelo because those guys aren’t going to reject a massive $10 million+ payday that comes with fighting the Mexican star. That’s too much money for Benavidez and Charlo to avoid Canelo for fear of losing their ‘O.’

Canelo’s latest move to go up to cruiserweight to fight WBC champion Ilunga Makabu is just more of the same careful match-making he’s been doing since 2018 after his grueling rematch against Gennadiy Golovkin.

Instead of applauding Canelo for choosing to fight Makabu instead of Benavidez or Charlo, Gervonta Davis should be skewering him for what is an obvious cherry-pick. 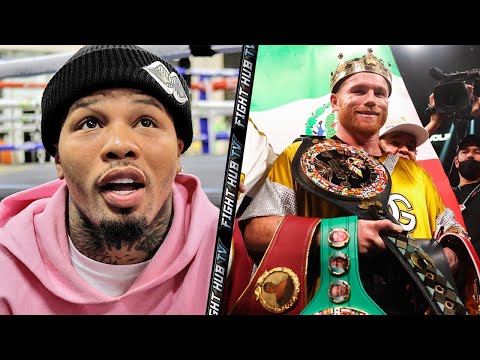