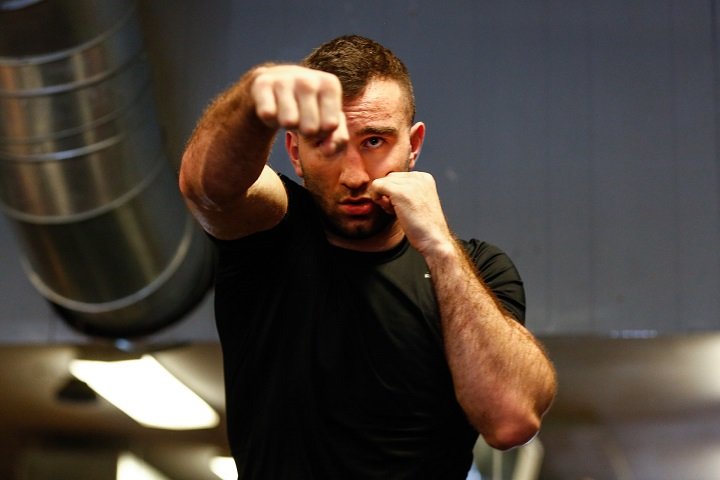 Promoted by Ringstar Sports in association with World Boxing Super Series, tickets for the live event are on sale now and are available at Ticketmaster.com. Tickets are also available to purchase at the Prudential Center box office.

“I’ve been working very hard in Big Bear, California with Abel Sanchez for about 10 weeks preparing for this fight. We are like a family up there. I have my Russian brothers, plus Gennady Golovkin, who is definitely like an older brother to me.

“Abel has helped me so much. He hasn’t tried to change my style. He’s just gone in and made my style better. He means so much to me.

“My last fight was my first title shot and I felt great in the moment. My nerves were calm and I feel like this is what I was made for. I want to be in this position for a very long time.

“My opponent has a lot of experience and has been in a lot of tough fights. He’s been in more fights than me, so I just need to be ready. I’m prepared for 12 rounds or a short fight. This is what I train for.

“I will show everyone what I am all about on Saturday night. I’m not a big talker, but I will speak loudly with my fists on Saturday.”

“Training camp went very well and I am physically ready for this challenge. You will see how strong I am mentally when I get in the ring on Saturday.

“Everyone knows that my experience will help me. I’ve had a lot more pro bouts than Gassiev. But I also will need to display smart boxing. I think I am the more intelligent fighter and will show it on Saturday.

“My first goal is to win and become IBF world champion. That would put me in a special place in the history of Polish boxing as a three-time world champion. Winning this tournament would be very prestigious and lucrative for me.

“It’s always great to have the support of the great Polish fans. They really support all of their guys from Poland. But I have lots of experience fighting on the road with no Polish fans so it will just be a nice bonus.

“I had a good camp. My sparring was strong and I was very happy with the training in Poland. I finished my camp in London for some new sparring and everything is all set for Saturday.

“I have a very good opponent. He’s going to use his boxing skills. We sparred with each other a few years ago and it was good, hard sparring for eight rounds. It could help me on Saturday but sparring is different from a real fight.

“It’s very important for me to fight in the U.S. and to perform well. I haven’t fought in the U.S. in seven years so I’m excited to be back. I’m motivated to do well and keep getting big fights.

“I’m fully concentrated on this opponent. I have to get in there and take care of my strategy. I don’t know exactly how the fight is going to go, but I will be ready and have a plan for everything.”

“I feel perfect physically. I’m ready to rumble on Saturday night. We’ve done all the conditioning, sparring and dieting to be in the right position on fight night. I did what I had to do.

“I’ve been training here in New York, mostly in the Bronx but also moving around and finding the best possible sparring to prepare for Saturday.

“He’s a tough opponent and I can’t underestimate him. I’ve trained to win. I’m going to come out on top one way or another.

“I’ve sparred with Masternak before, so I know what I’m dealing with. I’m going to go in there and pick him apart. He’s an aggressive fighter who will come forward and throw power punches, but I’m ready for that.

“I’m so happy with where my body is at heading into this fight. This is the best I’ve felt in a long time. The shoulder injuries are behind me and I’m healthy now.

“I can’t really say what the fight will look like but I hope everybody comes out Saturday to see the show. I feel comfortable fighting in the New York/New Jersey area and I can’t wait to go get this win.”

“Everything was perfect in training camp and I feel very strong. I worked well with my coach and we were on the same page all of camp. I worked very hard and I’m ready to show-off on this big card.

“I know that Culcay was a great amateur champion and an interim champion in the pros, so he’s obviously a very good fighter. But I will win this fight because I’m better and stronger more determined to get the win.

“I saw Culcay fight Demetrius Andrade. It was a good fight, but I don’t think Andrade performed well. Culcay lost but he made it very competitive so I know that he will be a challenge.

“I feel better at super welterweight than I did at middleweight. I always knew I could go down in weight and now was the time. So far I have felt much stronger at this weight.

“I am fully focused on fighting Culcay. First I must beat Jack Culcay, but I want to fight all the best fighters in the division. Jermell Charlo, Erislandy Lara and Jarrett Hurd, I’m ready for all of them.

“It’s a lot of extra motivation to fight in front of the Polish fans. They are the best fans in the world and I’m ready to perform.”

“I feel perfect physically. This was one of my best training camps ever. I trained for about five months in Germany. I had four or five very tough sparring partners to get me prepared for this.

“Sulecki is undefeated and that’s the most important thing I know about him. I trained my hardest for this and on Saturday you will see the best versus the best.

“I have speed, I have gained strength and I will show the mix of Ecuadorian and German styles. I was an amateur champion and now I’m going to be a champion in the pros.

“I learned against Demetrius Andrade that I can fight with anybody. I can compete with anybody in this sport. I’m going to show my experience on Saturday night.”

IBF champion Murat Gassiev and former champion Krzysztof Wlodarczyk will square-off in the closing matchup of the World Boxing Super Series cruiserweight quarter-finals as both men look to move one step closer to capturing the Muhammad Ali Trophy Saturday, October 21 from Prudential Center in Newark, N.J. and on AUDIENCE Network.

Promoted by Ringstar Sports in association with World Boxing Super Series, tickets for the live event are on sale now and are available at Ticketmaster.com. Tickets are also available to purchase at the Prudential Center box office.

The winner of this explosive showdown will be on to the WBSS semi-finals and a unification showdown against WBA champion Yunier Dorticos. The cruiserweight semi-finals will feature four world titleholders as these 200-pound champions each look to prove they’re the class of the division.

Click HERE for video highlights from the first round of WBSS action and see below for recaps of the cruiserweight action so far.

The first contest of the World Boxing Super Series was the cruiserweight quarter-final between WBO World Champion Aleksandr Usyk and Marco Huck at the Max-Schmeling-Halle.

Ukranian Usyk retained his WBO cruiserweight title and moved on to the next round of the Ali Trophy tournament by stopping German Huck in the 10th round.

The Olympic gold medalist from London 2012 forced his German opponent backwards and dominated with his power throughout the fight which proved why the number one seed is the tournament’s favorite.

In addition, the Ukrainian got new fans all around the world with his charisma inside and outside the ring.

With a combined 41 knockouts over 42 victories, Yunier Dorticos vs. Dmitry Kudryashov at the Alamodome promised an all-action fight. In a fight between two KO artists, Cuban Dorticos showed that he mastered his skill better than his Russian opponent.

The WBA World Champion proved that he is a dangerous challenger for everyone in the tournament when a perfect right hand sent Kudryashov crashing to the canvas in round two. Kudryashov was counted out and Dorticos lived up to his nickname: ‘The KO Doctor’.

10.000 ecstatic fans at the Arena Riga got what they came for: A victory for their hero, WBC World Champion Mairis Briedis when beat Cuban Mike Perez (22-3, 14 KOs) by a 12 round unanimous decision in a very competitive fight.

The 24-year-old Gassiev (24-0, 17 KOs) is a Russian who now lives and trains in the famed Big Bear, California. Last December, he won a 12-round split decision from Denis Lebedev (29-1) in Moscow to capture the IBF crown.

“I promise that I’m going to come into the ring to win and do everything possible to get this victory,” Gassiev said. “I want to take advantage of this opportunity to fight the best boxers in my weight class. It is a great honor for me to fight in the World Boxing Super Series for the Muhammad Ali Trophy.

“I have a very serious opponent in Krzysztof Wlodarcyzk who is a two-time world champion and his resume speaks for itself. He has fought the best and I’m looking forward to a very hard fight.”

Wlodarczyk will have decisive advantages over Gassiev in several categories including invaluable experience in world title fights (8-2-1, 4 KOs) and five victories against present or past world champions – Steve Cunningham, Giacobbe Fragomeni (twice), Danny Green and Imamu Mayfield – and he’ll also have the strong support of his fellow Poles who live on the East Coast.

A former IBF (2006-2007) and World Boxing Council (2009-2014) title holder, Wlodarczyk has fought his way back into title contention, winning his last four against opponents with a combined record of 115-12.

“I am very happy to have the opportunity to fight a champion like Murat Gassiev,” Wlodarczyk commented. “He is a young, strong champion like I was a few years ago, but I am ready to show that I am still the best in the division.”

The 10-round co-feature is a WBSS Substitute Fight between Polish cruiserweight Mateusz “Master” Masternak (39-4, 26 KOs), the former European titlist and Interim world title challenger, and Albania-born Stivens “Superman” Bujaj (16-1-1, 11 KOs), who lives in the United States.