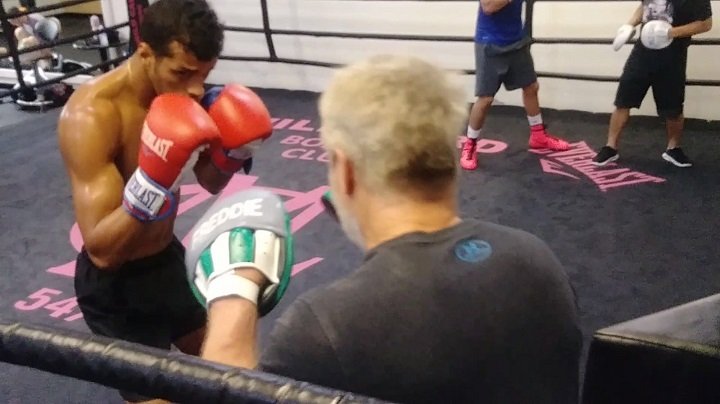 There are just mere few days until Jezreel “El Invisible” Corrales (22-1-0, 8 KOs) and Alberto “Explosivo” Machado (18-0, 15 KOs) go toe to toe in their highly anticipated 12-round battle for Corrales’ WBA Super World Super Featherweight Title this Saturday, Oct. 21 at Turning Stone Resort Casino. In the most important fight of their professional careers, both fighters shared their thoughts as they wrap up their respective training camps ahead of the championship main event, to be televised live on HBO Boxing After Dark® beginning at 10:05 p.m. ET/PT.

Corrales, a 26-year-old native of San Miguelito, Panama, trains at the Irving Saladino
Sports Complez in Panama City. Corrales is working hard to make the third defense of his title in only his second appearance both in the United States and on HBO. Machado, a 27-year-old native of San Juan, Puerto Rico will look to take advantage of his first world title opportunity and his first appearance on HBO. The bout is sure to produce fireworks as two of the best 130-pounders square off for a spot at the pinnacle of the stacked super featherweight division.

Here’s what the main event fighters had to say regarding their respective training camps:

“I am working really well in training camp. We are correcting errors detail by detail, and we are trying to get in the best shape for fight night.

“My team consists of former world champion Ricardo Cordoba, Juan Mosquera, and Juancito Malcom Mosquera. All three work on fight tactics and strategies with me. My physical trainer is the Cuban professor, Ismael Ortega.

“We are working a really great strategy, the details of which I cannot share. However, I will arrive in the best shape of my life on Oct. 21.

“My daily routine consists of doing roadwork in the morning. Then, after some rest, I join my team at the gym for the boxing workout. I close my training days with some more road work at around six in the evening.

“A victory would allow me to keep my world title and to retain my status as one of the best in my division. I dedicate this fight to all Panamanians, but especially to those in my home city of San Miguelito.”

“A great fight requires a great training camp and a lot of concentration. That’s what we’ve been doing. Everything is going super well, just as we planned.

“Working with Freddie Roach has been great. He prepares me and gives me the confidence necessary to be successful. His experience working in world title fights, along with the work in the gym, will be the key to winning this fight.

“The first time I came to train with Freddie Roach was with Miguel [Cotto]. This time I’m alone in training camp, which has been a completely different experience. We are preparing for a 12-round fight, and we have been making adjustments based on my last fight against Morales in August and looking at Corrales as well as his fighting style.

“I’ve trained for almost my entire career with southpaws, and I come from a boxing gym where most of the boxers were left-handed. Once you adjust, it is more or less the same fighting as fighting an orthodox fighter. The only thing that changes are the combinations, which we have adjusted according to Corrales’s style.

“Training includes sparring three days a week on Mondays, Wednesdays, and Fridays, with Tuesdays and Thursdays focusing on the technical work. All of this training is for the people of Puerto Rico, who I know will come out of recent events strong.”

Corrales vs. Machado is a 12-round fight for the WBA Super World Super Featherweight Championship, to be held Saturday, Oct. 21 at Turning Stone Resort Casino in Verona, New York. The main event is presented by Golden Boy Promotions in association with Cotto Promotions. The event is sponsored by TECATE, THE OFFICIAL BEER OF BOXING, Casa Mexico Tequila, and Thor: Ragnarok, and will be televised live on HBO Boxing After Dark beginning at 10:05 p.m. ET/PT.

Tickets for this highly anticipated match up are on sale now and available for $65 for ringside seats and others priced at $25, $30, $40 and $49, plus any applicable fees. Tickets can be purchased in person at the Turning Stone Resort Box Office, by calling 315-361-7469 or online at Ticketmaster (www.ticketmaster.com).