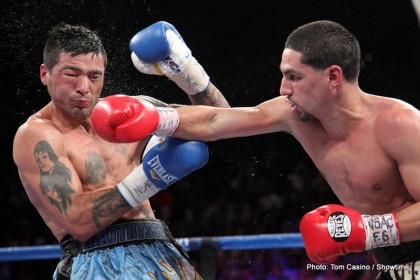 Danny Garcia Fights For His 0, Successfully Earning Another W

Unfortunately, despite heavy effort, the sports did not fly the way they were expected in this fight until the last couple of rounds. Both fighters had their moments, but it seemed that the urgency took charge in round 9-12, where both men went to work.

Garcia lost his possible 1 point advantage for dropping Matthysse when that same 1 point was deducted from his score due to the low blow.

I would like to call it a close fight, but due to the last few rounds, where Matthysse had clearly faded squeezing the last drops of his remaining stamina, Lucas was ripe for the picking.

Danny Garcia’s victory was rightful, and he showed that he is here to stay, and that his abilities in the ring are that of a true champion here to stay.

Does this fight warrant a rematch? Only the fighters will decide, but I think that Lucas did more than enough to earn it. There was no lack of heart or effort, where Matthysse came out all guns blazing form bell to bell.

Overall, I would assume that most fans had hoped for a denser fight with more action in the middle rounds, but now that it’s all done, congratulations team Garcia and tremendous effort team Matthysse.

Rd 1: The round started with both fighters showing respect, but evolved into a fight. Lucas landed a right to the body. Garcia not hurt. A few exchanges, but nothing of substance. Both fighters look sharp.

Round 2: Lucas lands a light left hook. Garcia not hurt. Lucas lands 2 punch combo. Lucas pressures Garcia, as Danny moves back. No one is hurt, but a clear round for Matthysse.

Round 3: Danny lands a right. Both fighters throwing but the defense is there to prevent anything solid landing.

Round 4: This was definitely an action round. Both fighters did a lot of work and landed. I would have to say that Garcia was more successful keeping the action going.

Round 5: The fight seemed even until the very end of the round where Lucas came with a combination of 4 straight 1-2 combination. That may have given him the round.

Round 6: Both throwing punches and looking winded. Lucas seems to be landing more, yet nothing solid. Lucas has Garcia against the ropes. Lands a shot. Garcia is not hurt.

Round 7: Lucas is clearly the aggressor. Danny lands a sloppy right. Lucas with a combination with Danny on the ropes. Neither fighter is abandoning defense. Garcia lands a 1-2. Lucas is not hurt.

Round 8: Both fighters land shots. Lucas is still the one coming forward. Danny throws a hook, but is blocked by Lucas. Thus far an action round with both fighters doing a great defensive job.

Round 11: Action from the bell. Lucas lands consistent punches. Garcia loses mouthpiece. Garcia is in defense mode. Garcia against the ropes. Lucas land a body shot. Garcia lands a solid right. Lucas down. Knockdown. Lucas is ok. Doesn’t look hurt. Garcia with a combo but blocked. Both trading. Great round for both. Garcia scored a knockdown, while Matthysse landed solid shots on Garcia.

Final Round: Lucas coming forward. Garcia with a solid right hook. Danny with a right. Matthysse getting very sloppy but is throwing. Point taken from Garcia for a low blow. Lucas is ok. Both throwing and landing non-stop. Bell rings. Amazing round.