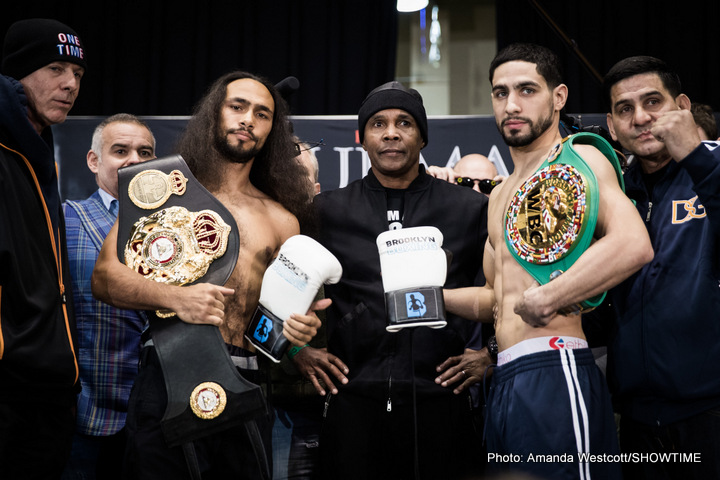 The welterweight division has long been one of Boxing’s most storied divisions. Tonight, the welterweight division will sit center stage again as fans get to witness the first unification bout on network TV in over 20 years. There’s no better way to do it than with two undefeated power punchers. There’s been a lot of talk surrounding which of these two men will be the torch bearer for the division in the post-Mayweather era. Some feel it’ll be Danny Garcia (33-0, 19KO’s). Others tip their hat to Keith Thurman (27-0, 22KO’s). Other names remain in the mix, but for tonight, these two young lions get to make their case. As we prepare for this clash, we analyze Keys to Victory, Four to Explore, and an Official Prediction.

For Danny Garcia, Keys to Victory will be a bit complex, as they will require him to do things we know he can do, yet haven’t always seen him do. The most basic keys to victory for Garcia will be the jab and body work. The jab is a very underrated weapon of his that works quite well when he actually decides to use it. He’ll need to start the bout with his jab and make sure it grows stronger throughout the rounds. A more complicated key to victory for Garcia is where the trouble begins, as it would put him in a role that’s not as familiar. Typically, Garcia plays the role of a counter-puncher, allowing him to set up that monstrous hook. But if he wants any shot at victory tonight, he’ll need to keep Thurman on his back foot. Pressure and body work will give Thurman less time to think. If Danny can keep him off balance, he’ll coast to victory.

For Thurman, Keys to Victory are a bit more simple. Although Garcia has shown us shades of greatness, Thurman is actually the better all-around pure boxer, with statistics to prove it. History shows us that he’s harder to hit, and even with a bull like Shawn Porter, he displayed great poise dealing with the pressure. Tonight, however, he’ll have a different animal in front of him. Thurman will need to also start with a jab. He has a slight reach advantage, and wants to use it to avoid being in close quarters with Garcia due to Garcia’s great counter-puncher. The biggest key to victory for Thurman will be stepping up his pressure. If there’s two things that have troubled Garcia, it’s pressure, and big punchers. Contrary to popular belief, if Thurman can pressure Garcia early and soften him up a bit, he certainly has the power to stop him late.

WEIGHT OR WAIT?: A glimpse at the two resumes involved presents an element of truth that’s impossible to go unnoticed. In the case of Danny Garcia, the initial observation is that he has faced a better level of competition than Thurman. In name recognition, one would have to agree. But should they? Although Garcia has faced a better selection of opponents, you could argue that only one was a legitimate welterweight (Guerrero). From Peterson, to Herrera, and down the line, reality tells us that Garcia has never faced a true welter, let alone a power-punching welter. Tonight, he will. The decision to “wait” so long to put him in the ring with someone at this prime “weight” led many to view him as a “cherry picker”. Was the “wait” to face this “weight” worth the wait? A lost tonight could end that debate.

STATS ARE FACTS: An old adage says “men lie, and women lie, but numbers never lie! When we check the stats etched in history between these two men, they tell a truth that the betting odds apparently didn’t consider. Garcia is viewed as the better fighter of the two, but what do the numbers say? In average punches thrown, Keith Thurman leads 457.8, to Garcia’s 435.3. In average punches landed, Thurman leads 159.9 to 134.9. In connect percentage, Thurman leads 34.9, to 31%. Now, lets talk defense. Thurman’s opponents have averaged 377.3, Garcia’s opponents have averaged 378.1. Having an almost identical number of punches thrown at them, Thurman’s opponents have landed 88.4; Garcia’s, 106.2. Opponent connection rate is 23.4 for Thurman, while Garcia’s opponents landed at a rate of 28.1. The numbers tell us that Thurman has landed more, and was touched less, against naturally bigger men. Can Garcia overcome these deficits against a power puncher?

BODY DOUBLE: An important key to victory in this bout for both men lies in the art and essence of body punching. We’ve all witnessed both men hurt several times at the hands of dedicated body punchers. But how does this reconcile in a clash between the two where both will aim to play that very card? Thurman can be vicious to the body, but Garcia has arguably had more success in this area. Although Garcia has the penchant to bang the body most, the issue for him lies in whether or not he’ll be willing to get that close to such a power puncher? That, and that alone will dictate how this fight is fought, and how it is ultimately won.

SIZE MATTERS: Although both men campaign at welterweight, Thurman is easily the naturally bigger man. Not only has Thurman been the bigger man facing bigger competition, but at least once in his career, Thurman crossed the line to Super Welterweight, stopping a very solid Carlos Quintana in only 4rds with both tipping the scales at over 150 pounds. Tonight will be the first time in Garcia’s career that he’ll face anyone that’s been north of that border. Does this mean anything in the final analysis? Tonight we get to find out.

The welterweight division is getting as hot today as it was only a few years ago when the likes of Mayweather, Pacquiao, Cotto, Margarito, Williams, and others stood center stage. As the process of elimination continues, the winner of tonight’s scrap will emerge as a top 3 in that equation. Both Garcia and Thurman have come with a set of mixed emotions. There have been nights where both of these men looked above average; and there have been nights where they both looked rather ordinary. The beauty in tonight’s clash is that we haven’t seen either fight when the stakes are this high. Execution will dictate which man is the rose, and which is the thorn. Roses have beautiful cosmetics, yet melts in the heat. Thorns remain firm and on point despite the heat. With statistics and natural progression at his side, my official prediction is:

Jake Paul reflects on KO of Ben Askren: I told you I would do it in the 1st
Follow @eastsideboxing