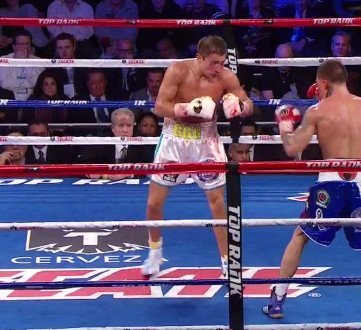 By Peter Wells: After a great night of boxing on Friday night for all UK fans on Boxnation followed by one of the best Prizefighters to date, the whole world was treated to another great nights action to round off a superb weekend. Boxing 2013 has well and truly kicked off, after a triple-header full of explosive punchers.

To kick off the three world title fights was the fight of the night between pressure fighter Roman ‘Rocky’ Martinez and the powerful counter puncher Juan Carlos Burgos. It was to be another classic instalment to the Puerto Rico-Mexico rivalry.

The challenger for the WBO Super Featherweight title, Burgos, started the faster, but both fighters landed heavy blows in the first round. It was an exciting round where Burgos’ quick combinations won the round over Martinez’ single big right hands. The fight stayed relatively in the centre of the ring where Burgos had his most success but occasionally the champion would force his younger foe onto the ropes where he would later have huge success.

Four rounds gone and although the fight hadn’t quite caught fire, Burgos seemed to have taken all the rounds, which invoked a response from the champion in the fifth. Martinez started to force the pace more but Burgos had plenty of success too. Martinez banged his chest whenever Burgos landed a solid punch, calling for the challenger to engage in a brawl that would suit the champion down to the ground.

Although Burgos refrained from going toe-to-toe Martinez started to force him back to the ropes and the momentum was starting to shift into ‘Rocky’s’ favour. Rounds 6 thru 9 were clear Martinez rounds, but the challenger found a second wind in the 10th round as Martinez seemed to tire slightly.

Suddenly the fight was back in the centre of the ring and Burgos at times became the aggressor for the final 3 rounds of action. At the final bell both fighters had fought a great fight, both having their successes but for me there could only be one winner, and that was Juan Carlos Burgos. Despite a huge majority in the boxing world also scoring for Burgos, one judge favoured Martinez (116-112) the other scoring to Burgos (117-111) before the final scorecard was read out as (114-114), declaring a split draw and Martinez holds onto his belt.

Not many will agree the right man won but there should be calls for a rematch after an entertaining 12 rounds.

In the next bout hard hitting Kazakh, Gennady Golovkin ripped up the tough and brave warrior, Gabriel Rosado. Golovkin who has surely now sold himself to the American audience after yet another ferocious display of power and a granite chin.

Rosado never came into the fight as a puncher, but he did land some clean shots, especially in the 5th, but ‘GGG’ was never deterred and came forward methodically all fight. After the 2nd round Golovkin started to cut up the Philly challenger for his WBA ‘World’ Middleweight title. Rosado’s nose was bleeding badly and he then suffered a horrible cut on his left eyelid. Golovkin just came forward minute after minute, round after round, pounding away with solid shots. At the beginning of the 6th Rosado was badly rocked but managed to hold onto into the 7th, when Rosado’s corner rightly threw in the towel to save their man from further unnecessary punishment.

Rosado showed tremendous heart, and has left the ring with more respect and more fans than he had before, while the champion is now the fans favourite to take on Middleweight sensation, Sergio Martinez.

The final fight of the night was billed as an early candidate for fight of the year, but instead Mikey Garcia came up with a sumptuous performance that has himself labelled as one of the hottest talents in boxing right now. Garcia showed everything that a 25 year old rarely is able to show, he had power, speed, timing, accuracy and listened to every word of advice that his brother and trainer, Roberto Garcia gave to him.

Orlando Salido came in as the WBO Featherweight champion, with an impressive work rate and a ‘never say die’ attitude. Last night he never said die, but Garcia was not going to allow the 52 fight veteran take all the headlines, like he had twice against JuanMa Lopez.

Garcia stated his authority in the first round, landing a crisp left hook, catching the champion off balance for an early flash knockdown. At the end of the first the same happened again, once again the champion was unhurt but couldn’t cope with the impeccable timing of the young Garcia. Garcia remained in control in the 2nd before flooring Salido again in rounds 3 & 4, giving him a ridiculously large lead after just 4 sessions.

The 5th lacked a knockdown but Garcia still dominated and seemed to land with his hardest punches of the night, but the champion seemed to have finally found his balance. In the 6th Salido started to charge forward, launching huge bombs, but Garcia’s chin was as good as the rest of his armoury.

Into the 8th and Salido was starting to win rounds but was still in need of a knockout, and as he become more and more aggressive his head accidentally collided with Garcia, breaking the challenger’s nose. In the corner at the end of the 8th the doctor advised the referee that Garcia has suffered a broken nose and could not continue. The fight headed to the scorecards where there was only one winner, (79-69, 79-69, 79-70) all for the new champion, and new star, Mikey Garcia.

Garcia insisted afterwards he will give Salido a rematch, although it is not needed, fans now know that any Orlando Salido fight is worth watching. Garcia though is on another level and if he keeps up these fine performances against the top fighters at Featherweight and Super Featherweight he could well be finding himself on many people’s pound-for-pound lists comes next year.