WBC middleweight champion Jermall Charlo (31-0, 22 KOs) says he’d be interested in fighting Canelo Alvarez or Gennadiy ‘GGG’ Golovkin next after he defends against Juan Macias Montiel (22-4-2, 22 KOs) tonight in their bout on Showtime Boxing at the Toyota Center in Houston, Texas.

Charlo, 31, says he wants to fight once or twice more in 2021, and he’d be up for one of those fights against Canelo or GGG.

Jermall says he doesn’t want to give the impression that he’s looking to fight an old guy in 39-year-old IBF middleweight champion Golovkin, but he does hold a title right now. It’s a logical fight to be made, given that GGG is a world titleholder at 160.

Charlo will fight Canelo or GGG next if offered

“It’s up to Montiel to respond to me and do the things he says he’s going to do,” said Charlo to Fighthub. “I’m a fighter, and I’m going to fight him.

“I’ll take it,” Jermall said when asked if he would agree to a fight with Gennadiy Golovkin or Canelo Alvarez if offered to him next.

“I got another fight by the end of the year. I’d probably like to fight two more times. I know it’s summer already.

“I feel like I can end GGG because look what I did to Derevyanchenko, who they said he had a hard time with him,” Charlo continued.

“I just don’t want to pick on an older man [39-year-old Golovkin] and make it look like I’m picking on older prey, but he does have a belt.

There is a time to unify before he runs out of gas. My legacy is on the line; I fight for my legacy. If I fill the Toyota Center, just imagine what I would do with a Canelo,” said Jermall.

Hopefully, Charlo doesn’t hold his breath, waiting for Golovkin and Canelo to throw him a bone by offering to fight him next. That’s not going to happen.

Right now, Canelo and Golovkin don’t know Charlo exists, thanks in part due to the way that he’s being matched against poor opposition.

Jermall is being matched in the same way that Demetrius Andrade, being fed obscure opposition that fans have never heard of.

Charlo’s fights don’t generate any buzz due to him continually facing lesser opposition in the same way Andrade does, which ultimately makes it easier for the stars Canelo and Golovkin to ignore him.

With Charlo failing to increase his name brand, he’s not a value-add for Alvarez and GGG to fight. It’s almost as if Charlo is still a contender and not a champion because he’s being matched like a contender.

As a champion, you’re supposed to fight the best, but Charlo is continually falling short of that.

Right now, the perception is that Jermall is ducking David Benavidez and making excuses for not fighting Demetrius Andrade and Canelo.

Charlo says he can hold his ground with Canelo and Golovkin

“I like Canelo, I like what he’s done for his career; he’s a legend in the sport,” Charlo continued. “I’m not tampering with the fact that the dude is who he is, but I’m a real fighter myself.

“I’m down to fight; boxing is boxing. I got enough experience to hold my ground.

“I’m ready to fight a big name, but if I can’t get the big names in there with me, I’ve got to continue to make money and support my family, so that’s what I’m doing.

“I wouldn’t want nobody to walk up on me; I’m not approachable like that,” said Jermall when asked if he would walk into one of Canelo’s press conferences to call him out.

“I thought it was corny, but [Demetrius] Andrade needs help,” Jermall said about Andrade invading Canelo’s post-fight press conference last May to call him out after his win over Billy Joe Saunders.

“Andrade needs stuff like that; I don’t. I’m past the level where I got to call people out and keep walking up on fighters, ‘Hey, let’s fight.’ I can’t make the fight right now.

“So, if anything, you’re going to make Canelo not give you a chance. He is in the position to say, ‘yes’ or ‘no,’ so I thought it was a clown move [by Andrade].

“It was an old-school tactic that stuck in their brains. People calling each other out, but I’m here to fight the best of whoever they put in front of me,” Charlo said.

It’s easy for Jermall to say he would hold his ground against Canelo or Golovkin, but it’s a different story for him actually to do so.

Unfortunately, we may not ever find out because it doesn’t look like either of those superstars are going to bother fighting Jermall. Golovkin never mentions Charlo, and he seems to be more interested in staying busy fights until he gets his trilogy with Canelo.

As for Canelo, he has an excuse for not fighting Charlo because he’s in the process of becoming the undisputed champion at 168.

If Canelo can do that, he likely won’t bother fighting Jermall as long as he chooses to remain at 160, defending his WBC title against obscure opposition the way he’s been doing for the last two years.

Jermall could put huge pressure on Canelo to fight him if he vacated his WBC belt and moved up to 168 to get in his solar system, but he’s unwilling to do that right now. You can understand why Jermall is choosing not to give up his WBC 160-lb belt.

Jermall Charlo playing it safe at 160

Boxing fans forget that Charlo is getting paid good money by Showtime to defend his title on their network, and it doesn’t seem to matter that he’s facing weak contenders that most casual boxing fans have never heard of.

If Jermall were to give up his WBC title to move up to 168 as a contender, it’s possible his paydays would drop off for his Showtime fights, and that’s likely one of the reasons he’s not willing to make that move.

You can argue the other major reason why Charlo isn’t willing to go up to 68 is the fear of the unknown. He doesn’t know that he can beat guys like David Benavidez, Canelo, Edgar Berlanga, David Morrell, Caleb Plant, or Carlos Gongora.

If Charlo moved up to 168, he could fail, and his paydays on Showtime would evaporate quickly. Hence, Charlo chooses to play it safe by staying at 160 and defending his WBC title against obscure opposition that presents no threat to beating him.

“I don’t know what Canelo’s plan is; I haven’t talked to their team,” said Jermall.

“The last thing I heard, he was going through something with Oscar De La Hoya. I’m here to fight Juan Montiel.

“If they give me Canelo next, I’ll be prepared for him. I’m one of the best in the world; I’ll give you a chance to see sooner or later.

“A lot of fans don’t like when you just keep talking about you and me and things like that. I’m a boxer; that’s what I do. I’m very strong, and my mind frame is different.

“If [David] Benavidez can make 160, we can do it,” said Jermall when asked if he’d be interested in fighting former two-time WBC super middleweight champion Benavidez (24-0, 21 KOs).

“If we could do a catchweight in between 160 and 168. Benavidez is a 168-pounder that hasn’t made the weight [for his fight match two fights ago against Roamer Alexis Angulo].

“He has no title; he has nothing to offer me. That’s why people keep mentioning Canelo and Golovkin, the higher stakes.

“I would fight Benavidez; he’s no problem to me. He’s probably like this guy [Juan Macias Montiel] that I’m going to fight now.

“They talk a lot, ‘I’m strong, this and that,’ but it’s different when you get in there, and you have to figure something out. Man, don’t listen to it. Fans, we got bigger things in store.

“My brother is going to whip the s*** out of that dude,” said Jermall about his brother IBF/WBA/WBC junior middleweight champion Jermell Charlo taking on WBO champ Brian Castano for the undisputed championship at 154 soon.

It’s not realistic to hope that David Benavidez will be able to fight Charlo at a catchweight between 160 and 168, but you never know.

Jermall sounds disingenuous when he says Benavidez has nothing to offer him in terms of titles.

It doesn’t matter that Benavidez doesn’t have a title right now, considering that he’s unbeaten, well-respected, and viewed as the #2 guy at 168 in the eyes of many boxing fans.

So for Jermall to be devaluing Benavidez because he doesn’t hold a title at the moment suggests that he’s making an excuse so that he doesn’t have to fight him.

It would be interesting to see what Jermall says if Benavidez agrees to fight him at a catchweight of 163.5 lbs. Does Charlo take the fight, or does he dismiss it, saying that Benavidez has nothing to offer him?

With Charlo fighting guys like Montiel, Brandon Adams, Dennis Hogan, and Sergiy Derevyanchenko, he has no excuse for not wanting to fight Benavidez. He’s a huge upgrade from those guys. 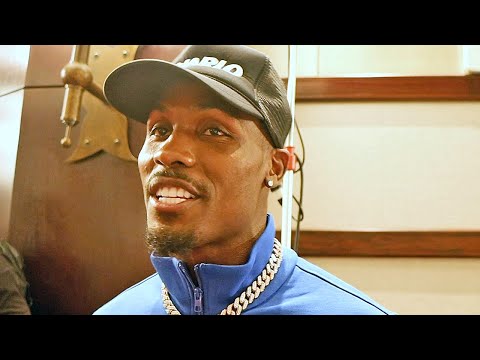