July 24th could turn out to be quite the heavyweight night. The third fight between bitter rivals (as in as bitter as can be) Tyson Fury and Deontay Wilder will headline, while Mike Coppinger reports how there will be no less than three heavyweight bouts serving as support.

Robert Helenius will again try to take out Adam Kownacki, this in a rematch of their March 2020 fight. Unbeaten duo Frank Sanchez and Efe Ajagba will get it on, and unbeaten heavyweight prospect Jared Anderson will face Vladimir Tereshkin.

Not a bad card at all. In fact, much praise must got out to Top Rank and PBC for matching some of their best fighters together. A big shout out to the Ajagba-Sanchez fight in particular.

Two young, unbeaten, and very promising heavyweights agreeing to risk their “0” is quite a rare thing. This one, between Cuba’s Sanchez and Nigeria’s Ajagba, could turn out to be the fight of the night.

In his most recent fight, Ajagba scored a chilling KO over Brian Howard, this to improve to 15-0(12). Sanchez, 18-0(13) says he will become Cuba’s first world heavyweight champion and if he can defeat Ajagba, he might get his chance.

The Helenius-Kownacki rematch will likely prove explosive, for however long the return lasts. It was a big upset when the tall and experienced Finn took out “Baby Face” of Poland over two years ago.

Neither guy has fought since so there could be plenty of ring-rust in display early on. Who gets the KO this time, Helenius, 30-3(19) or Kownacki, 20-1(15)? This one could go either way.

As for show-opener Anderson, “The Real Big Baby” has plenty of people excited, this after having had just nine pro fights, 9-0(9). The 21-year-old from Toledo, Ohio just might be the best young and unbeaten heavyweight prospect out there.

Tereshkin, a 23-year-old southpaw from Russia, is currently 22-0-1(12) and this could be a risky fight for Anderson. 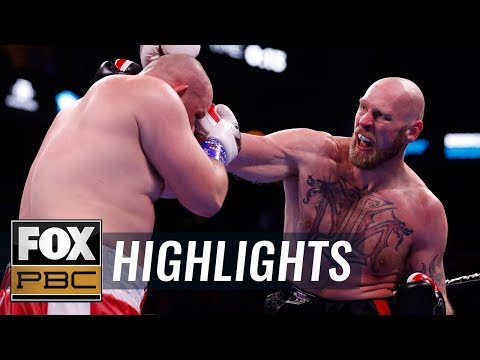 There are no obviously notable names on Tereshkin’s record, but he is coming off a win over a corner retirement stoppage over a 23-0 Francisco Silvens, this back in November of 2019. And Tereshkin is a big guy at 6’6.”

Four heavyweight fights on July 24th in Vegas, each of them unlikely to go the distance. It could prove to be a great night for memorable knockouts.