Fans can watch the replay of the Deontay Wilder vs. Tyson Fury 2 rematch tonight on FS1 at 9:00 p.m. ET. Get your popcorn ready to see these two big heavyweights go at it tonight.

For boxing fans that want to see for themselves if WBC heavyweight champion Wilder (42-1-1, 41 KOs) was weakened from the heavy ring-walk vest that he wore into the ring, they can watch for that.

The fight is an interesting one because Fury (30-0-1, 21 KOs) turned the tables on Wilder by going after him with his power game, and stopping him in the 7th round. It didn’t hurt that the 273 lbs Fury had a huge 42 lb weight advantage over the 231 lb Wilder, and that seemed to make the difference in the fight.

Whether that’ll work for Fury in the trilogy contest in the future is unknown. It could well be that if Fury attempts to mug Wilder, he’ll get poleaxed next time, but that’s how it goes. Overconfident fighters end up getting knocked out sooner or later.

“Yes, of course, it does,” said Warren to Boxing Social when asked if the coronavirus puts the skids on a fight for the undisputed heavyweight championship between Fury and Anthony Joshua. “First of all, he [Fury] has a contractual commitment that has been invoked by Deontay Wilder’s team. He has to fulfill that obligation before he can even get there.

“What we were hoping was to get that fight out of the way in July. Obviously, that’s not going to happen. America is on lockdown right now, and the Commission is saying no boxing. The contract states the rematch must take place in the States. So that’s where we’re at. So until that obligation is fulfilled, we can’t even look at an Anthony Joshua fight.

“I can’t tell you anything about that. I don’t know,” said Warren about the news of the Fury vs. Wilder 3 fight being moved to October 3. “Vegas is shutdown. It’s not just boxing. They’ve laid off all the casino workers. All the hotels and casinos are shutdown. Who knows what’s going to happen?

“Of course, there will be talks, but what are you going to talk about? The first thing is what date is it going to be. Nothing is going to happen, unfortunately. I can’t tell you when the fight is going to be on. We’re in the same position as everybody,” said Warren.

There’s no way of putting a date on when the Fury vs. Wilder 3 fight will go ahead. Although a site recently came out and said that the trilogy will be taking place on October 3, that’s speculative at best.

It’s still too early in the game to know when the coronavirus will disappear, and the fight isn’t going to get made between Fury and Wilder with that highly contagious virus making it impossible for fans to come together. It could be that the only way for sure to have the Fury vs. Wilder III fight go ahead this year is if it takes place behind closed doors.

“It’s stupid,” said Warren to Boxing Social on the suspicions some fans have about Fury’s gloves for his rematch with Wilder. “What planet to people come from? What happens with guys before they get inside the ring? They wrap their hands in the dressing room.

“One guy from each camp goes to oversee it, plus you’ve got a representative from the Nevada Commission that stands and watches and makes sure the hands are wrapped correctly.

“Both sides watch that. They then sign the wraps. Then when they’re ready to glove up, someone from either camp comes into the dressing room and watches them glove up. What happens then is the gloves are taped, and then the Commissioner signs the tape. So your gloves are on tight. So everybody knows you can’t pull your hand out because they’re taped and signed.

“In the dressing room, there’s a Tv camera showing scenes from the dressing room. So how on earth would you do that? It’s the most ridiculous and pathetic, stupid thing I’ve ever heard. And anybody that would even give it credence has to be an imbecile and knows nothing about the sport,” said Warren.

The glove conspiracy theorists are wasting their time. Wilder was in trouble long before Fury’s left glove appeared to start slipping from his hand. Wilder was utterly overmatched in the fight, and he never stood a chance against Fury. There are things that Wilder could have done to keep from losing, but he wasn’t prepared. 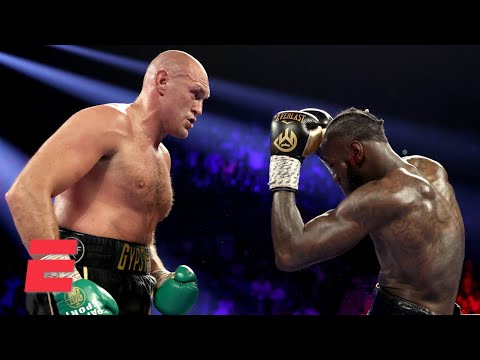