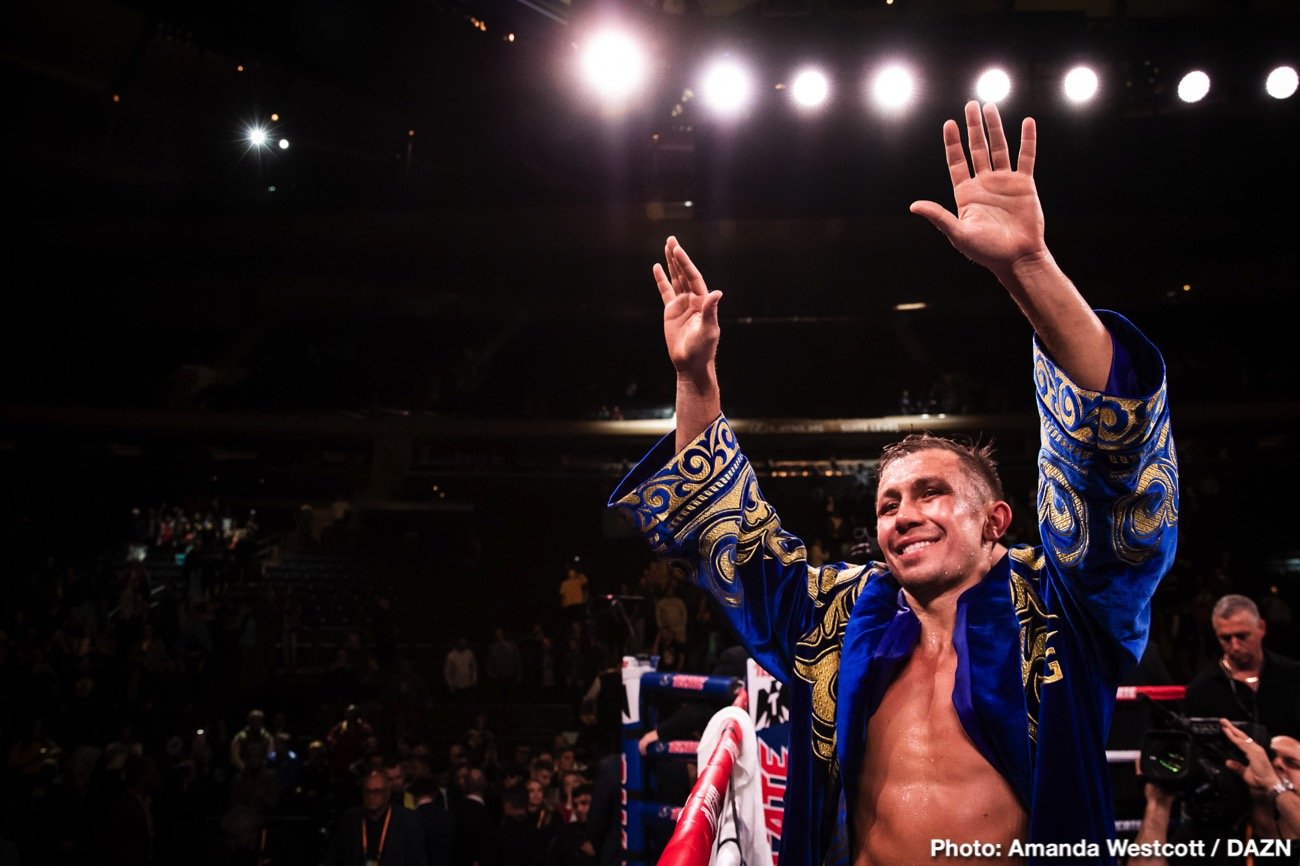 Amir Khan says he thinks Gennadiy ‘GGG’ Golovkin stands little chance of beating Canelo Alvarez in their trilogy fight which is tentatively scheduled for September 12 and is just looking or a payday. Khan views IBF middleweight champion Golovkin (40-1-1, 35 KOs) as just looking to get a payday from the third fight with Alvarez (53-1-2, 36 KOs).

Unfortunately for GGG, the coronavirus could stop him from getting the cash-out fight with Canelo in 2020, as there’s a strong possibility that the sport of boxing could be shut down for the remainder of this year.

Golovkin will be turning 38 next month on April 8, and he’s coming off of arguably his worst performance of his career against Sergiy Derevyanchenko on October 5 last year. GGG did win the fight by a 12 round unanimous decision, but the boxing public is split in who they saw winning the contest.

Even if you want to say that GGG deserved the win, you have to admit it was close and he looked poor. Dervyanchenko had GGG hurt several times in the contest, and came close to putting him on the deck in round 5.

Canelo is at his peak – Khan

“Saunders is a big, big heavy guy, quite broad and quite similar in similar size as Canelo,” said Khan to Fighthype. “I just feel like Canelo is one step ahead of everyone. The guy is a beast. You can’t disrespect him for what the guy has done in the sport, you have to have him #1.

“The guy is dangerous and at the top of his game, and he’s young and at the peak of his career. I don’t see no one touching him in boxing, skill or power. The guy has everything on his side.

“Can you believe that?” said Khan in talking about Canelo’s recent win over WBO light heavyweight champion Sergey Kovalev. “It shows you how big and how thick Canelo is. His bone structure and everything, it shows that he still has the power at that weight.

“It would have been fine if he’d won the fight from a distance, but he destroyed him and hurt him [Kovalev] and knocked him cleanout. That shows the power. This guy has got some tremendous power,” said Khan on Canelo’s power t 175.

Canelo might not be at his peak, but he’s doing a good job of picking the right fights. He did well in selecting Sergey Kovalev at light heavyweight rather than Dmitry Bivol or Artur Beterbiev. Had Canelo selected either of those guys to fight, Khan might be whistling a different tune about the Mexican star.

His chances of beating Beterbiev and Bivol would have been extremely remote, and he might have been humiliated by both. Picking Kovalev, who is 36 and no longer in his prime, was seen as an example of Canelo selecting a fighter at the right time. In a further example of that, Canelo didn’t fight GGG until he was 35 and coming off of two recent poor showings against Kell Brook and Daniel Jacobs.

We don’t know if Canelo is at his peak because he’s not fighting other guys at their peak. Saunders’ peak was several years ago, and he’s looked horribly bad since moving up to 168. He looks fat and not well-suited for the division.

“At the same time him fighting GGG, no disrespect to GGG, I think GGG is a little bit older, and he may be doing it for the big payday, he knows he’ll make huge financial gains.

“The thing is now I don’t think he’s the same GGG as he used to be, especially a GGG that is getting older and is slowing down against a Canelo that is coming up, getting stronger and coming more into his peak, it’s going to be all day long Canelo’s fight.

“I think he’s more confident,” Khan said about Canelo. “He tries to use his head movement a little bit more, and he tries to box a little more times as well. I think he’s starting to believe in his boxing skills more now than just his power. When he fought me, there was no boxing skills. He just had his tight guard, and he really wasn’t doing much, whereas now you can see that he’s trying to box a little bit more.

No one thinks Golovkin is the same fighter he once was, but what’s interesting is he was still able to fight Canelo to a standstill in both of their fights. In their first fight in 2017, Golovkin fought Canelo to a controversial draw. Many boxing fans thought GGG deserved the win in that fight. In their rematch in September 2018, people overwhelmingly had the fight scored a draw. Canelo was given a 12 round decision win over Golovkin, but it was controversial just like the first fight between them.

Those contests showed that even an old Golovkin was good enough to fight Canelo on even terms. If you look at the larger picture, it suggests that Canelo isn’t as good as many people think he is. He’s a good fighter, but the fact that he’s been selective about the fighters that he’s faced, and picked a lot of guys that were getting on in years tells the story about why he’s been successful.

Canelo’s decision to face Saunders rather than Callum Smith, Caleb Plant or David Benavidez is another example of him being careful about who he picks for his fights. He moved up to 175 and didn’t fight Bivol or Beterbiev, and now he moves back won to 168 and chooses not to face Plant,  Benavidez or Smith.