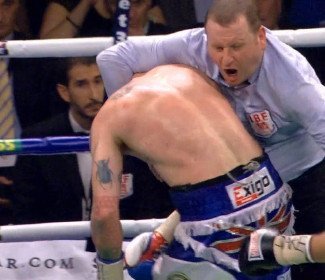 In a classic case of poor refereeing, IBF/WBA super middleweight champion Carl Froch (32-2, 23 KO’s) stopped George Groves (19-1, 15 KO’s) in the 9th round on Saturday night when the referee jumped in between the action of the two fighters and stopped it in the middle of an exchange at the Phones 4u Arena, Manchester, United Kingdom.

It was an incredibly weird stoppage and pathetic at the same time because the referee did a disservice to all the paying fans by prematurely stopping the fight.

Froch hurt Groves with a big windup right hand to start the ball rolling for the stoppage. Groves held onto Froch briefly to try and clear his head, but then Groves seemed to be already and got separation. The two of them then exchanged shots and Groves was then bulled to the ropes by Froch. Froch then flurried on Groves, missing some of his shots and landing one punch to the head. It was at this point that the referee grabbed Groves around the waist and pulled him away while he was still looking like he had a lot of fight in him. It just looked like a bone-headed move by the referee, and it’s hard to believe that a referee could screw up a fight as bad as this guy did.

What’s interesting is that the referee chose not to halt the fight in the 1st round when Froch was hurt far worse than Groves was after getting knocked down by a right hand. Froch was badly shaken, yet the referee let the fight continue rather than grabbing Froch around the waist and halting the fight.

After the referee messed things up with the early stoppage, the crowd booed loudly, letting the referee know how badly he messed up the fight. In the meantime, Froch said to the crowd that the referee had done the right thing.

Froch’s promoter Eddie Hearn didn’t seem to be all that pleased with the outcome of the fight. No doubt he wasn’t too pleased to have a referee mess up what perfectly a good card with his poor stoppage. Hearn went through all the trouble to put together an excellent card only to have a referee destroy the good time for the fans by stopping the fight too quickly.

Froch echoed Hearn’s thoughts, saying “Eddie, maybe we’ll have a rematch to sort it out.”

Froch got away with a lot of fouls in the fight, and it was odd that the referee kept stopping the action to warn him but not taking points off. I lost track of the times that Froch hit on the break, and nailed Groves with elbows. Why the referee didn’t take points off from Froch is unclear. It just gave me the impression that he wasn’t on his job in this fight, and the stoppage was the coup de grace. I didn’t think the referee could do a worse job until he looked totally clueless and halted the fight prematurely.

Froch said “It was a fair enough stoppage. I felt I had a couple more free shots on him and I was lining him up for the uppercut. He was struggling, that last one or two shots can do great damage in this sport. The referee has to make a split-second decision. It’s the referee’s decision. I don’t have any sympathy for him. You have to put yourself in the referee’s hands.”

It almost sounds like Froch’s making excuses for the referee’s poor performance.