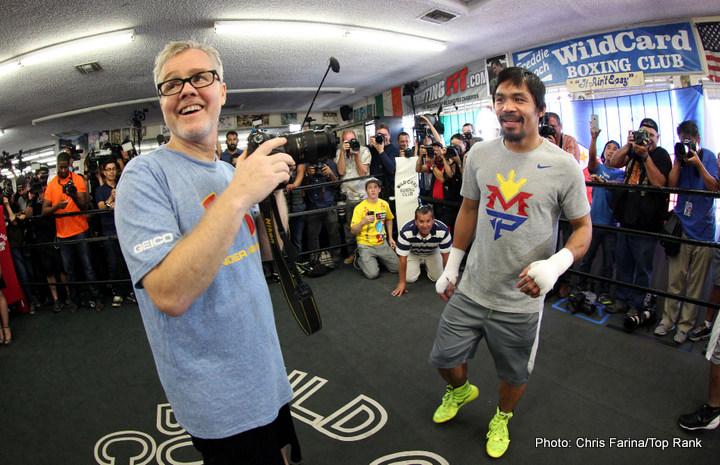 It would seem that the consensus among fight fans is that Manny Pacquiao is going to be up against it when he steps between the ropes to fight Floyd Mayweather on Saturday, and trainer Freddie Roach is determined to ensure there are no unfair advantages, telling Mlive.com that he want’s Floyd’s custom made Grant gloves checked thoroughly.

Roach said; “Grant is doing his gloves and they’re all custom (hand) made. I’d like to know what he’s putting in those gloves and what materials they are made with.”

“I’m a little concerned about the custom made gloves that Floyd’s going to wear.”

Pacquiao, who will wear his own trademark Reyes on fight night, has had his own glove issues in the past, most notably the first time he fought Erik Morales and dropped a close decision. That night he hadn’t been able to wear his choice of leather thanks to a contract clause he was unaware of, so Roach is adamant for the biggest fight of his man’s life, the gloves must be in order.

“Our gloves are made by machine in Mexico. They’re the same all the time. They’re very standard. Top Rank have a warehouse full of them. They’ll grab ten pairs and we will pick our gloves from one of the ten.”

As Floyd Mayweather Snr enjoys doing with Roach also, the veteran trainer couldn’t resist his own barbs about the “Mayweather hands and puching power”. He said;

“I’m a little bit worried about the weight of the gloves (on PBF) and the padding because I know Floyd has a little bit of fragile hands. It’s something that runs in the family. I do think they can all punch really well but they do have small hands.”

Floyd too has had own issues in the past with the gloves of opponents, famously objecting to the EverlastMX custom gloves Marcos Maidana wore the first time they fought.

Maidana changed the gloves, as Mayweather thought them not padded enough and threatened to scrap the fight.

Luckily Roach will have his chance to inspect the gloves on Friday night at the MGM Grand. As will the Mayweather team. At this level, EVERYTHING can present an advantage, no matter how small.

Days out from the fight itself, both camps are determined not to concede a thing.