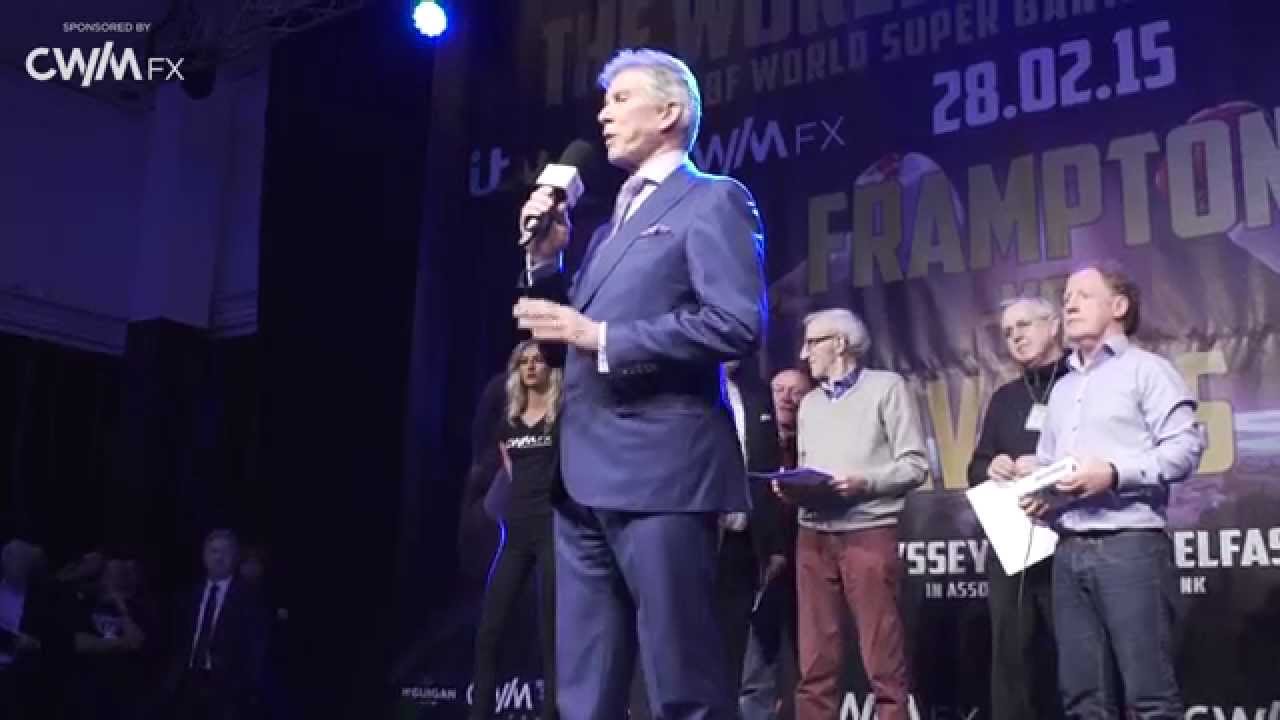 This Saturday afternoon, February 28, Carl Frampton (19-0, 13 KO’s) will make the 1st defense of the IBF Super Bantamweight title when he takes on mandatory challenger Chris Avalos (25-2, 19 KO’s) in a bout that can be seen live and exclusively in the United States on AWE–A Wealth of Entertainment.

The show begins on AWE at 3:00 PM ET / 12:00 PT The card will originate from the Odyssey Arena in Belfast, Northern Ireland and is promoted by Cyclone Promotions

Frampton will be fighting in front of his hometown fans knows that he needs a big effort over the tough Avalos in order to secure major fights in the suddenly hot 122-pound division.

“Everything is good. My weight is good. I have had great sparring, a great camp and I am ready to go. The atmosphere at the Odyssey Arena is always unbelievable and it will be even more on Saturday,” said Frampton.

The undefeated Frampton did not need theatrics by Avalos’ camp at Thursday’s press conference to get him mentally ready for Saturday’s showdown.

“I am always motivated and they did not have to do that to get me in the zone. I just shrugged it off and I am completely chill.”

Frampton has long been rumored to have an all United Kingdom showdown with Scott Quigg, but he knows that he has a huge task in front of him on Saturday.

“I actually think Avalos is better than Quigg. He is dangerous, a better puncher, a better chin and he hits harder. I know I have to win as there are big fights in my future.”

Frampton also agrees to the theory that once a fighter wins a title he becomes a better fighter.

“Since I won the title, I am walking taller. I have been running through sparring partners and I can see that I am a more complete fighter. If Chris doesn’t believe that, we will see what happens.”

“I want to be exciting and I want the knockout. I want to fight the big fights. I want to fight everyone at Super Bantamweight. I can see myself fighting Quigg this summer then I want to fight Rigondeaux. I see him as the man to beat at this weight class. Another guy is Leo Santa Cruz but I do not think he will fight anybody of note.”

Boxing fans can enjoy this amazing card on AWE available on AT&T U-Verse, ch 147 and 1147 in HD, Verizon FiOS TV, ch 169 and 669 in HD, CenturyLink Prism TV channel 470 and 1470 and numerous regional cable providers across the nation. Please check www.awetv.com for boxing updates.

Avalos sounded like a champion on Wednesday when he was reached after his media workout in Belfast.

“Everything is good. I could fight tonight, tomorrow it doesn’t matter because I am ready to go,” said the native of Lancaster, California. “I have been thinking about the gameplan and what I am going to do.”

Avalos is not in the least intimidated by what will be for sure a raucous and partisan crowd that will be inside the arena on Saturday.

“The only thing that matters is me and the fighter in front of me. The rest doesn’t matter. In fact his fans will become my fans. I did not come all the way here to lose. I know he is undefeated but he has not fought anybody like me. I do not see anything special about him.”

For the better part of the last few years, Frampton has been eyeing a mega fight showdown with WBA Interim champion Scott Quigg and Avalos believes that Frampton is making a big mistake if he is not focused on the American.

“I am glad he is looking past me. I am coming to his hometown and he is underestimating me and that will make my victory on Saturday even more sweet. I will be the next IBF Super Bantamweight champion.”

“The Frampton vs Avalos world title fight is a classic matchup which will provide tremendous excitement for viewers. I look forward to Avalos bringing the title back with him,” said Hall of Fame promoter Bob Arum exclusively to AWE.

Boxing fans can enjoy this amazing card on AWE available on AT&T U-Verse, ch 147 and 1147 in HD, Verizon FiOS TV, ch 169 and 669 in HD, CenturyLink Prism TV channel 470 and 1470 and numerous regional cable providers across the nation. Please check www.awetv.com for boxing updates.

AWE LIVE Boxing features live world title championship and elimination bouts showcasing today’s most exciting fighters. Since the inception of AWE’s live boxing events in 2011, AWE has earned multiple Boxing Writers Association of America nominations for “Fight of the Year” and has featured over thirty world class boxing events. In 2013, AWE showcased all live bouts featuring heavyweight David Price. AWE aired live the stunning upsets of Tony Thompson over David Price, along with Adonis Stevenson and Tony Bellew cards, who fought each other for the light Heavyweight championship; 2008 Olympic Gold Medal winner James DeGale. AWE brought boxing fans two of the most controversial bouts which saw Ricky Burns keep his Lightweight title against Ray Beltran. AWE fans have witnessed the explosive power of undefeated heavyweight Tyson Fury multiple times on the network, including Fury’s victory over Kevin Johnson. In 2014, AWE televised the crowning of lightweight champion Terence Crawford with his win over Burns as well as the exciting rematches between Carl Frampton and Kiko Martinez as well as Tony Bellew defeating Nathan Cleverly.

About AWE – A Wealth of Entertainment

A Wealth of Entertainment (“AWE”) features a wide range of lifestyles and entertainment programming from exotic travel and outrageous homes to live world championship boxing. AWE is featured on over a hundred cable providers, including AT&T U-Verse, ch 147 and 1147 in HD, Verizon FiOS TV, ch 169 and 669 in HD and CenturyLink Prism TV channel 470 and 1470. For more information, please visit www.awetv.com.