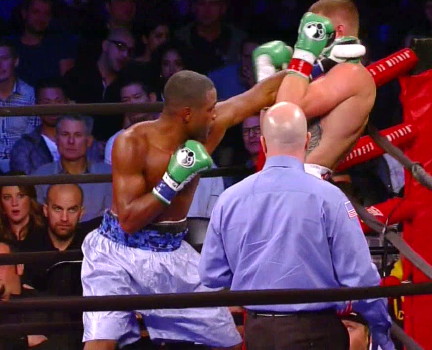 If you were wondering why #6 WBC light heavyweight contender Andrzej Fonfara (26-3, 15 KOs) looked so poor last night in defeating Doudou Ngumbu (33-6, 12 KOs), you have to realize that Fonfara suffered an injury to his right hand in the 4th round of the fight, according to Fightnews.com. From that point on, Fonfara was pretty much stuck using his left hand to do most of his power punching.

Fonfara won the fight by a 10 round unanimous decision by the scores of 98-92, 97-93 and 97-93. Of course, the injury Fonfara sustained doesn’t explain why he looked so bad in the first three rounds of the fight.

That’s something that you have to wonder about because Ngumbu was able to hit Fonfara nearly at will with his power shots, and it was kind of disappointing to see something like that happening when Fonfara had previously been hyped by a lot of boxing fans.

“I think about [Adonis] Stevenson every day,” Fonfara said. “I think I need one more fight before I get a rematch with him. My defense was better in this fight, but I need to throw more punches and combos to become a complete fighter.”

Fonfara’s defense wasn’t anything to shout about, as he was hit pretty much with almost everything Ngumbu threw at him last night. Right now, based on how Fonfara looked last night, I don’t know that it would make any difference if he were to fight Adonis Stevenson again.

Fonfara looked little improved since his loss to Stevenson earlier this year, and I can’t see there being any difference at all if they were to fight each other again.

What Fonfara needs to do is to try and prove himself against one of the good contenders like Artur Beterbiev so that boxing fans don’t waste their time watching another mismatch between Fonfara and Stevenson.

If Fonfara wants to show that he’s improved, then he needs to face Beterbiev and show that he deserves another fight against Stevenson, because fighting a little known 2nd tier guy like Ngumbu proved nothing. It just proved that Fonfara could plod his way to a 10 round decision while looking poor.