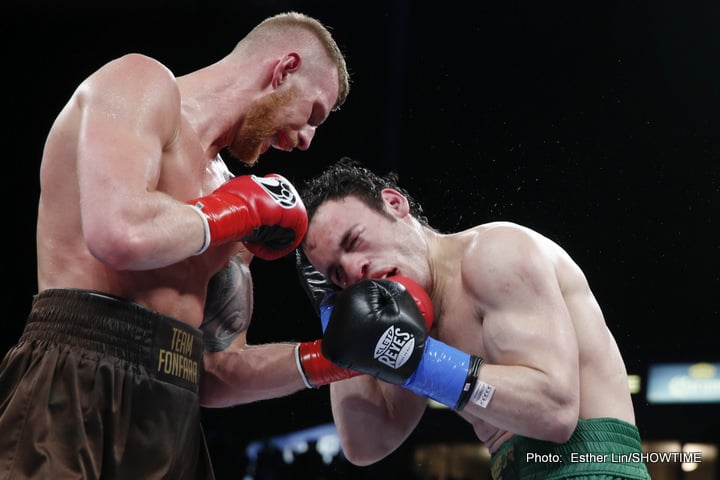 The fighters faced-off at the Holiday Inn Chicago Mart Plaza and spoke with media about their upcoming primetime bouts. Here is what the fighters had to say Thursday:

“I want to thank everyone who brought this show to Chicago. I’m ready. We’ve had a very long camp. I’ve had great sparring after traveling two weeks in Big Bear and three weeks in Houston. The rest of our camp was in Chicago and it was outstanding.

“I’m ready for this opportunity. Joe Smith is a young guy who is here to beat me. I have to show him I’m a better fighter in the ring. What we say now doesn’t matter, we’ll see everything on Saturday night.

“I’ve been in a lot of fights, I’ve been the favorite and I’ve been the underdog. I know this is a big fight for Joe Smith and that he’s trained very hard. He is going to be very motivated but I will be too and I will be ready on fight night.

“Each fight is different. I can’t give him a lot of space to punch. I want to wear him down and finish him. I’m taking it round-by-round to get the win.

“I know he has a big punch, because he wins fights by knockout. But who has he knocked out? The guy who was a little bit better, Will Rosinsky, he went the distance. He has heavy, wide punches and we will be ready for him.”

“I’m very excited for this fight and opportunity. I’m here to prove myself to all those who think I shouldn’t be here. I’m taking the victory home. I want to prove it to the world.

“I’m amped up to get in the ring with a high quality fighter like Andrzej Fonfara and put on a show.

“Our styles are going to make for an exciting fight. I expect a war, but I’m prepared for anything. All I know is, I’m going to end the night with my hand raised.

“Ever fight I go into the ring with the same mentality. Everything is on the line and I want to prove myself to the world.”

“I have come very well prepared. I knew that Raushee was a tremendous fighter before our first fight and I’m looking forward to the rematch.

“I’ve had a great camp and I’m thinking very positively. I know at the end of the night I will have my hand raised in victory.

“I know Warren has to say that he thinks he won the fight and maybe he really does think that. It doesn’t affect me. That’s the reality of it. He can keep saying it, but it doesn’t matter.

“When I won the fight, I knew there would be some controversy. He was whining the second the fight ended. I’ll give him 10 rematches and it won’t change the result. There aren’t many elite 118-pounders out there, so who knows, we may fight again after this.

“I’m very experienced so I will not be bothered by the big stage. I’ve fought huge international opposition. We’re both warriors and we’ll be completely focused. At the end of the day I will win the fight and leave no more controversy.”

“I had a whole year to train to get ready for this. I want to let everyone know that I’m coming to take the title. I’m not playing around.

“I doubt it’s going 12 rounds. I want Payano to know that. I’m going out to get what I deserve. I feel like I won it the first time and I’m coming to take it home.

“I’ve adapted to the professional ranks. People like Adrien Broner and Lamont Peterson have helped me get to this level. I want to reach my peak. There is still work to be done. I have to go in there and pick my shots well and get the victory.”

“I want to give my condolences to everyone who lost loved ones in the Orlando shootings. Orlando is my hometown and I’m dedicating this fight to them.

“I’m excited about the opportunity to fight in Chicago and on this great stage. I’ve had a great training camp. I’m ready to light this city up like Michael Jordan.”

“It’s an honor to be on a card of this magnitude, there are a lot of great fighters here and it motivates me very much to be on this stage.

“I come very well prepared. I’m focused and ready to bring home a victory for all of Mexico.”

“I appreciate being here in Chicago. It’s a great opportunity and a great fight. We’re weeding out the middleweights and making it to the top. It’s the best fighting the best.

“We’re going to leave it all in the ring on Saturday and we’re ready to go. No excuses.”

“I’m very happy to fight in Chicago in front of all the Polish fans. I’m in very good shape. I’ve worked very hard with my coach and I’m ready.