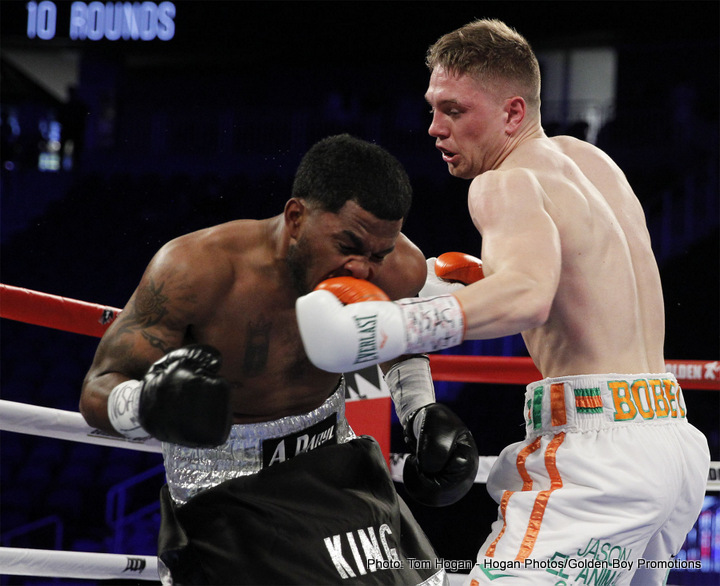 Unbeaten Irish prospect Jason Quigley made a big step towards becoming a contender with his last win, a May 7 points victory over the experienced James De La Rosa, and now the former amateur standout has a, the sky’s the limit attitude. Quigley may be just 11-0 as a pro, but he says in an interview with The Irish News that he already has superstars such as Gennady Golovkin and Saul Alvarez on his radar.

Quigley, signed with Golden Boy and Sheer Sports, acknowledges how he needs more experience and that he is in no rush, but he is already dreaming of the big, big fights – a super dream fight with GGG in Ireland especially.

“We are looking to bring big-time boxing back to Ireland – my dream venue would be Croke Park. Me and Golovkin at Croke Park would be amazing,” he said. “It’s what dreams are made of and I plan on making my dreams come true so it’s definitely going to be a possibility. Golovkin and Canelo are the world champions and I’m a prospect on the way up so these are the guys that I’m looking at. I turned professional to become the best that I possibly can and get all the belts that are out there. Golovkin is the best out there and I definitely have him on my radar because he has what I want, he has the belts. Whoever has the belts is the guy I’ll be after – they have what I want and I’m coming for them.”

Quigley is a genuine talent who has many good judges excited. How far can he go? It’s still too early to tell but with a few more wins over solid opposition like De La Rosa, we soon have a good idea. Quigley is still only 25 and he wants more fights this year, another two ideally; before taking a big fight in Ireland next year. Will GGG still be the top dog at middleweight by the time Quigley gets where he is aiming to go?

Quigley has to be commended for aiming as high as he is. GGG seems to be fast running out of quality challengers and maybe a new batch of talented young fighters is needed for the middleweight division. Right now, Quigley has to be looked at as one of the most promising young middleweights on the way up.