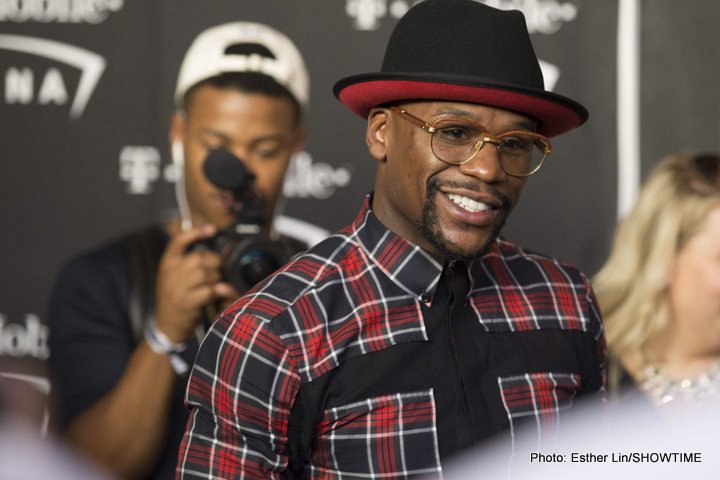 A news story is currently doing the rounds, with suggestions again rife that Floyd Mayweather will soon be fighting again in one form or another. Spar-mate Denis Douglan spoke via Vegas Insider and he revealed how he and “Money” met for a 2 a.m spar session some time over the summer. Douglin, who served as Floyd’s main sparring partner for the Conor McGregor fight of three years ago, says Mayweather, even at age 43, is still “100 percent capable of hanging with the top guys” – Errol Spence included.

Douglin says after three rounds of sparring with Mayweather, Floyd told him there would be no bell, that the fourth round would continue “until you quit.” Douglin says that fourth round resulted in something like “30 minutes” of hard work. Douglin says it was indeed hard sparring all the way.

“I landed on him and it was very good sparring,” Douglin said. “The people that were there were saying we’ve never seen someone pushing Floyd that much. One hundred percent – I think he could come back. The last time we sparred, I kind of felt like he was slowing down a little bit. This time he felt sharp, he felt strong, his stamina was great. It was almost like he’s getting better. I think he could still hang with the top guys. There’s no reason to try because he’s already proven himself, but if he wanted to, he could still do it. With Errol Spence at his best, Floyd can still compete with him 100 percent.”

Of course, just because Mayweather – a notorious gym rat – has been sparring again, it doesn’t mean he will fight again. It seems more likely Mayweather will engage in another high paying exhibition bout of some kind. Still, for as long as he’s on peoples’ minds, there will be talk of yet another Floyd Mayweather comeback. And it is interesting that Douglin says the sparring was so intense and that Floyd was so sharp and strong.

Just maybe Mayweather has still got some seriously competitive juice inside him. Imagine how massive a “real” fight involving Mayweather would be. 51-0, anyone? Or maybe 50-1?