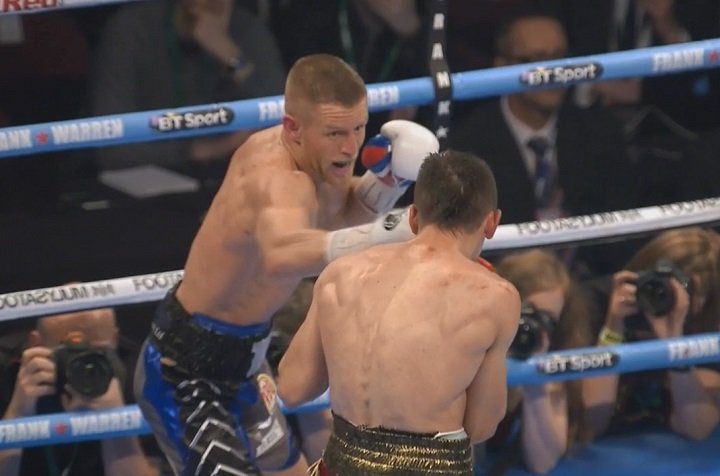 In an example of very generous scoring, World Boxing Organization lightweight title holder Terry Flanagan (33-0, 13 KOs) held onto his title in defeating the much tougher than expected Petr Petrov (38-5-2, 19 KOs) by a 12 round unanimous decision on Saturday night at the Manchester Arena in Manchester, England.

There’s no question that Flanagan won the fight, but the scores handed down by the judges were somewhat ridiculous in how wide they were slanted in his favor. The judges scored the fight 116-112, 120-108, 118-110. The judge that gave Flanagan every round of the fight must have watched a different fight, because it was not that kind of a contest. Flanagan definitely lost round. He looked uncomfortable with the speed, movement, accuracy and the overall fighting style of the Russian Petrov.

The best you can say about Flanagan is he outworked Petrov in enough of the rounds to get the win, but it wasn’t a one-sided victory. Petrov fought well enough to deserve 4 rounds at the least. Petrov exposed Flanagan as being a less than solid champion. After this performance, Flanagan should probably stay away from the likes of Vasyl Lomachenko, Mikey Garcia and Jorge Linares.

Petrov fought well throughout the fight. He let his foot off the gas in the 12th and go outworked and that was a crucial round. Well, with the way this set of judges scored it, the round wasn’t crucial.

Liam Smith (25-1-1, 14 KOs) had a miracle happen on Saturday night with his opponent Liam Smith (16-1-1, 11 KOs) suffering a bad cut over his right eye in the 9th round, causing the fight to be stopped after the round and giving him the win by a 9th round TKO. The vacant interim WBO junior middleweight title remains vacant with this fight despite Smith winning. He had missed weight on Friday at the weigh-in, so he had no chance of winning the WBO interim strap.

Smith was losing the fight at the time the match was stopped. All three of the judges had him trailing on the scorecards. Boxing 247 had Williams well out front 6 rounds to 3 at the time the fight was stopped. Smith had done precious little in the fight. Williams was faster, more powerful, and the better fighter through most of the contest until he had to bow out after suffering a terrible cut to his right eyelid. The area of the cut made it impossible for the fight to be allowed to continue. It was a deep cut in an area where there was no possible way that they were going to be able to stop the bleeding.

Smith was over his right eye in the 3rd. It was a really bad one too, but it wasn’t a cut in the eyelid like Williams.

There could be a rematch between Smith and Williams. Perhaps the interim WBO junior middleweight title will be on the line once again. Williams looked very good until suffering the cut. Williams’ performance against Smith causes Saul Canelo Alvarez’s stock to drop off. Williams arguably did a better job dominating Smith than the redheaded Mexican star. Williams dominated Smith the entire fight, not just in the second half of the contest like Canelo did.
Other results: