If you haven’t yet heard the name Nick Ball, you soon will. If you have not yet seen Nick Ball fight, you should do so as soon as you can. An explosively exciting, 5’5” buzz-saw of a featherweight, the 25 year old from Liverpool is fast honing in on the big names, on the big fights. Last night at York Hall in Bethnal Green, Ball faced Mexico’s Jesus Ramirez Rubio in what was looked at by a number of good judges as a potentially hard night’s work.

Instead, Ball, looking as he is in each fight to get the knockout or stoppage, did just that inside the opening session. Three times Ball dropped 26 year old Rubio, a man who had been stopped just once and who had not lost since June of 2017. Ball, with his fast feet and his even faster hands, used his left hook to good effect. Rubio – a replacement for Panama’s unbeaten Rafael Pedroza – gamely got back up after all three knockdowns, with the referee finally deciding to dive in and halt matters. The fight was over after 108 seconds. Ball is now 17-0(10). Rubio falls to 20-2-3(14). Ball retained his WBC silver belt. 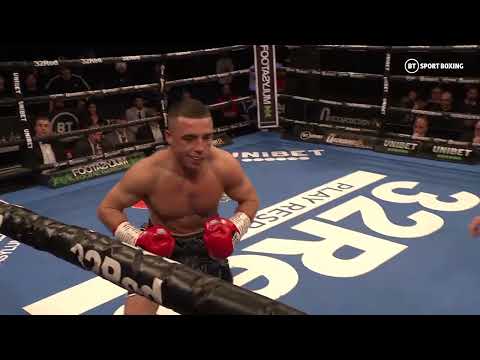 Ball, who made a name for himself back in April when he upset Isaac Lowe, was not in with a killer last night, but not too many people were expecting such a quick win from him. Ball really is seeing his fanbase grow and it’s down to his constantly thrilling, mile-a-minute style and approach. Ball says next year will be a big year for him and that come the end of it he will be ready for “whoever has a title.” As in a world title.

Currently, the featherweight division is buzzing in the UK, with the likes of Leigh Wood, Josh Warrington and Michael Conlan all giving us exciting fights. Ball against either of these guys would be something to see. Wood and Warrington each currently hold a world title, so Ball could well be gunning for them next year. Ball at this stage may need a good deal of further experience, and additional rounds never hurt of course, but he does look like a future world champion. And maybe a big star.

Thus far in his career, Ball has done nothing wrong. A hard worker in the gym, Ball has speed, power, fitness and a ton of desire not only to win but to excite the fans. In short, there is nothing to dislike about Ball. Ball fought three times this year, winning each bout by stoppage. 2023 really could prove to be his big breakout year.