Ryan Garcia is confident he’ll be able to put together a fight with WBA lightweight champion Gervonta ‘Tank’ Davis for the first half of 2021.

King Ryan (21-0, 18 KOs) says he won’t be an obstacle to getting the match done with Tank (24-0, 23 KOs) because he wants this fight more than anything. Ryan targeted Tank years ago, and only now he’s finally in the position to fight him, as long as he doesn’t back out.

Ryan, 22, needs a win over Davis to increase his popularity with the hardcore boxing fans, many of which still view him as an Instagram boxer despite his recent seventh-round knockout victory over Luke Campbell on January 2nd.

What took away the shine from Ryan’s win over the two-time world title challenger Campbell (20-4, 16 KOs) was getting knocked down by him in the second round.

Ryan Garcia Says He'll Retire From The Ring At 26, Then Fight In MMA

Campbell, 33, isn’t known for his power, and that’s why it looked odd seeing him bowl Ryan over with a straight left.

“I trust his word, and I hope this fight gets made for the fans,” said Ryan Garcia to the Pug and Copp Show in talking about Tank Davis.

“I’m not taking any shot at any organization,” said Ryan about the sanctioning bodies. “But they messed up, and they need to be held accountable.

“There are too many belts. The word ‘champion’ should mean the best in the division. You’ve beaten the guys that you need to beat. So honestly, I don’t like that they’re doing this.

“There are too many belts in the game, and we all know that. How can people know who is the champion?” said Ryan.

Unfortunately, the casual boxing fans don’t know who the champions are because there are too many belt-holders. You hate to point out weak champions, but there sure are a lot.

The way that the four sanctioning bodies [IBF, WBA, WBC, and WBO] have watered down the sport of boxing with their many titles, it’s taken away the meaning of being a world champion.

That’s one of the reasons why Ryan Garcia doesn’t care about becoming a world champion as much as facing the best. In the case of Gervonta Davis and Teofimo Lopez, those two are legitimate champions.

Ryan isn’t saying what his solution to the problems of saturation of world titles, but one way of disempowering the sanctioning bodies are for fighters like King Ryan to refuse to accept their titles after he beats a world champion like Tank Davis.

Ryan would be leading by example, and we might see other fighters following him. The real solution would be for a new sanctioning body to be created that all the best fighters agree to focus on just that one and not the other governing bodies.

“But don’t worry, I’m coming for you. You better defend that title against Devin because I’m coming straight for you, and if you don’t keep that title, you better sleep with it at night.

“You better take care of that title for me. You better shine it up because I need it clean by the time it gets to me.

“I need it all clean and nice and pretty. I want to see my reflection when you give it to me. I kind of want to beat him for free.

“Stop trying to pick fights that you know your style is good for. I know what you guys are trying to do.

“Luckily for me, I’ve studied every style. You guys don’t know about me,” said Garcia.

Teofimo Lopez’s promoter Bob Arum would need to be on board with him facing Ryan, and that’s not going to happen right now.

Arum wants Ryan to fight his IBF mandatory George Kambosos because of the money he can make by fighting him in his native Australia in front of a large crowd.

After that, it’s going to be a race against time for fighters like Ryan Garcia, Tank Davis, and Devin Haney to face Teofimo before he moves up to 140 at the end of 2021.

“I don’t know,” said Ryan when asked if he thinks Gervonta is working as hard as him.

“I know his pride got touched a little bit. I got under his skin. I look back at that video and I feel kind of bad.

“I don’t think I should have gone after his height. I know it was to excite people. Like now, he can’t change that, so why would I hit him with it.

“He can’t do anything about that. Gervonta, what I want to say is, even if you were my height, you wouldn’t beat me.

“Campbell was tall like me, and there were no advantages. You’re not going to beat me, Gervonta. That’s all I got to say.

“You ain’t going to beat me, and I think I’m going to knock you out in two rounds. Let’s see what you can do, and let’s get it on,” said Garcia.

Gervonta Davis is fighting on another level right now, and he’s going to be very hard for Ryan to beat.

Unless Ryan catches Tank with the perfect left hook to knock him out, Tank is going to catch him with a big shot eventually.

Ryan should be focusing on getting Tank’s promoters at Mayweather Promotions to negotiate a fight with him because it’s not a given that he does.

Ryan will let fans know if Tank backs out

“Trust me; I’m not naive. I will train for a 12-round fight,” Garcia said. “This is all to get the fans excited, and that’s what I want to make clear,” said Ryan about his second-round knockout prediction he’s been making.

“If I make a mistake, are you guys going to chastise me for that? I’m giving my soul to this game. I’m retired of these fans not respecting.

“What do you want? Do you want me to take my time or fight the fight? That’s why I’m going to do what I want and want most people want.

“With the Campbell fight, you heard me say, ‘Yes, yes, yes and yes.’ That’s how I made the fight happen.

“If he somehow doesn’t accept the fight for whatever reason, I will first let everyone know he didn’t. I will make it very, very clear why it didn’t happen.

“So you better be ready for that. After that, whoever wants to get in the ring, I’m ready. I don’t care.

“I hope Devin and Teofimo get in the ring and fight each other so I can fight the winner.

“I don’t see this fight [with Tank] Davis not getting made because I’m ready to do whatever it takes. But for whatever reason, we’ll see where life takes it,” said Ryan.

I don’t know why Tank would back out from this fight with King Ryan because this is easy money on paper. Tank has the experience, the power, and the foot speed to deal Ryan his first career defeat.

The money alone that Tank will make for the fight makes it unlikely that he or his promoters at Mayweather Promotions will pass on it.

“Oscar, it feels good to finally have him believe in me,” said Ryan about his promoter Oscar De La Hoya. “I felt like Bernard [Hopkins] believed in me, but I haven’t always felt like Oscar did.

I felt like he wanted to, he seen it, but now he does. I’m not mad at him. I don’t hold grudges.

“As long as he treats me fair and right, I’m cool. I’m in it to make the biggest fights happen and to have a great team around me. If Oscar wants to be a part of that, show me.

“There was one clinch. I punched myself out in the first 30 seconds,” said Ryan about his fight with Luke Campbell.

De La Hoya has to believe in Ryan Garcia after his victory over Campbell.

With that said, De La Hoya will have some doubts about whether he can get the job done against fighters like Tank Davis, Teofimo Lopez, and Devin Haney.

De La Hoya has to have some doubts because Ryan’s opposition is nowhere near as good as Tank Davis.

“What I got most out of this was how much happiness this brought to the sport,” said Garcia. “You saw a real change from the perspective of the sport now. 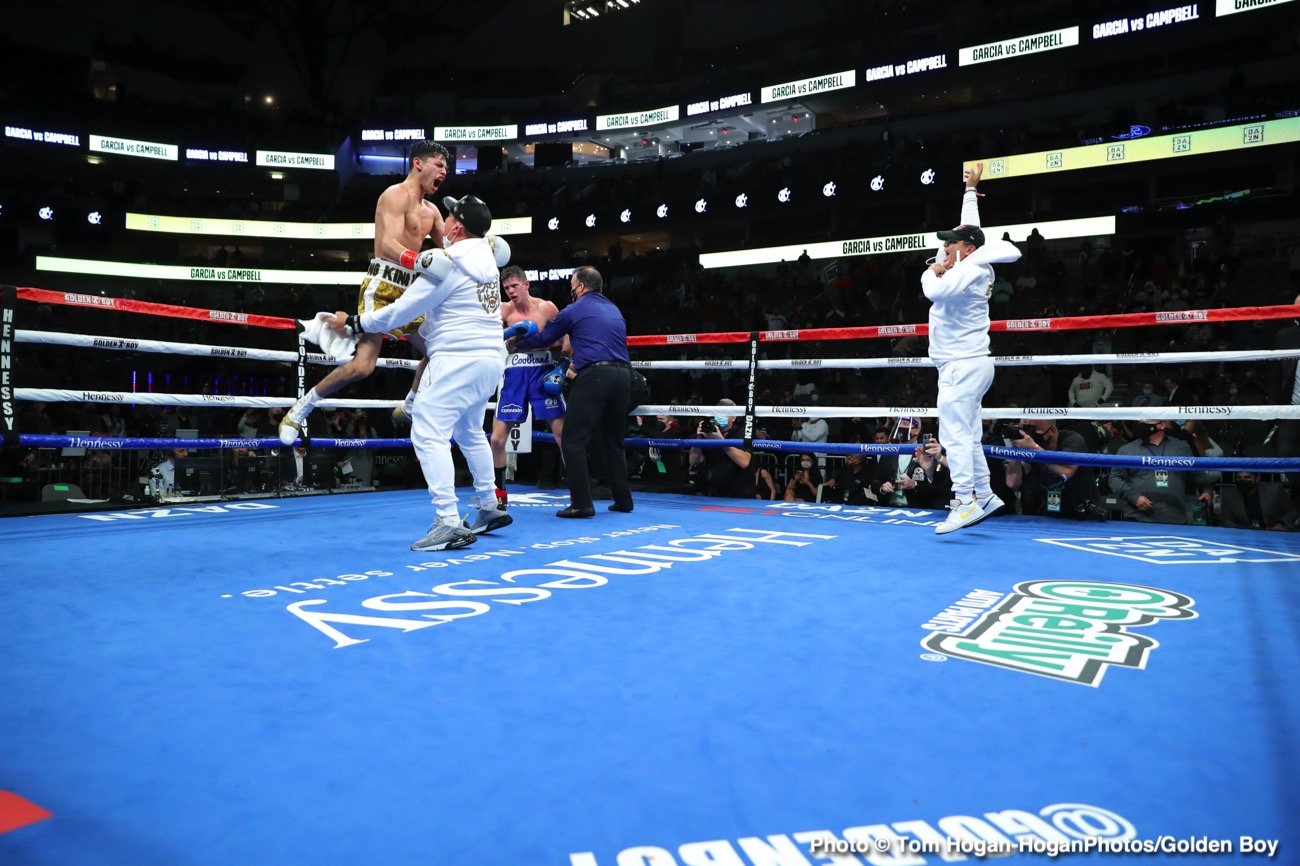 “It was just a little bit, but for some reason, it touched a lot of people’s hearts that day.

“I’m sad that I got dropped [in the second round], but I felt like I gave everybody hope. It kind of reminded them that life is going to knock you down.

“That spoke more than any words I can say. When you make a lot of money and gain a lot of fame, you lose a sense of the reality of where you came from, and you stop relating to those people where you used to be.

“So if I keep being honest, sharing my story, and be honest as I can. As long as I’m honest and truthful, it will touch their heart.

“That’s all I want to do, touch people’s hearts, be kind because I was in that position, and it’s not fun. I know what people are feeling because I’ve been there, I’ve seen it,” said Ryan Garcia.

Ryan’s win made some boxing fans happy, but the victory wasn’t good enough to make believers of the hardcore fans know that Luke Campbell isn’t a major talent.

If Campbell were the real deal, he wouldn’t have been beaten three times before he fought Ryan. It’s going to take a victory by Ryan over Gervonta to make believers of fans.