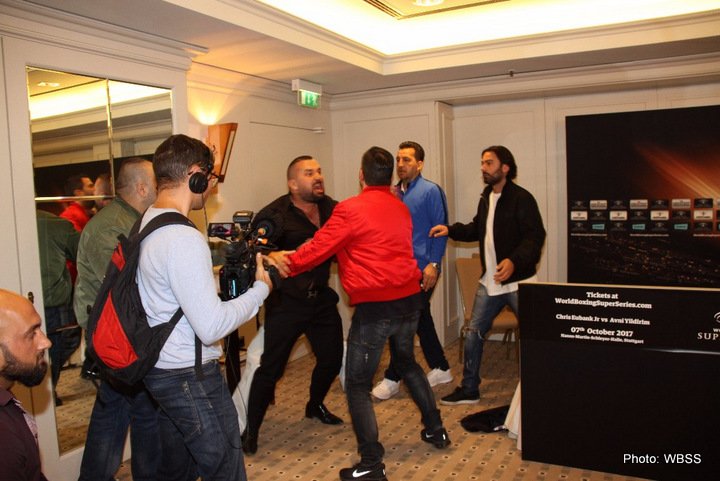 At the end of the press conference, things escalated when Yildirim’s manager Ahmet Öner was close to engaging himself in a fight with a member of Team Eubank Jr.

Chris Eubank Jr. set the tone for the press conference in his opening statement:

“The warship has landed fully equipped, fully loaded and all the artillery is pointing at Yildirim,” said the 28-year-old third seed in the Ali Trophy super-middleweight tournament.

“So you are coming with all your weapons,” said 26-year-old Avni Yildirim.

“Don’t forget the first world war when everybody was after the Turks and couldn’t do it. We are still here and everyone knows what Turkish soldiers are capable of. Turks are soldiers, war is in our DNA.”

“Eubank Jr. is right – this will be war. I hope he has enough weapons to stay 12 rounds. If you win I will be the first guy to respect you and shake your hand, but I do not see that happen.”

“One thing I do want to say. I have a lot of respect for the Turkish community, I have Turkish friends and I like Turkish food. This is a fight between two men. I advise Avni to take his focus of off stirring up a drama between two countries.”

“We are delighted to be in Stuttgart, a great fight town.”

“Eubank Jr. and Yildirim are both stars in their own rights in their countries. We will see a war between two gladiators, two outstanding athletes.”

The “Eubank Jr. vs. Yildirm” card, starting at 2 p.m. ET / 11 a.m. PT,keeps Canadian boxing fans at ringside during the entire $50-million WBSS tournament, live this weekend from Germany and exclusively on Super Channel, which acquired the rights in Canada to broadcast the World Boxing Super Series from MP & Silva, a leading international media company that provides media rights, digital, technology and sponsorship services.

In 2015, Eubank Jr. stopped Tony Jeter (20-4-1) in the second round to capture the Interim World Boxing Association (WBA) middleweight crown. Eubank Jr. captured his IBO title this past February, knocking out Renold Quinlan (11-0) in the 10th round. In his most recent action, the skilled Brit won a 12-round unanimous decision over multiple world champion Arthur Abraham (46-5) in his first and only world title defense to date.

I am very much looking forward to this fight. I think it is a great match-up. Styles make fights and the reason I picked this man at the Draft Gala is that he is a fighter. He comes forward. He is very active, he is very open, he takes risks, which he will pay for this fight. I can’t wait!

“I have a goal. I have a challenge that I have to complete and that is to win the Muhammad Ali Trophy and prove that I am the best in the world.”