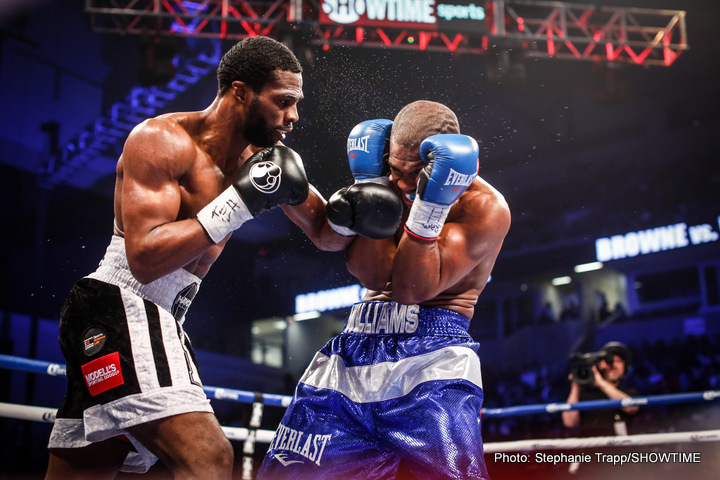 It’s been nothing but voluntary defenses for Stevenson ever since with him defending his WBC title successfully 6 times in beating these fighters: Andrzej Fonfara in 2 fights, Dmitry Sukhotskiy, Sakio Bika, Tommy Karpency and Thomas Williams Jr.

You can argue that it’s not a smart move for a contender to try and climb his way to a title shot against Stevenson, given how long it takes to get a title shot against him. Stevenson will be defending his WBC title against his current mandatory challenger Eleider Alvarez in 2018, which mean it would be 5 years since he last defended against a mandatory.

The question is will the winner of the Gvozdyk vs. Browne fight be willing to wait 5 years potentially for a fight against Stevenson? The WBC needs to be a little more on top of it to force mandatory defenses for their champions like Stevenson on annual basis instead of letting him defend every 5 years.

The 30-year-old Gvozdyk is a 2012 Olympic bronze medalist from Ukraine. Gvozdyk has looked good since turning pro in 2013. He’s beaten the likes of Craig Baker, Yunieski Gonzalez, Isaac Chilemba, Tommy Karpency and Nadjib Mohammedi. Gvozdyk has also looked vulnerable at times in getting dropped by southpaw Karpency in the 1t round in their fight last year on July 23. Gvozdyk was genuinely hurt, and he struggled until round 3. He took over the fight and boxed until stopping Karpency in the 6th.
Gvozdyk looks good, but I don’t think he would beat Stevenson if that fight happened right now. A fight against Browne is more up Gvozdyk’s ally. He would likely be considered the winner over the younger 26-year-old Browne.

Browne is a southpaw with a lot of talent. he seems to be getting better with each fight. He might have a better top end potential that Gvozdyk, is limited in terms of overall talent. Browne has the potential of being very good. Browne recently beat Sean Monaghan, Thomas Williams Jr. and Radivoje Kalajdzic. Browne was badly hurt and knocked down by Kalajdzic in the 6th round of their fight last year on April 16. Browne came back to defeat Kalajdzic by a controversial 8 round split decision. However, Browne has looked a lot better in his last 2 fights against Williams Jr. and Monaghan.