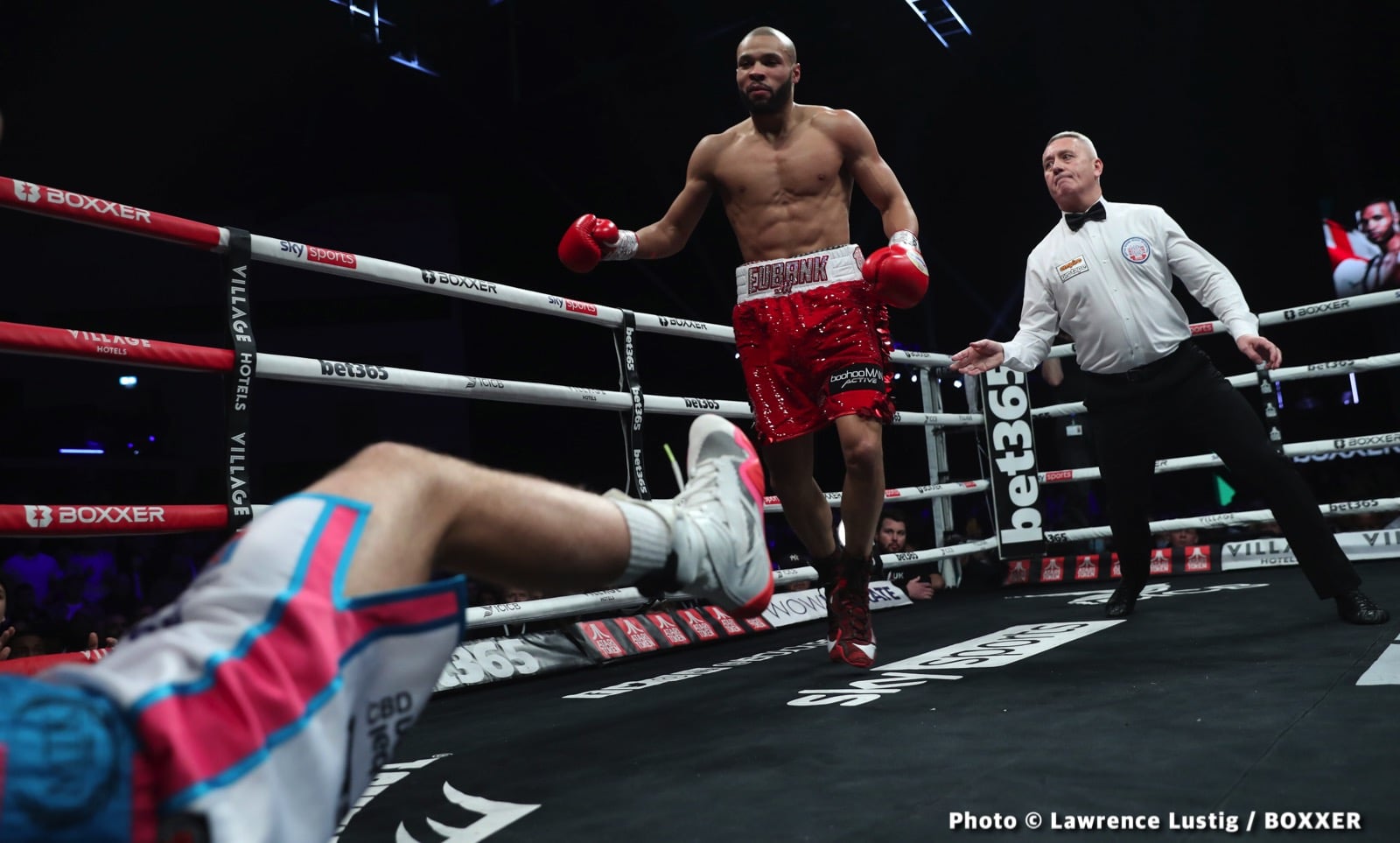 Former IBO super middleweight champion Chris Eubank Jr. (32-2, 23 KOs) defeated an overmatched Liam Williams (23-4-1, 18 KOs) in winning a 12 round unanimous decision in embarrassing the hometown fighter in front of his own fans at the Motorpoint Arena in Cardiff, Wales.

The only reason the scores weren’t wider is that Eubank Jr gassed out in the second half of the fight, and gave away some rounds.

Eubank Jr. was too good for Williams, and it’s not surprising he’s a true world-class fighter.

Boxing 247 will be giving live updates of the results below from Cardiff.

Does Eubank Jr. still have it?

“Liam Williams looks in fabulous condition. I spoke to him up there, and he’s absolutely ready to rumble,” said Adam Smith of Sky Sports to Boxing Social on the Eubank Jr. fight tonight.

“It means a huge amount to him. It’s a world title here, even though it’s not a world championship on the line.  He wants to beat Chris Eubank Jr badly. it’s burning inside him.

“But Chris looks cool and relaxed and he’s in tip-top condition as always. Mentally & physically, he’s absolutely there. Roy Jones Jr is very confident, they’ve spent a lot of time together, and he believes we’ll see a career-defining performance from Chris.

“Chris is always the consummate pro, isn’t he? Liam, there was a lot of talk this week about whether he’d struggle at the weight, but I think he looks really strong. The talking is over. There is grudge, there is needle, but it’s going to come down to which of them implement their tactics better.

Eubank-Williams to fight for world title in 2022

“They’re the best middleweights we have in this country. The winner goes on to fight for a world championship. There’s no doubt about that this year. So, Chris Eubank Jr. has all the star qualities, but can he put the big, big performance in that his career needs at the age of 32?

“As for Liam Williams, I think he believes he’s campaigned in a higher class. He feels very confident that Chris is underestimating him and he’s got a point to prove.

“It’s great when you don’t know who is going to win a fight. It’s 50-50,” said Smith on his belief that Eubank Jr. vs. Williams is a toss-up fight. “Boxing is never simple. There’s always a lot of high tension at these affairs.

“The most important thing is the fighters have behaved themselves impeccably all week. I think that was a worry and a concern,” said Smith.

“It’s just about learning those basic skills that got me to that situation, and with those things being taught, he can become one of the best ever,” said Jones Jr. about Eubank Jr.

“When I get back with him again, he’ll be far better than what I taught him than what I last saw him. Not too many people can do that,” said Jones.

Eubank Jr, 32, takes on the tough heavy-handed Williams in the headliner on Sky Sports. In the co-feature bout, Clarissa Shields takes on Ema Kozin in a fight that is expected to be highly entertaining.

This is a make-or-break fight for Eubank Jr, who has hopes of taking on the winner of the unification fight between WBA middleweight champion Ryota Murata and IBF champion Gennadiy Golovkin.