This is an excellent fight pitting #1  WBC Lubin battling #4 Fundora in a fight that will put the winner in a position to face the winner of next month’s May 14th rematch between 154-lb champions Jermell Charlo and Brian Castano.

The tall 6’5 1/2″ Fundora will be looking to make a name for himself by beating the 26-year-old Lubin, who has won his last six fights since losing to Jermell by a first-round knockout in 2017.

This would be a major career breakthrough for Fundora if he were to pull off the upset against Lubin.

Fundora hasn’t beaten anyone near the level of Lubin, but it doesn’t matter. Lubin hasn’t mixed up with anyone nearly as tall as Fundora.

The 29-year-old Spain native Garcia is coming off a  12 round unanimous decision loss to Fundora last December.

Harrison, 31, is trying to pick up his first win since his upset  12 round unanimous decision victory over  Jermell in December 2018. In his rematch with Charlo in December 2019, Harrison was stopped in the 11th round.

In his last fight, Harrison fought to a 12 round draw against Bryant Perrella in April of last year. Fighting once a year obviously isn’t going to help Harrison get back his lost WBC title, but that’s how he wants to run his career.

“We don want to make these fights close. We want to show the fans that these fights are a one-sided a**whopping,” said Erickson Lubin to Punsh Drunk Boxing.

“I think everything is going to work for me. Body shots, headshots.  To me,  his height doesn’t mean much to me. Everybody is fascinated by his height and how aggressive he is.

“Tome, skills pay the bills. If you want to beat somebody like me, you’ve got to show that you’ve got the skills. The height, that’s just more body.

“The bigger you are the harder you fall.  I’m not intimidated by no height. He’s a good fighter, he comes in shape, and he has a nice sneaky uppercut.

“That’s another good fight that I’m excited for as a boxing fan,” said Lubin about the Jermell vs. Brian Castano rematch on May  14th. “The first fight was really good between Brian Castano and Jermell Charlo.

“I think Brian Castano is pretty one-dimensional, and he has to make it a rugged fight against Jermell Charlo. Charlo is way more athletic than him. I don’t think he can box with Charlo like that.

“IthinkCharlocan mix up his game and come back with a different game plan and adjust a lot better than Brian can. So I think Charlo can take this one and I’m excited about that.

“I think Charlo is going to take it, and then I’m going to handle my business on April 9, and then we’ll get to negotiate. I had just turned 22 a week before that,” said Lubin about his age when he fought Jermell in 2017.

“I learned from it and I got better from it, and that’s what’s important. I faced adversity at a young age, and I come back blazing,” said Lubin. 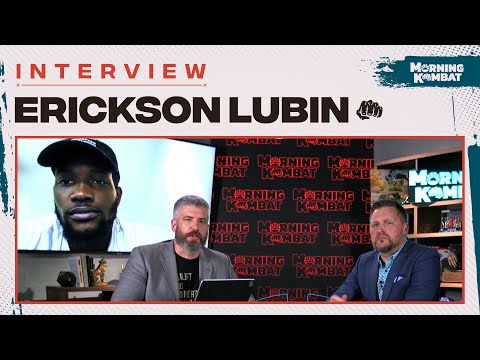