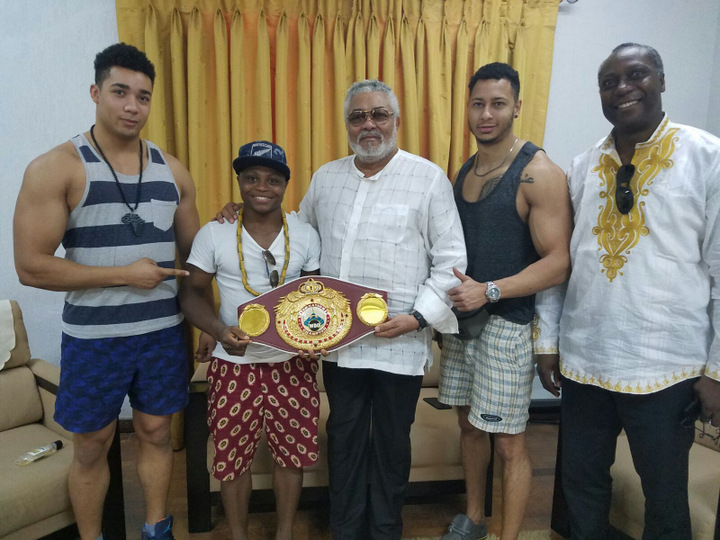 Former Ghana president, Jerry Rawlings has urged undefeated boxer, Isaac ‘Royal Storm’ Dogboe (16-0, 10 KOs) to follow in the footsteps of the legendary Azumah Nelson by setting his own standards and targets in order to become a great champion.

Despite rising to number five in the latest WBO junior featherweight ratings and with a chance of taking a shot at the world champion, Jesse Magdaleno, Dogboe has instead chosen to fight once or twice more before stepping up to the big plate and it’s a decision that the former president rates highly.

Mr. Rawlings who as he did with Azumah back in the day, has personally mentored and supported 22 year old Dogboe with advices and even financially, was speaking when Dogboe and some of his cousins from Germany paid a courtesy call to present the WBO International Super Bantamweight title he won last month in New Zealand.

The former Ghanaian leader said limiting one’s self to the standards of the world does not usually result in great achievements and reiterated as a move in the right direction, the decision by Team Dogboe to temporarily hold on to the world title dream.

“It’s not over, you’ve got a long way to go. Winning the world title may not be that far away but holding on to it for as long as possible is the ultimate challenge and that’s where you may need something from me, from the heart, from within,” Mr. Rawlings cautioned young Dogboe.

“There is something I noticed about Azumah that whenever he was alone, he goes to fight in the opponent’s territory, the whole stadium will be packed against him. Whilst other people derive strength from the other way round, he derives strength from being alone and that is what I refer to as setting your own standards,” Flt. Lt. Rawlings explained.

“Not many people set their own standards by the way, a lot of us allow the environment to set standards for us, that’s something I didn’t accept. I didn’t think some of the standards I ran into were good enough for me so I used to set my own standards, that’s the way it has to be,” Jerry Rawlings advised.