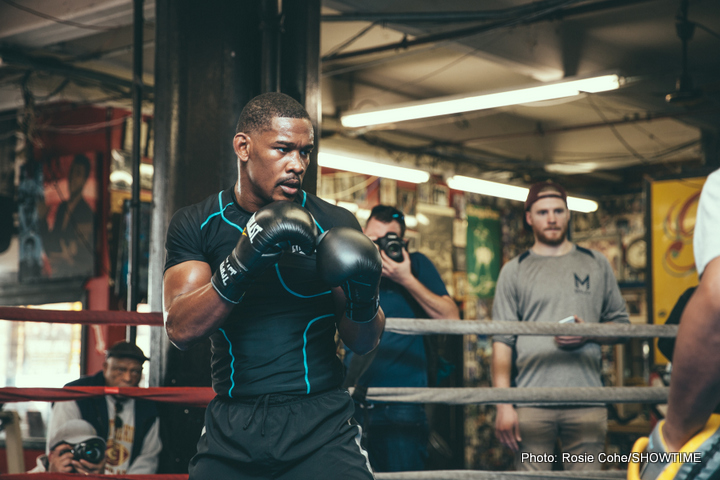 As expected, Danny Jacobs is pushing himself to the absolute limit as he gets ready to challenge unified middleweight king Gennady Golovkin in March. Jacobs has began his 10 week training camp and, in what must have proven quite costly, “The Miracle Man” has brought in three world class fighters as sparring partners – the three Russian fighters all being legit middleweight contenders in their own right.

According to a piece on RingTV.com, Keith Connolly, who advises all three Russian fighters – Avtandil Khurtsidze, Sergiy Derevyanchenko and Ievgen Khytrov along with Jacobs himself – explains how the the idea is that the once-beaten Jacobs will be able to get ready for Golovkin’s style and fighting approach as the three fighters emulate him in sparring.

“We think they can emulate Golovkin’s style better than anybodty out there,” Connolly told Ring. They’re from the Russian system and they’re all top middleweights. Besides Danny and GGG, I don’t think there’s anyone out there who can really compete with those guys. I think psychologically, it will be good for Danny to be in with them.”

Quality sparring indeed, but will this really help Jacobs on fight night? The closer the fight comes, there does seem to be a growing consensus believing that Jacobs, if he cannot beat GGG, will at least give the 36-0(33) star his toughest test to date. Golovkin himself says this and fans are pumped for the March 18 fight in New York. Jacobs, beaten only by Dmitry Pirog (yet another Russian fighter, who stopped Jacobs in the 5th round way back in 2010) has no fear of Golovkin, as he has been keen to point out.

Maybe all of a sudden, this fight is seen as something like a a 60/40 affair (in GGG’s favour) as well as being one of the big upcoming highlights of this new year. Can Jacobs take Golovkin’s punching power? Can GGG take Jacobs’ power? Who is the better, faster boxer? Can this fight possibly go the full 12 rounds?

These questions and others will be answered in a little over two month’s time, but right now, Jacobs, 32-1(29) is doing everything he can in preparations to ensure his hand will be raised.