There is a first time for everything.

“The streak” is no more, but Berlanga is still undefeated. Berlanga, who had 16 consecutive first-round knockouts entering the night, was extended the eight-round distance by Nicholson. He dropped Nicholson four times en route to the near-shutout, and the reading of the scorecards was academic.

Berlanga said, “I feel amazing. It’s kind of fu—- up I had to go to the judges with all the people here. I know they wanted a first-round knockout, but I enjoyed getting the experience.

“It was an awesome experience for me. I caught him with an amazing shot at 10 seconds of the last round. I wanted to get him out! But I didn’t, but I got the experience, especially in front of my Puerto Rican people. It was good.” 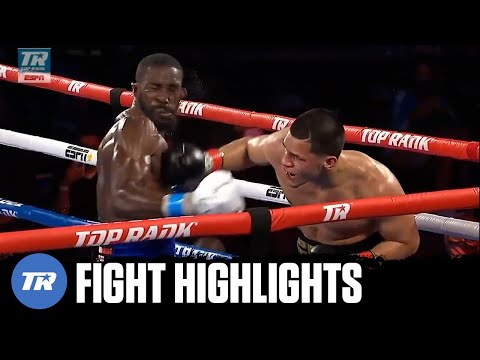 It was the first successful featherweight title defense for Navarrete (34-1, 29 KOs), who also reigned as WBO junior featherweight world champion. After the knockdown in the 12th, Diaz’s trainer, Nelson Rodriguez, threw in the towel.

Navarrete said, “I think we did put on a worthy performance (of Mexcio vs. Puerto Rico) because ‘Pitufo,’ I knew he was tough, I knew he was strong. And I knew he could hit hard, but he surpassed all my expectations. He brought out all the best in me and so I’ve got a lot of respect for Christopher ‘Pitufo’ Diaz.

“I was really impressed by ‘Pitufo’ because every time I hurt him, every time I dropped him, he came back stronger. He was a beast in there because he kept coming at me. He kept getting better even though I kept hurting him, and as the fight progressed, you’d expect him to get weaker but he kept getting stronger. I just couldn’t understand it. So I have the utmost respect for Christopher ‘Pitufo’ Diaz and what he did tonight.”

Diaz (26-3, 16 KOs) entered the fight having won two straight since a decision loss to Shakur Stevenson in a non-title bout. He landed 183 punches on Navarrete, but he was unable to seriously hurt the seasoned champion.

Diaz said, ” I’m very disappointed. I wanted to win. It’s a title shot. But next time. He’s a great fu—– fighter. He hit hard. We went to war. I made my best fight. I was in shape. Everything was good.

“I’m not a weak fighter. I always bring my heart with me. I came here to fight. I said I want to box but that guy, he’s a problem. We come here to fight, too. He caught me. My coach loves me like a son, and he stopped the fight.” 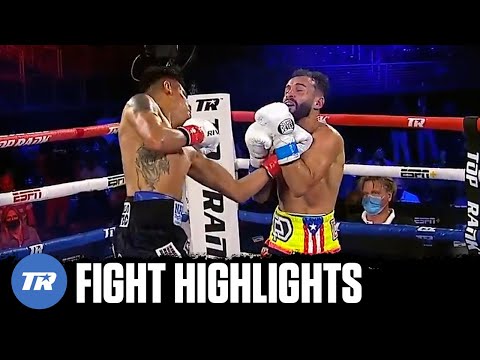 Vargas, the Puerto Rican-born contender who now fights out of the Bronx, New York, survived a rough patch when he was buzzed in the opening round. He then proceeded to outbox Shaw, a native of Oakland, California. Vargas has won 13 consecutive bouts since a controversial disqualification loss early in his career.

War. Eight rounds of fistic war. Adorno and Ortiz fought to a dead heat but combined to give boxing fans what will ultimately stand as one of 2021’s best fights. Adorno knocked down Ortiz with left hooks in the second and seventh rounds, but when Ortiz wasn’t on the canvas, he was muscling Adorno on the inside and ripping him with combinations. After nearly being knocked out in the seventh, Ortiz dominated the eighth round, sweeping the stanza on all three judges’ cards to salvage the draw.

Puerto Rico’s Gonzalez didn’t have it easy against Lopez, but a determined effort and a boost from the partisan crowd was more than enough.

Zayas tied his personal record for the shortest evening of his career, dispatching Arkansas native Layton in under a minute. A left hook started the onslaught, then another sweeping left planted Layton to the canvas. Referee Emil Lombardi saw enough and waved off the bout.

Zayas said, “This was amazing, something I was looking forward to for a long time. The last time I fought in front of a crowd, it was in Puerto Rico. Doing it here in Kissimmee, in front of my Puerto Rican fans, was memorable. First-round knockout, what else can I ask for?”

Junior Featherweight: Jeremy Adorno (5-0, 1 KO) MD 4 Ramiro Martinez (2-1-2, 1 KO). Scores: 38-38, 39-37 and 40-36. Adorno had the most difficult evening of his young career, returning from a 15-month layoff to edge Texas resident Martinez. Adorno was stunned in the second and fourth rounds, but his volume and clean punching told the story of the fight.

Junior Lightweight: Jaycob Gomez (2-0, 2 KOs) KO 1 Mobley Villegas (3-2, 2 KOs), 2:38. Puerto Rican phenom Gomez prevailed in less than a round, ending matters with a three-punch combination that put Villegas down for the 10-count. 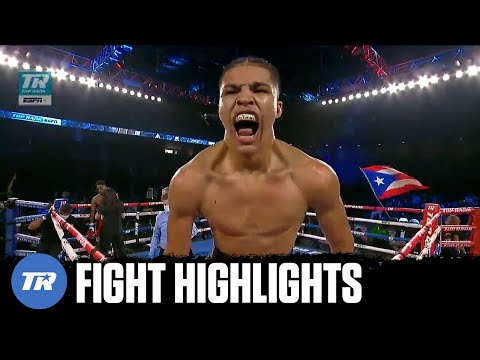