Hearn says Tank (27-0, 25 KOs) should listen to all offers, not just from his promotional company. He feels that Tank can do really well with other companies such as Matchroom.

The way that Tank was buddy-buddy with Mayweather Promotions Leonard Ellerbe after beating Rolly last Saturday night might not mean that he’s going to re-sign with them.

According to Hearn, it could have been the emotional high that Tank was on after the fight that caused him to act like he and Ellerbe will close pals.

“I haven’t seen the fight, but I heard he was behind on one of the scorecards. Rolly said he won every round,” said Eddie Hearn to iFL TV on Gervonta ‘Tank’ Davis’ win over Rolando ‘Rolly’ Romero last Saturday.

“I’ve seen the knockout. Gervonta Davis is a superstar, and you saw the crowd there. I think he’s now at the level.

When you talk about taking his career into his own hands, what a fighter that is generating that kind of attention will start doing is looking around the audience, thinking about the pay-per-view buys, and saying, ‘How much am I getting and how much is in the pot?’

“That’s why we always work on that model with our big stars where they receive the revenue for the fight, and they see everything. Is Gervonta Davis seeing the revenue he’s generating?

“It’s going to be really interesting to see what he does because if I’m Gervonta Davis, I want to see how much was generated at the gate. I want to know what was the pay-per-view revenue, and what was the sponsorship income.

“What were the global TV rights, and I want to make sure it was mine because how much money are other people making out of Gervonta Davis?

“I think he’s going to take control of his career, and obviously if he’s available, then we would love to work with him. After a fight, and I’ve had it before when the relationship with a fighter is stretched.

“After a fight, it’s always very paly-paly. Everyone is high on emotion, and ‘what a great night, and yeah, we’re going to stay working with you.’ But I don’t know. I don’t even know if he’s out of contract. You just don’t know.

“He’s one of the biggest stars in the sport. I’ve got a couple of mega-fights for him that we could make instantly that I know our broadcast partners would do everything they could to try and make that happen.

“Let’s see. He’s a very, very exciting fighter. I remember I was in the arena when I saw him beat [Jose] Pedraza for the title. He’s a special talent.

“Would it make me feel good to sign Gervonta Davis? Yes, from a business perspective and for my job with DAZN. It would be a major coup for DAZN and Matchroom to land Gervonta Davis.

“But I have to be honest with the way that people talk about me, I couldn’t lie that would add a little bit of sweetness to the pie. When we talk about fighters being overvalued because it’s such a dangerous sport, fighters should get everything they can.

“Commercially, as a business, we have to look at the value of a fighter in terms of the subscribers and pay-per-view revenue audience vs. bums on the seat and so many different elements.

“When you’re talking about overpaying people, you’re position in the market place can sometimes reflect your decision.

“So you’ve got the commercial value of a fighter, and you’ve got the value that adding that fighter can add to your business and your brand, which is above and beyond.

“I’ll give you an example. For Matchroom  Boxing USA to go and sign Gervonta Davis, how much extra value does that give our positition within the U.S market? Does it give my profile, our credibility beyond the actual value of that fighter.

“So, when you look at DAZN coming into the U.S market, we had to overpay all the time because we were chasing and trying to make a positition within the market and make big fights and sign big stars without the foothold that some had within the industry.

“Now, we’ve got Canelo and all these great fighters. We don’t need to do that anymore, but in certain situations, and this [Tank Davis] is one of them.

“You have to think above the commercial value of the fighter, and this would be a massive opportunity for us if we could sign Gervonta Davis.

“If it hasn’t, no problem. We don’t want to get involved. But if it has, he should talk to everybody because there will be some very, very interesting opportunities out there for him.

“In that instance, he’s stated publically that’s his last fight with Mayweather Promotions. So, therefore, you’d generally be able to in that instance, I would probably send him a DM, quite honestly.

“I would say, ‘What’s up, Tank?’ I would say, ‘Gervonta, look, if you are out of contract, we would love the opportunity to talk,’ that’s it. It’s been done. I’ve done it plenty of times before or you speak to someone that represents him or someone within the team.

“But what an opportunity. It couldn’t be a better time for him. If he is out of contract, what a time for him to land a deal. So, we shall see,” said Hearn. 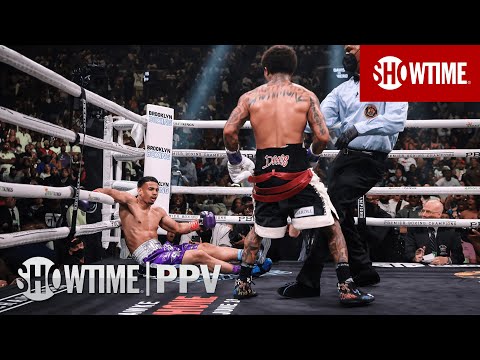