Eddie Hearn has responded to comments from Leonard Ellerbe, labelling the Mayweather Promotions CEO as irrelevant.

Speaking at a media workout ahead of Gervonta Davis’ clash with Rolando Romero in Brooklyn on May 28, Ellerbe was questioned about Davis’ calibre of opponents and when mentioning a possible match-up with WBC lightweight champion, Devin Haney, Ellerbe was critical of Haney’s previous promoter, Hearn. 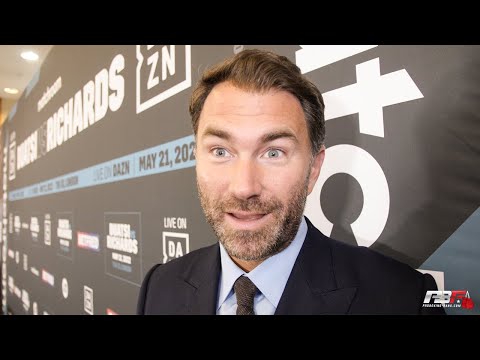 Haney’s last five fights were under Hearn’s Matchroom Boxing banner, however the 23-year-old signed a deal with Top Rank upon conclusion of his contract with Matchroom in order to face unified champion, George Kambosos Jr with their first meeting set to take place on June 4.

“I know Devin very well, a tremendous fighter, he grew up in this gym,” Ellerbe said in a video posted on FightHype.com.

“Excellent fighter. He signed with a promoter who don’t know what the f— he’s doing, he’s f—ed off over a billion dollars and still hasn’t built one f—in’ star in the United States.

“I applaud Bill [Haney], a very smart guy. And I applaud Devin. They signed with a guy, they made a bunch of f—in’ money, and that’s what they are supposed to do! But, again, it’s like ain’t no slight on them, but when you talking about Tank Davis I gotta pay you what you weigh.

“And you can just read in between the lines with that. It had nothing to do with Devin not being a tremendous fighter, but as far as being a draw, it’s self-explanatory. So you can’t make a fight like that.”

Hearn gave a scathing assessment of Ellerbe in response to the comments as well as denying comments he made suggesting that Hearn’s promotion of Canelo Alvarez’s shock defeat to Dmitry Bivol earlier this month did 300,000 pay-per-view buys on DAZN.

“If I don’t know what I’m doing, why am I 100 times bigger than Leonard Ellerbe?” Hearn told Pro Boxing Fans at a press conference on Thursday to promote his show on Saturday between Joshua Buatsi and Craig Richards.

“Why are we the biggest global promotional company in the world bar none? And Leonard Ellerbe is not even relevant actually in the boxing industry.

“When you talk about the top promoters in the world, do you mention Leonard Ellerbe? Let’s be honest, not in a millions years.

“He then comes out and says ‘oh, Canelo Alvarez only done 300,000 [pay-per-view] buys.’ Double it and add more and that’s how many buys [it did] and if you want, speak to DAZN and they’ll confirm it as well.

“This guy is hilarious. He is so angry, he has lost his mind. I need to take him out for a nice cup of tea, Leonard Ellerbe.

“But, how can you say this guy doesn’t know what he’s doing? Look at me, we’re the biggest in the game. What are you? Nothing, you work for Floyd Mayweather.”

Davis defends his WBA ‘regular’ lightweight title for a third time in a rearranged clash with Rolando Romero at Barclays Center on SHOWTIME pay-per-view.

’Tank’ posted on social media in March that his contract is up with Mayweather Promotions following this fight and Hearn says he will look to sign the unbeaten Baltimore man, should that be the case.

“Can you imagine if we sign Gervonta Davis?” Hearn added.

“But let me tell you, if Gervonta Davis’ contract is up and only then would we speak to him, what were we saying about those billion dollars? We’ve got to open up the case, baby!

“Because, I would definitely overpay to sign Gervonta Davis, just for the banter with Leonard Ellerbe.”