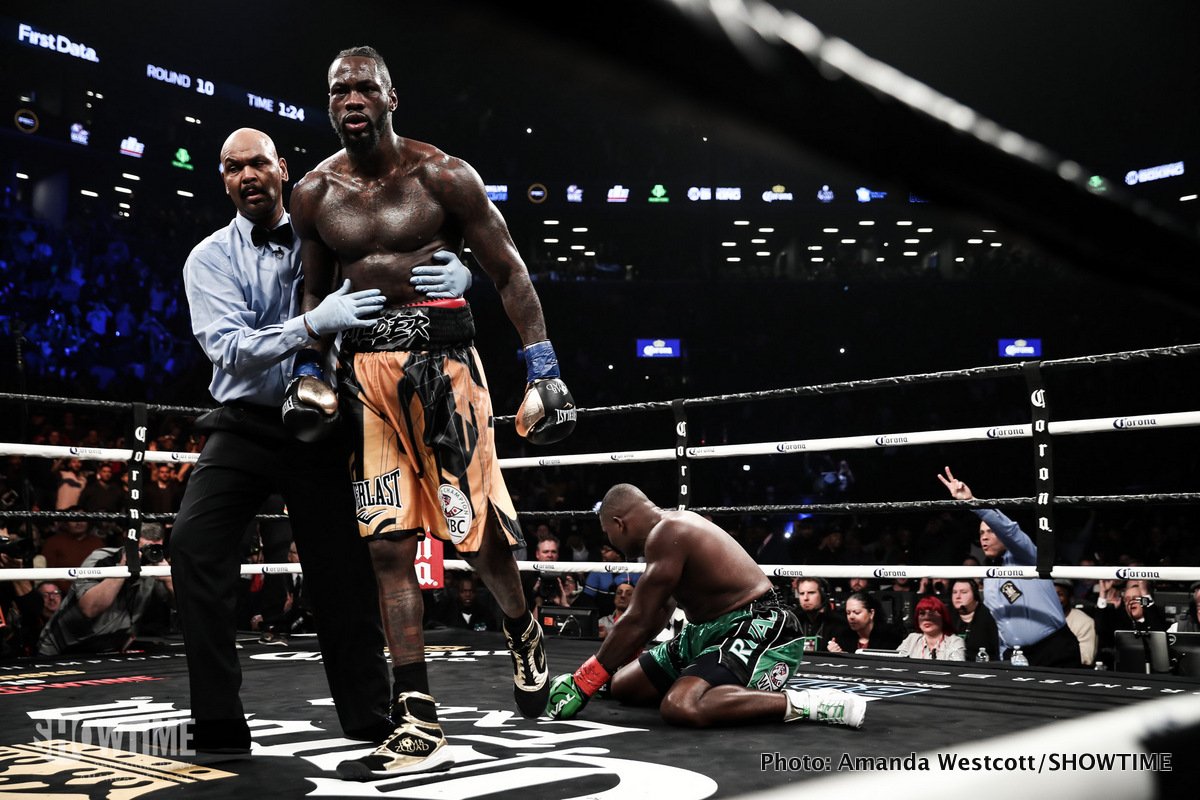 Eddie Hearn, promoter of course of WBA/IBF/WBO heavyweight champ Anthony Joshua, has responded to yesterday’s offer from Shelly Finkel, co-manager of WBC ruler Deontay Wilder – the offer being one to get the massive unification fight between the two rival champions on next; this summer, in the UK. “We’re ready,” Finkel said, adding how “there is no reason” the big, big fight does not happen next.

Hearn, though, is sceptical; and he says there is one big reason Wilder will not face AJ next, and this big reason is “Trouble.” Dominic Breazeale, AKA “Trouble,” will fight Wilder next, Hearn insists. Why? Because, as was reported last week, the IBF ordered Breazeale and Kubrat Pulev to fight a final eliminator, with the winner, logically, in line to then challenge AJ. But Breazeale has pulled out of this fight, Hearn says, and he has only done this because he has something better, something bigger in his immediate future: a grudge-match with Wilder (the two getting into a spat in an hotel lobby back in February of last year; Wilder saying he wants to “hurt” Breazeale, Breazeale telling this writer how he has “unfinished business” with Wilder).

Hearn, in speaking with The Star, said there is no chance Joshua and Wilder will fight each other next:

If Hearn is right, and Wilder does indeed make his next defence against Breazeale, how will fans react? It’s a good enough fight, with a story to it, but it’s not the big one we all want. With regards to that ordered IBF mandatory, the IBF has now ordered Pulev to fight Dillian Whyte, so as far as that goes, Whyte has yet another big option.

But what about Joshua-Wilder? Hearn says it could still possibly happen in November or December, but that it will be difficult to make the fight, because Wilder “has three managers,” three men who “feel they don’t need the others.”

“It’s difficult because Wilder has three managers – Al Haymon, Shelly Finkel and Jay Deas (also Wilder’s trainer). They don’t really like each other,” Hearn said. “I’m speaking to Al Haymon’s people. I have a good relationship with them and I can do business with them. But with Shirley (Finkel), I can’t see an agreement taking place because we don’t like the way he does business. Every time Shirley comes out in the media, it takes things further away and people don’t realise it’s really difficult.”

So what now? Finkel says he’s ready to “sit and talk” with Hearn, but Hearn has made his position quite clear: he will go through Haymon in an attempt to get the fight made. Are we really any closer, then, to seeing this fight get made?

Unfortunately, it seems as though the answer is no. Look instead for Wilder to indeed fight Breazeale next, most likely in New York, and for Joshua to next fight either Alexander Povetkin or Jarrell Miller, probably in the UK.